When three women of Korean descent were shot by a gunman at a Dallas hair salon last week, it was a stark reminder of the violence that has targeted the Asian community amid the COVID-19 pandemic.

The attack, which the women survived, came almost one year after President Biden signed the COVID-19 Hate Crimes Act, an effort to address hate crimes against Asian Americans and Pacific Islanders (AAPI) fueled by escalating anti-Asian rhetoric — including the words of former President Donald Trump — since the virus emerged from China.

Signed on May 20, 2021, the act focuses on strengthening relationships between police and the AAPI community through cultural competency and language training and improved hate-crime data collection. Though the federal government has been collecting data on hate crimes since 1991, reporting from thousands of state and local law enforcement agencies is voluntary, resulting in significant gaps. The expectation is that better data on the nature and magnitude of the problem will bolster hate crime prevention and prosecution. While the act specifically addresses anti-AAPI crime, all hate crime victims will benefit from funding incentives for state and local law enforcement authorities to identify, report and respond to hate crimes.

For the Southern Poverty Law Center, the legislation was an important step forward after decades of work combating the threat of hate crime. One year later, the act continues to hold great promise amid ongoing work by advocacy organizations such as the SPLC and the Leadership Conference on Civil and Human Rights.

“The COVID-19 Hate Crimes Act was the single most significant piece of legislation to improve federal hate crime data since the Hate Crimes Statistics Act of 1990,” said Michael Lieberman, the SPLC’s senior policy counsel for hate and extremism.

Still, because compliance by law enforcement agencies is voluntary, their reporting is incomplete and haphazard.

“There have been consistent reporting gaps for 30 years,” said Lieberman, who led the SPLC’s advocacy in support of the COVID-19 Hate Crimes Act and was among advocates who helped shape outreach and training under the Hate Crimes Statistics Act during his years as the Anti-Defamation League’s Washington counsel.

The problem is clear: Out of the more than 15,000 agencies that participated in the FBI data collection effort in 2020, only about 2,400 — less than 16% — reported one or more hate crimes. Every other agency, including almost 70 cities with populations over 100,000, reported zero hate crimes or did not report any data to the FBI at all.

The FBI defines a hate crime as a “criminal offense against a person or property motivated in whole or in part by an offender’s bias against a race, religion, disability, sexual orientation, ethnicity, gender, or gender identity.”

The COVID-19 Hate Crimes Act uses the carrot-and-stick approach to induce local and state law enforcement agencies to fight hate. To receive a piece of the hundreds of millions of dollars in funding the U.S. Department of Justice (DOJ) allocates annually, an agency must demonstrate a good faith effort to improve hate crime training and the collection and reporting of hate crime data. If they don’t, the DOJ may seek repayment of the grants.

“Data drives policy, so as our data gets better we will be in a better position to prevent, deter and, if necessary, respond to hate crimes, because we can then focus and allocate resources to hot spots,” Lieberman said.

What is apparent on the act’s anniversary is that there is still much work ahead, if the latest data and analyses are any indication.

Hate crimes against all Americans rose over 39% in 37 cities in 2021 over 2020. However, across 21 cities there was a 224% rise of hate crimes against victims of Asian descent during the same period, from 114 to 369. These figures were provided to the SPLC by the Center for the Study of Hate and Extremism at California State University in San Bernardino from its forthcoming publication Report to the Nation, which analyzes FBI data.

“COVID isn’t going away,” said SPLC President and CEO Margaret Huang, who attended the signing ceremony for the COVID-19 Hate Crimes Act and is the daughter of a Chinese immigrant father and an American-born mother. “Trump was an instigator, but the pandemic is still here. … Anti-AAPI sentiment isn’t going away.” 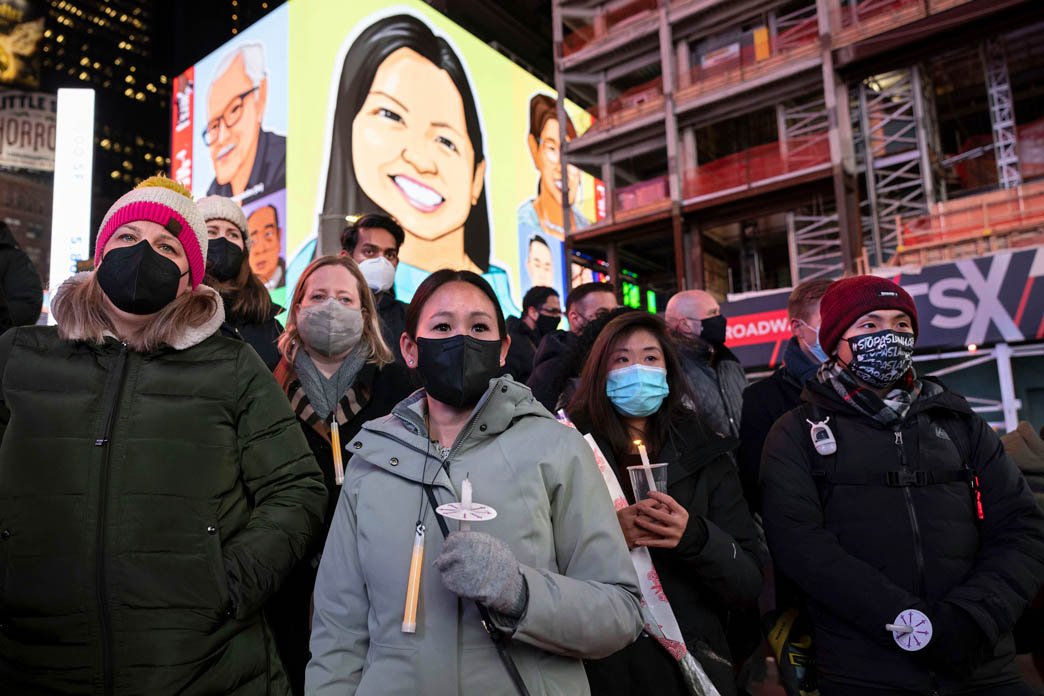 People hold candles during a vigil in New York's Times Square on Jan. 18, 2022, to honor Michelle Alyssa Go — her image pictured in electronic billboard in background — a victim of a subway attack. (Credit: Yuki Iwamura/AP)

In March, the SPLC submitted policy recommendations (SPLC Action Fund) as part of a Senate Judiciary Committee hearing on countering rising hate crime. Among them: that the DOJ enlist all 94 U.S. attorneys to help promote the reporting of hate crimes and civil rights violations in their jurisdictions. The SPLC also called for the designation of a person or team to lead these efforts and serve as a liaison between police and AAPI communities.

Successes and more to do

The DOJ held an event today commemorating the one-year anniversary of the act and announced actions to implement its provisions.

The department is releasing $10 million in grants for programs to create state-run hate crime reporting hotlines and to support community-based actions to prevent and address hate crimes. Eventually, 50 telephone hotlines with AAPI language-fluent speakers will be established, and anti-AAPI crime reporting documents will be translated into primary AAPI languages. The DOJ hate crimes website already includes sections translated into 20 AAPI languages. The DOJ also announced the appointment of its first language access coordinator to help improve knowledge, use and expansion of its language resources.

And new guidance was issued for law enforcement, government officials, community organizations and civil rights groups to raise awareness of hate crimes and to use it as a tool for prevention and response.

While stakeholders await other support to ramp up, some changes are already apparent.

A heightened awareness appears to be taking hold at the local level. New York state’s 2022 budget included $22 million to fight AAPI hate crime, and the New York City Police Department has adopted some practices into its Hate Crimes Task Force that are in the spirit of the act.

It’s an encouraging sign for U.S. Rep. Grace Meng of Queens, New York, co-sponsor of the act and the state’s senior member of the subcommittee that oversees DOJ funding. New York City had the biggest increase in anti-AAPI hate crime of the 21 largest U.S. cities, with a 343% spike between 2020 and 2021, according to Report to the Nation. 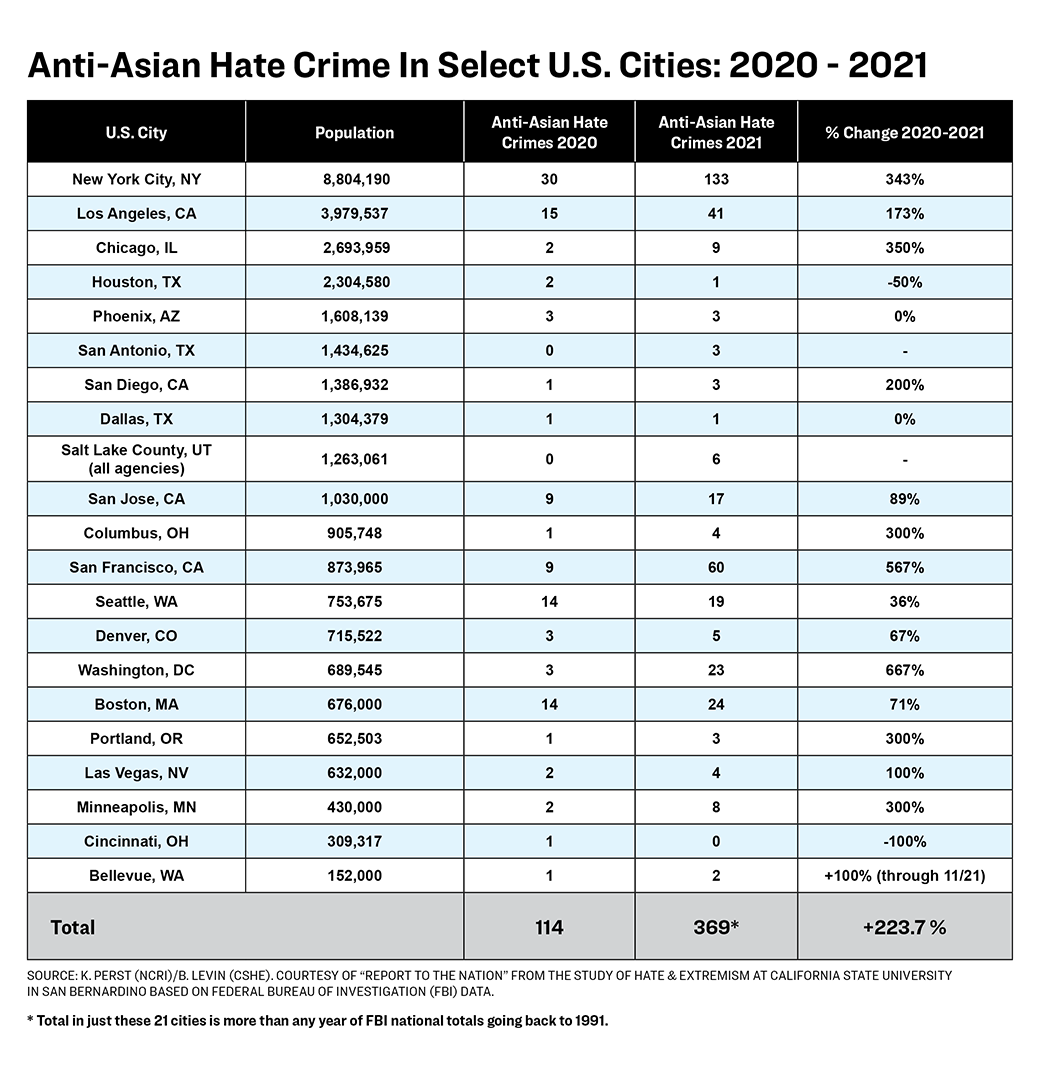 “The [act] was born out of my conversations with constituents,” Meng told the SPLC. “They have been spat on, stabbed, verbally abused, beaten, slashed and murdered. Asian American-owned businesses have been vandalized. Similar to the pandemic, everyone of Asian American descent has been impacted in a personal way, even if you don’t know someone who was attacked individually.”

Advocates of the act, however, recognize the limits of legislation.

“We aren’t going to legislate, prosecute, regulate or tabulate hate crime out of existence,” Lieberman said. “One of the SPLC’s fundamental strengths is teaching that diversity is strength and that by understanding the differences among Americans, we promote acceptance and diversity.”

The SPLC’s recommendations in March also encouraged the DOJ and U.S. Department of Education to enhance funding for community investment, education and prevention initiatives – particularly at the elementary and high school levels. It’s an initiative that’s especially important, as parents and others have grappled with the online radicalization of young people who have been homebound during the pandemic. The SPLC’s Intelligence Project and American University’s Polarization and Extremism Research and Innovation Lab have created resources to assist parents and caregivers.

The SPLC’s Learning For Justice (LFJ) program has also taken action to address anti-AAPI hate and stereotypes through education.

“These stats, among others, highlight the critical need for Asian American studies in K-12 schooling,” Blackburn said. “If we are invisible in the popular imagination, then stereotypes fill in the gaps instead, and these stereotypes uphold hatred and violence.”

Blackburn wrote an article for LFJ in 2019 recounting her childhood experience as an Asian American grappling with the “model minority” myth. LFJ also produced a 2019 webinar about teaching AAPI heritage and has published articles about opposing anti-AAPI hate through teaching and literature.

“A handful of states are starting to implement requirements to teach Asian American history in K-12 education. This is really new,” Blackburn said. “At the same time, we know that diverse perspectives — including diverse AAPI perspectives — are necessary as we raise a generation to treat difference as something not to be feared or judged, but something to be open to and to celebrate.”