It’s been seven years since a movement began building in small towns and big cities across the United States to take down Confederate monuments, honorariums and symbols of all kinds. People have chained themselves to statues, spent nights in the cold at candlelight vigils, performed spoken-word poems and testified at city council meetings.

The activists – young, old, often led by people of color but drawing from across the demographic spectrum – have faced ridicule and hostility from political leaders at all levels. Many have risked their lives when armed counterprotesters, some openly affiliated with the Ku Klux Klan and a broad range of hate groups, have fomented violence, beating protesters, torching their vehicles and worse.

There doesn’t seem to be anything funny about this movement.

But CJ Hunt, a comedian, director and former producer for The Daily Show, took a journey into the world of the people who venerate Confederate monuments and came out of it saying, “Hey, at some point, you just gotta laugh.”

Laugh, that is, at the absurdity, the irony, the – well, comedy of the powerful and the entrenched trying so hard to deny a racially progressive future for the United States by whitewashing the past. How else, Hunt challenges viewers in a documentary that is at its heart deadly serious, can you make sense of the sheer irrationality of a country’s veneration for a movement that literally sought to destroy it?

Hunt’s film, The Neutral Ground, was screened last month at the Southern Poverty Law Center’s Civil Rights Memorial Center in Montgomery, Alabama. In its recounting of the intense backlash against a decision by New Orleans to take down four of the city’s most prominent Confederate monuments, the documentary is poignant, impassioned, infuriating – and deeply absurd. In one segment, a modern-day Confederate reenactor tells Hunt that “the majority of the slaves” in the antebellum South “were not abused.”

In response, Hunt – himself Black and Filipino – just stares at the camera, deadpan.

“The role of comedy is to try to help show absurdity, and we’re sort of at a point in this country where white backlash is at its highest,” Hunt said. “There’s an element of absurdity to that. And I’m trying to use comedy to highlight that and to make that really clear.”

A former middle school teacher, Hunt embarked on the film in 2015 while he was still living in New Orleans. That year, amid what was then characterized as a period of racial reckoning, the city council voted 6-1 to remove four prominent Confederate monuments. In the film, released last year on Juneteenth, Hunt tracks the backlash that ensued. It took two years for the statues to finally be removed.

As the film begins, foes of removing monuments argue that they should be maintained to “preserve history,” with the ugliness of the past given context. As the movie progresses, however, so does the mood of the country, with demonstrations to keep the monuments in place taking on increasingly racist overtones. The film shows Hunt in Charlottesville, Virginia, in 2017, witnessing the racist “Unite the Right” rally. There, when he stares into the camera as torch-bearing white nationalists march behind him, it is not with incredulity, but terror. The film ends in 2020 with footage of Confederate statues being removed around the country after the murder of George Floyd.

Over the past year, in what Hunt calls the ultimate irony, the backlash over a full history of the United States has become so intense that conservative governors and majority-conservative legislatures have passed new laws sharply restricting discussions in schools of the history of race in the U.S. That means a classroom screening of Hunt’s film, which takes on the whitewashing of history, may itself violate laws in at least 14 states.

“The film is really clear that Confederate monuments are chiefly a problem because they demand a certain type of amnesia about the past,” Hunt said. “My fear is, what does that same amnesia look like when it is mandated by law? Does it matter that the statue of [Confederate Gen. Robert E.] Lee is down on Monument Avenue in Richmond if the governor of Virginia is making it illegal for kids to learn that Lee openly stated that he believed Blacks were better off in slavery?”

Amid such questions, two young activists joined Hunt at the Montgomery screening for a panel discussion of the film. The activists epitomize the courageous, grassroots movements around the country demanding reckoning for the shame the monuments represent.

Unique Morgan Dunston, 25, led protests demanding the removal of two monuments to the Confederacy in rural Marshall County, Alabama. The peaceful protests so irked the powers that be there that the county council passed a resolution in their wake sharply restricting protests on the land where the monuments stand.

Courtney Symone Staton, 24, was a student at the University of North Carolina at Chapel Hill when she helped organize the movement that ended in the dismantling of the Confederate monument on campus known as “Silent Sam.” Today a filmmaker and community organizer, Staton is also an impact producer on the documentary.

“I think it’s revolutionary to laugh – for Black people to laugh, specifically,” Staton said. “Racism is ridiculous. The fact that we have to deal with racism is ridiculous, every piece of it is ridiculous. It’s unfounded, it shouldn’t exist. It is so ridiculous that you have to disempower it by poking fun at the inconsistency. And that can unmask the solemn gravity of what you’re experiencing.” 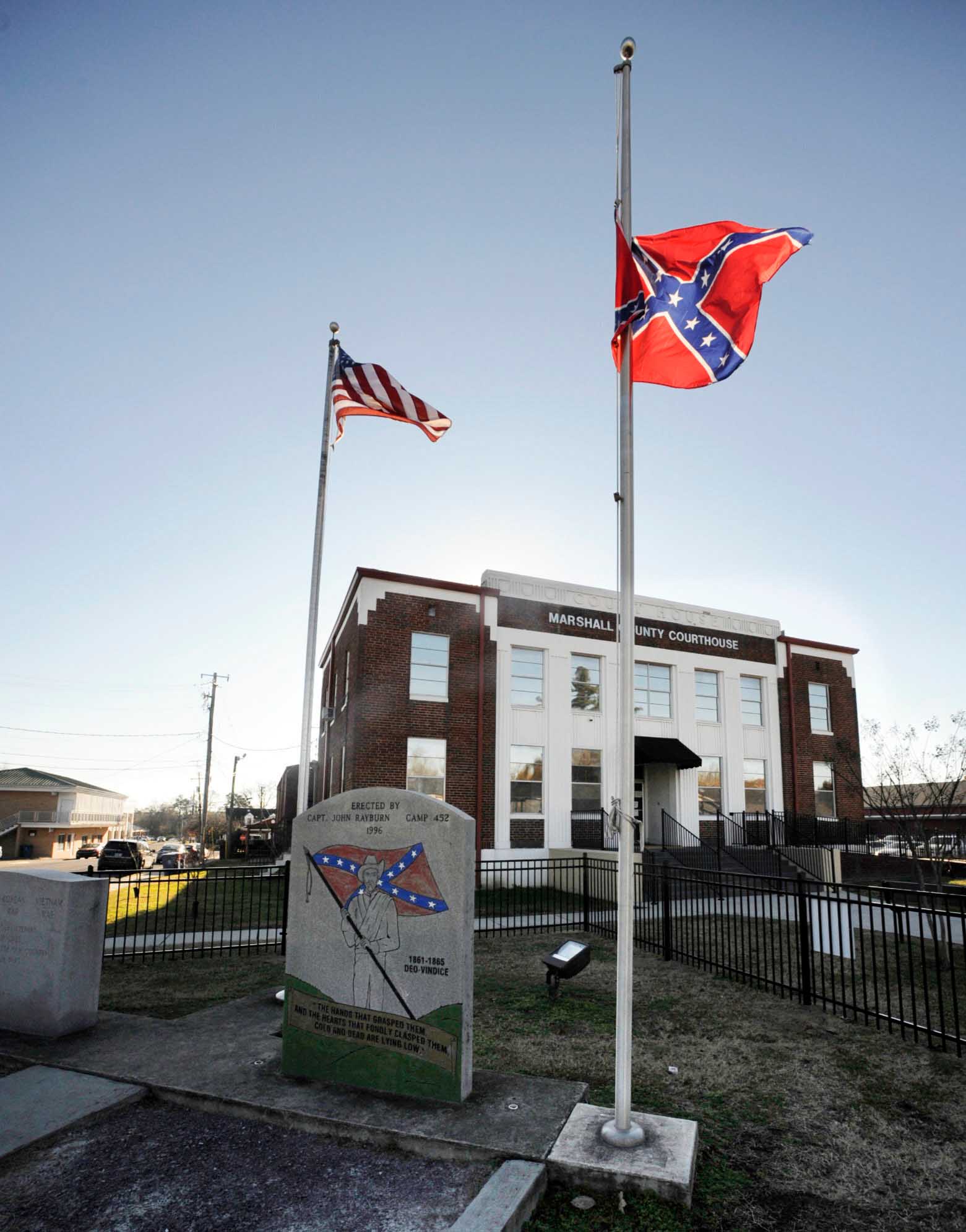 A Confederate monument and rebel battle flag are flown outside the Marshall County Courthouse on Wednesday, Dec. 9, 2020, in Albertville, Alabama. Unique Morgan Dunston, a Black woman transformed by leaving the virtually all-white town where she grew up, has been leading demonstrations against the Old South commemoration since August. (Credit: Jay Reeves/AP Photo)

The SPLC has been in the forefront of that unmasking, since 2015 tracking the history of honoring Confederate figures in a public database and supporting community efforts to remove such monuments and markers. In February, the SPLC stated in the most recent edition of its report, Whose Heritage? Public Symbols of the Confederacy, that 2,089 Confederate memorials could still be found throughout the United States and its territories.

SPLC data shows that most Confederate memorials were erected in the wake of Reconstruction during the Jim Crow era, reinforcing arguments by historians that they were part of an organized propaganda campaign to promote the “Lost Cause” and venerate the white supremacist values of the Confederacy.

In addition to monuments, in the U.S. today the SPLC data shows there are more than 740 roadways honoring Confederates, more than 200 schools, and more than 100 counties and municipalities. Confederates are also honored by more than 50 buildings, more than 35 parks, seven commemorative license plates and six bodies of water.

“SPLC’s work is foundational to this film, and to all this work,” Hunt said. “SPLC armed us with the data, the language, the legal strategy. They bring the receipts.”

In Marshall County, where Dunston lives, there’s been little, if any, appetite among elected officials for removing monuments. The rural county, with a population just 3% Black, is also deeply conservative.

Dunston moved away from home to attend college in Mobile, Alabama. Inspired by Colin Kaepernick, she organized Black students at her university to sit through the national anthem at a football game to protest deadly police violence. In 2020, she became a community activist, founding a nonprofit that advocates for racial and social justice. This year, she organized a food pantry for needy residents of Marshall County. And she began leading a small group that peacefully demanded the removal of two monuments at separate county courthouses that honor Confederate soldiers who died in the Civil War.

The monuments are hardly heritage pieces. The Confederate monument currently standing in front of the Marshall County Courthouse was erected in 1996 and moved to the courthouse in 2000. A Confederate flag was added to the site just five years ago.

Dunston says that while there is an argument to be made for honoring ancestors, there is no place for such a monument on the grounds of a courthouse. She, Hunt and Staton share the view of the SPLC and other civil rights groups that Confederate monuments on public land, erected as expressions of white supremacy, are in violation of the equal protection clause of the 14th Amendment to the Constitution, ratified in 1868 to grant citizenship and equal rights to formerly enslaved people.

“The truth of the matter is that those ancestors fought to keep my ancestors enslaved,” Dunston said. “The place where we go to hopefully receive justice, which is the courthouse, is not the place to honor them.”

Though the monuments still stand, Dunston said that the work of Hunt, along with that of the SPLC, brings her hope.

“Being surrounded by people who have the same goals as me, it makes me feel hopeful that the monuments in Marshall County will come down,” Dunston said. “Even if I’m the first person to start tilling the ground and planting the seed, I do believe that if necessary, there will be people after me who are willing to pick up the work and get it done.”