Terrance Winn was just 17 when he was sent to Angola in Louisiana, one of the country’s most infamously brutal prisons, built on the site of a former slave plantation.

As his first job, the Black teen was ordered to pick cotton.

“As soon as I reached Angola, I went from reading about slavery in my history book to becoming an actual slave,” Winn said. “My first mandatory job was literally picking cotton. While the Black prisoners spent eight hours a day of hard labor in the cotton fields, white prisoners primarily worked inside doing jobs like maintenance and laundry. This is still in practice today.”

Winn told his story earlier this month in Geneva, Switzerland, where he testified before the United Nations Committee on the Elimination of Racial Discrimination (CERD).

As part of a Southern Poverty Law Center delegation, he told the committee how, at 16, he was sentenced to life in prison without chance for parole, but two white defendants who committed the same kind of crime were sentenced to eight and 10 years.

And he told of the horrors he endured during his 30 years at Angola, including being locked in solitary confinement six times, once for 13 months, for nonviolent offenses such as refusing to engage in slave labor.

Winn was finally released two years ago following a series of legal changes regarding life sentences for juveniles. Now, at 48, he is executive director of a nonprofit organization he created in his hometown of Shreveport, Louisiana, that advocates for the wrongfully incarcerated and seeks to help keep young people out of prison by offering alternatives to life on the streets.

I was proud to stand with Winn in Geneva as part of a four-person SPLC delegation that worked throughout the week of Aug. 8 – along with a coalition of more than 70 advocates from U.S.-based nongovernmental organizations (NGOs) – to provide documentation to CERD of ongoing racial discrimination and disparities in the U.S.

Winn and I were accompanied by SPLC Chief Policy Officer LaShawn Warren and Page Dukes, a formerly incarcerated Georgia woman who since 2019 has advocated for voting rights and other issues at the Southern Center for Human Rights.

We believe the SPLC and the dozens of other advocates made a powerful impact as CERD reviews U.S. compliance with the International Convention on the Elimination of All Forms of Racial Discrimination, a treaty signed by 128 countries.

The committee will issue its conclusions to the U.S. at its closing session on Aug. 30. It will identify key recommendations that the U.S. will be expected to implement and report back on within one year.

Review of racism in the US

In addition to the CERD briefings, the team met with staff members from other U.N. offices, including the Office of the High Commissioner for Human Rights, the Special Rapporteur on Racism and the Working Group of Experts on People of African Descent.

In her statement to CERD, Dukes told members that while Black people comprise about 30% of the population of Georgia, they make up 60% of those who are denied the right to vote due to the state’s felony disenfranchisement law, a remnant of the Jim Crow era.

Dukes, who is white, told how she was able to terminate her probation early and regain her voting rights while so many others – most of them Black – cannot do so. Since her release from prison in 2017, Dukes has become a community activist in the fight to overturn laws prohibiting people from voting because of a criminal conviction.

“On its face my story is a success story,” Dukes told CERD, “but it shows how arbitrary and unequal the rights restoration process can be, and how one person on probation – in a state that keeps more people under its thumb than any other – was able to successfully advocate for myself in court, with the support of my colleagues and my sentencing judge, while many others face insurmountable odds to achieve the same level of freedom and representation.”

In their dialogue with the delegation from the U.S. government, CERD members echoed many of the concerns and issues we raised in our reports and statements.

Members pointedly addressed concerns, for example, about the U.S.’s failure to incorporate the anti-discrimination treaty into domestic law or policy and to create a national human rights institution to oversee its implementation and the committee’s recommendations. Members specifically expressed concerns about the Biden administration’s failure to even mention the treaty in the president’s Executive Order on Advancing Racial Equity and Support for Underserved Communities Through the Federal Government or in the resulting agency plans.

It’s an issue we not only included in our report but have repeatedly raised during consultations with the U.S. government.

In addition, the committee expressed serious concerns about the erosion of voting rights in the U.S. and urged the Biden administration to devote all possible resources to protecting the right to vote and combating the onslaught of state-level voter suppression laws. It specifically called for measures to strengthen the right to vote; to ensure that states modernize processes and strengthen mail, early voting and ballot access; to prevent gerrymandering; and to stop artificial and unnecessary ID requirements and manipulation of polling stations.

The committee pressed the U.S. government on many other issues, as well, including education and health care inequities, the incarceration and abuse of migrants, the underreporting of hate crimes and much more.

Reflecting material from the SPLC’s main report, the committee urged the U.S. to develop a national plan to combat school segregation and specifically identified discriminatory local funding schemes as an area of concern. Members also sought commitments for specific measures to ensure that teaching is aimed at promoting respect for all cultures and that instruction includes “the forms and consequences of racism” and legacies of slavery. 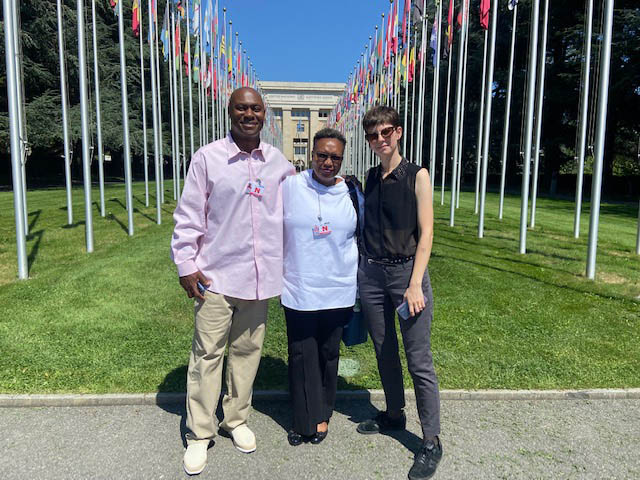 The SPLC-authored Southern Prisons Coalition report (SPLC Action Fund) prompted the committee’s request for more information and for a U.S. plan of action on solitary confinement and forced labor, like Winn experienced at Angola. Specific reference was made to labor conditions that recall slavery and to the fact that wage, safety and health protection laws for workers don’t apply to incarcerated people.

The U.S. delegation’s responses to these inquiries were, much like their responses to NGO concerns during pre-review consultations, general and somewhat vague.

Pansy Tlakula, the committee’s country rapporteur for the U.S., pointedly called out the lack of substantive responses and gave a laundry list of topics on which the committee wanted more detailed written responses within 48 hours. Unfortunately, NGOs will not be privy to those responses unless the U.S. chooses to publish them.

Though CERD has no authority to enforce the treaty on the elimination of racial discrimination or its own specific recommendations, its periodic reports can put pressure on governments like the U.S. to act in order to avoid global and domestic condemnation.

In her closing remarks, Tlakula noted that she grew up under apartheid in South Africa and knows all too well that we can only put racism to rest if we acknowledge it, talk about it and adopt concrete measures to combat it.

That was the goal of our work in Geneva.

The SPLC plans to engage closely with the administration and other NGOs to press for full implementation of CERD’s recommendations and for much more comprehensive civil society consultation in the process.