When Lecia Brooks, the Southern Poverty Law Center’s chief of staff and culture, first moved from Los Angeles to Alabama in 2004 and was suddenly confronted with pervasive symbols of the Confederacy, she understood that white people were sending her a stark message.

“I thought, ‘Oh, my God, what are you trying to tell me? What is the message when I would see these images everywhere?’ And the message I received, as a Black person, was, ‘OK, we are still here, and we are watching.’ ”

Now when Brooks drives to work in Montgomery, Alabama, from her rural home just outside the first capital of the Confederacy, she remains daunted by the common sight of Confederate flags and “Let’s go, Brandon” and Trump signs scattered along roads and in people’s yards.

Yet, the results from a new survey of Americans’ views on Confederate iconography paint a more nuanced, complex and somewhat hopeful picture.

The results were unveiled in September during a panel discussion, “The Role of Religion in Creating More Inclusive Public Spaces,” at the historic St. Charles Center for Faith and Action in New Orleans. Brooks, representing the SPLC, was among the panelists.

The survey of nearly 5,500 American adults – just over 400 of whom live in 13 Southern states – was designed by the Public Religion Research Institute (PRRI) as part of a partnership with E Pluribus Unum (EPU), a nonprofit, nonpartisan organization whose mission is to build a more equitable and inclusive South. EPU was founded in 2018 by former New Orleans Mayor Mitch Landrieu, who in 2017 removed four prominent Confederate monuments from the city’s public spaces after a yearslong, controversial effort.

The survey results show that about 75% of all Americans agree that Confederate monuments should not remain as they are but should either be contextualized in place with historical information, moved to a museum or destroyed.

Ninety-six percent of the respondents believe that public spaces should be more welcoming to people of diverse backgrounds and ethnicities. Ninety percent believe that the history of slavery should be told, and nearly half of Americans, regardless of political party or religious affiliation, agree that the values that should guide the creation of new monuments in public spaces are service to the community, our foundation as a nation of immigrants and patriotism.

Beyond that, however, the survey found vast partisan and religious chasms. Republicans stood apart from independents and Democrats. And there are massive religious divides between white evangelical Protestant Christians, who are most prominent in the South, on the one hand, and the religiously unaffiliated and Black Protestants on the other.

More than any other factor, the survey found that political partisanship influences Americans’ views on race and Confederate symbols even more than regionalism – a linkage consistent with the steep rise in political polarization between Republicans and Democrats.

Nearly seven in 10 Republicans self-identify as white Christians, according to PRRI’s 2020 Census of American Religion. The survey found that Republicans prioritize patriotism as their core value when thinking about monuments in public spaces and scored twice as high as Democrats on a “structural racism index” developed by Robert P. Jones, president and founder of PRRI.

The Republicans’ responses showed a high correlation between racism and their views on monument reform. (A little over a third of the country’s Democrats are white Christians.)

Black Protestants identified racial equity as the core value that should guide the creation of monuments in public spaces. Black respondents in general view Confederate symbols as a sign of racism by a 2-to-1 margin over white respondents. The survey also showed that white Christians are less aware of their community’s Confederate symbols than Black Christians.

On the question of whether respondents feel pride about Confederate monuments, 38% of Republicans agree, compared to 16% of independents and 14% of Democrats.

“The survey shows that in many ways we are still having this long discussion about who we are as a country and what values should guide memorials in public spaces,” said Jones of PRRI during the panel discussion.

“It comes down to this fundamental question: Is the country this vision of a white, Christian America – America as a promised land for European Christians – and everyone else is second class if you don’t share the same identity? Or are we a country where everyone stands on an equal footing before the Constitution?”

The PRRI-EPU project sought to answer these and other questions, because the first step for communities in tackling the controversy over Confederate symbols is to acknowledge the deep pain they cause Black Americans and their passive disregard by most white, Christian Americans.

In the South, especially, these memorials abound in public spaces one is apt to pass on a regular basis. The SPLC’s Whose Heritage? Public Symbols of the Confederacy project keeps a running tally of extant Confederate monuments and other symbols that venerate the “Lost Cause” and its heroes. More than 2,000 such symbols remain in place, according to the most recent Whose Heritage? update.

“Part of the work of religion to create more inclusive spaces is realizing that it was white Christians that created those Confederate monuments,” said Jones, whose 2021 book White Too Long: The Legacy of White Supremacy in American Christianity was an American Book Award winner.

“Almost all of them [monuments] had blessings of churches and preachers praying, children’s choirs from the local Baptist churches singing at the dedications. That’s the image, right? It was about preserving this white, Christian America. This is all interwoven. And we still see this today. … If you take your average white Americans and you add the Christian identity, they move up the structural racism [survey] scale and not down.” 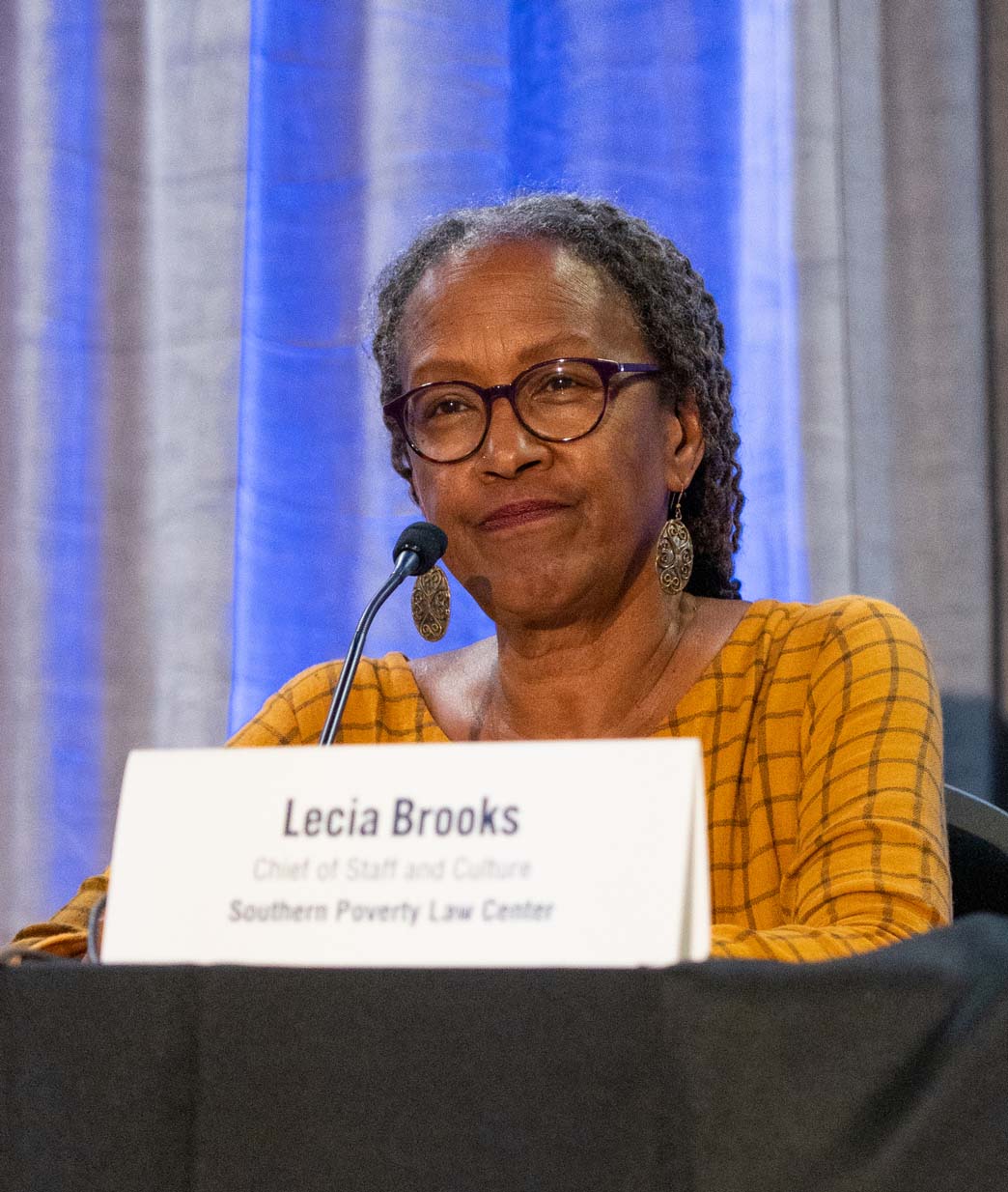 Confederate monuments "cause tremendous damage to the psyche of African Americans" and "should not exist in public spaces," says Lecia Brooks, the SPLC’s chief of staff and culture. (Credit: Leslie Gamboni)

At the panel discussion, the SPLC’s Brooks recalled the 2015 massacre at the “Mother Emanuel” AME Church in Charleston, South Carolina. Dylann Roof, then 21, was motivated to indiscriminately slaughter nine parishioners by his white supremacist, Christian worldview and “fetishized Confederate iconography,” Brooks noted. It was that massacre that spurred the SPLC to launch its Whose Heritage? project in 2015 and sparked a nationwide movement to remove Confederate flags and other symbols from public spaces.

Two years later, the death of Heather Heyer at the Unite the Right rally in Charlottesville, Virginia, again shocked the nation as a violent sea of white supremacists surged around the city’s immense Robert E. Lee monument in Emancipation Park (known as Lee Park until June 2017) to “save it” from removal.

Then came George Floyd’s murder by police in Minneapolis, Minnesota, in 2020. His videotaped, tortured and prolonged suffering before his last breath reignited the national public conversation surrounding Confederate symbols. Americans, regardless of color and geographic region, who understood that these symbols pained Black and Brown people, demanded the removal of – and in some cases themselves tore down – Confederate monuments.

“When we first started the Heritage project, we had the position that these monuments should be moved to museums or archives,” Brooks explained. “We never advocated to destroy them. Now we just want them removed. If a museum wants to host them, that’s fine. Our position is that they cause tremendous damage to the psyche of African Americans and that they should not exist in public spaces. This is a really serious thing that gets into the space of people who have to look at these monuments and memorials, at [statues of] people who fought to enslave my ancestors.”

Otis Pickett, an EPU eminent scholar and historian at Clemson University, said that the answers to many of the questions the survey posed “circle back to history.”

Pickett recommended that white Christians be reminded that their religion stresses the “love thy neighbor” principle. If they harbor racist views, they are based on “partisanship, not theology,” Pickett said.

Panelist Becky Meriwether, a St. Charles Center for Faith and Action board member and social justice advocate, is helping draw attention to the historic role of Confederate monuments in racial killings through her work on the Center’s Orleans Legacy Project in conjunction with the Equal Justice Initiative in Montgomery.

Meriwether described herself as a Southern white Christian whose ancestors enslaved people and embodied the westward expansion known as Manifest Destiny – ancestors who “literally sent Cherokees on the Trail of Tears,” helped to found the United Daughters of the Confederacy and spread the “Lost Cause” concept.

Meriwether said she felt a personal responsibility to help create a different future than our country’s racist past and proceeded to describe a four-day reign of terror – known as the Robert Charles Riots – unleashed against Black New Orleanians in 1900 that began when two innocent Black men were accosted by three white policemen. White mobs that roamed the city and terrorized Black communities “gathered spontaneously at Lee Circle,” Meriwether said – more evidence of the violent inspiration that white supremacists draw from Confederate monuments.

“The challenge is that these monuments are linked to deep, deep attitudes around race and the past effects of discrimination and slavery on the present,” Jones said.

As PRRI and EPU refine their research and develop policy surrounding Confederate monuments, the next step in the 18-month project will begin in 2023 when EPU engages faith and community leaders and grassroots activists in the South. The project is being funded by a grant from the Mellon Foundation as part of its Monuments Project.

EPU Director of Engagement Kia Bickham will direct the effort. She said that the new survey results “reveal that Black Americans are much more comfortable discussing race today.” Interestingly, EPU’s previous research in “Divided by Design” found that Sunday, a common day of worship, was the most segregated day of the week in the South. “Our places of worship may have divisions, but we are encouraged as our shared faiths call for hope and unity for all,” Bickham said.

Brooks, too, said during the panel discussion that she was “pleasantly surprised [to learn from the data] that Black people don’t want to destroy monuments … because the discussion becomes quite binary on destroy or keep, right? Because [white people will assume that] Black people don’t want to keep them, so they must want to destroy them. And it just comes with the images of [Black] people destroying things.”

As Jones recounted to the SPLC the long history of white supremacy, he said that former President Donald Trump’s motto, “Make America Great Again,” invokes a country that was a promised land for white, European Christians who are no longer in the majority.

“I dub it the ‘Great white Christian freakout. … [White Christians] do realize that the country has changed. The desperation to hang on gets increasingly visceral as the demographics continue to shift.”