To view this report as a .pdf, click here.

Despite record budget deficits, Florida’s Department of Juvenile Justice continues to spend enormous sums of taxpayer dollars on expensive residential institutions. These institutions hold thousands of children who could be better served in less expensive, more effective community-based programs — programs that hold youth accountable, protect public safety, produce better outcomes for children and families, and make it more likely that children go on to become productive and employable members of society. This fiscal year, the state is on track to spend $70 million to incarcerate children for something other than a felony. For more than 1,100 of these children, a misdemeanor is their most serious offense.

Not only does Florida incarcerate too many children, but children in residential facilities stay too long. The average length of stay increased by 30% from 2000 to 2008 — a trend that cost the state nearly $20 million last year. Simply by moving closer to its published best practices, DJJ could safely accommodate a $49 million reduction to its residential budget, close more than 1,000 beds, and re-invest a portion of the savings in cost-effective community- based sanctions that would not just preserve, but enhance, public safety.

Most importantly, the $240 million the state spends on residential facilities each year is not making Florida safer, but instead more vulnerable. Residential facilities have higher recidivism rates than community-based alternatives, and repeated studies have proven that institutional programs make low-risk children more likely to re-offend. The practice of holding children in facilities longer is also dangerous. The Blueprint Commission summarized the best research when it concluded that children “who are kept in programs for prolonged length of stays after treatment goals are achieved often begin to deteriorate and may be more likely to re-offend once release is finally achieved.”

Although Florida continues to spend heavily for expensive and often antiquated residential facilities, the state has also pioneered some of the more effective and efficient approaches to juvenile delinquency. Redirection, an alterative to incarceration, produces better outcomes than incarceration at significantly less cost, saving the state more than $50 million in the past five years. By divesting from expensive residential facilities, Florida can improve outcomes for youth, promote public safety, save tens of millions of dollars, and initiate a self-sustaining cycle in which reform not only pays for itself, but also generates additional cost-savings.

When It Comes to Youth Incarceration, Florida is out of the Mainstream

In 2006, the time of the most recent national survey, Florida incarcerated children at a rate 50% higher than the national average. Only Texas and California, the most populous states in the nation, had more children in residential placement — and both states incarcerated far fewer youth on a per capita basis.3 Recently, Florida has taken some preliminary steps toward a more efficient allocation of juvenile justice resources. Commitments to residential facilities have fallen 30% and the Department of Juvenile Justice (DJJ) has closed more than 1,800 beds — a reduction that saves the state $85 million every year.4 As the state cut beds and saved millions of taxpayer dollars, serious juvenile crime dropped dramatically — by 25% since 2006.

Despite these initial steps in the right direction, Florida needs to do more. Florida’s juvenile justice system is still far from the mainstream, and far from doing the best it can to protect public safety by effectively and efficiently rehabilitating youth. By any standard, the state overutilizes expensive residential facilities, pulling thousands of children out of their homes for non-violent offenses.

Residential facilities, which cost the state $109.22 per child per day for non-secure and $155.98 per child per day for secure facilities, consume scarce resources that could be better used to fund more effective and less expensive community-based interventions. Cheaper and better programs like Redirection, a cost-efficient and effective community-based program that has saved the state $50 million since 2005, have seen their budgets threatened, while the DJJ unjustifiably continues to throw good money after bad, spending $240 million for residential facilities in FY2010-11.

Today, nearly 4,000 children are confined in residential facilities in Florida. The vast majority of those youth are incarcerated for non-violent behavior. There is no question that many of these children could be served more efficiently and effectively without being removed from their homes, schools, and families. 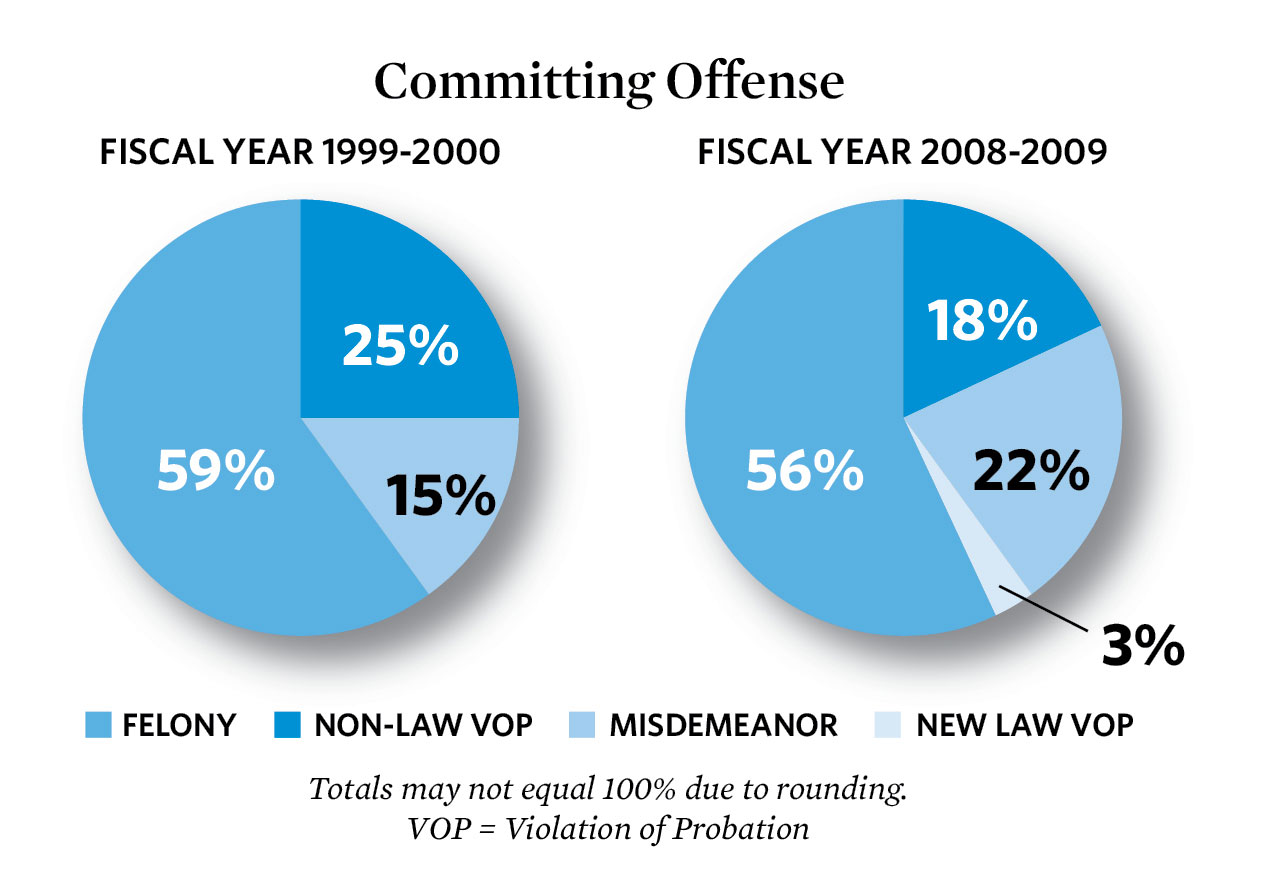 Although the number of children committed to DJJ fell over the past decade, the percentage of committed children who pose little threat to public safety remains high. In 2001, The Office of Program Policy Analysis and Government Accountability (OPPAGA) released a report finding that misdemeanants and non-law technical probation violators accounted for 41% of all committed children. Despite falling crime and reduced admissions over the past nine years, misdemeanants and technical probation violators still make up 40% of children admitted to DJJ.

A recent analysis of FY2008-09 admissions revealed large subsets of committed children who could be better treated in less expensive and less restrictive alternatives to incarceration:

Expensive and intensive residential treatment should be reserved for serious offenders. Misdemeanants and probation violators pose little risk to public safety, and placing them in expensive residential facilities consumes scarce resources that would be better spent on high-risk youth. After Texas, North Carolina, and Virginia adopted legislation banning the commitment of misdemeanants, all three states experienced a decline in juvenile arrests for violent offenses. In North Carolina, juvenile violent arrests fell 20%, and in Virginia, they fell 36%.

Today, children incarcerated in residential facilities stay more than two months longer than children did in FY2000-01, amounting to a 30% increase in average length of stay. Because children stay in facilities longer, the state has been unable to realize all of the potential cost-savings from reduced admissions. The cost of maintaining extra beds for children who are staying longer was $18.6 million in FY2007-08.

Increased lengths of stay not only hurt the state’s bottom line, they also harm public safety and run counter to what DJJ has identified as best practices. As previously noted, the Blueprint Commission concluded that children held for prolonged lengths of stay “often begin to deteriorate and may be more likely to re-offend.” The longer a child is removed from her school, her community, and her family, the harder it is for her to re-integrate, placing her at greater risk of re-entering the system.

Because children are currently staying in expensive residential facilities longer than is effective, DJJ could accommodate a $49 million reduction to its residential services budget simply by moving lengths of stay closer to best practices. Reducing lengths of stay would allow DJJ to close beds and realize substantial cost-savings while simultaneously improving outcomes for youth and promoting public safety. The privatized nature of Florida’s residential facilities provides the flexibility to reduce capacity quickly and economically. Unlike most juvenile justice systems, more than 80% of the beds in Florida’s network of institutions are run by private companies — most of which operate as for-profit corporations.

A Share of Savings Should Be Re-Invested in Alternatives

Florida is home to a number of innovative programs and approaches to juvenile delinquency that deserve to be expanded. OPPAGA has clearly shown that Redirection, which currently operates in 41 counties, significantly reduces the chances that a child commits a serious offense or goes to prison. Since 2005, Redirection has saved the state $51.2 million in juvenile incarceration costs alone. The program has also allowed the state to avoid countless additional costs that are substantial but difficult to quantify, including the costs to crime victims, to society in general, and to the state’s adult correctional system. Redirection’s undeniable success — effectively rehabilitating youth while saving the state money — mandates taking the program statewide and expanding it to the type of children who are currently being committed to residential facilities.

OPPAGA has also identified a host of other programs that deserve to be replicated and expanded. DJJ’s Sourcebook for Delinquency Interventions details even more programs and practices that are cheaper and more effective than institutions. In general, these programs contain elements of Multi- Systemic Therapy, Functional Family Therapy, Life Skills Training, Aggression Replacement Training, and cognitive behavior curricula. They have all proved to be more effective and more efficient than residential facilities. 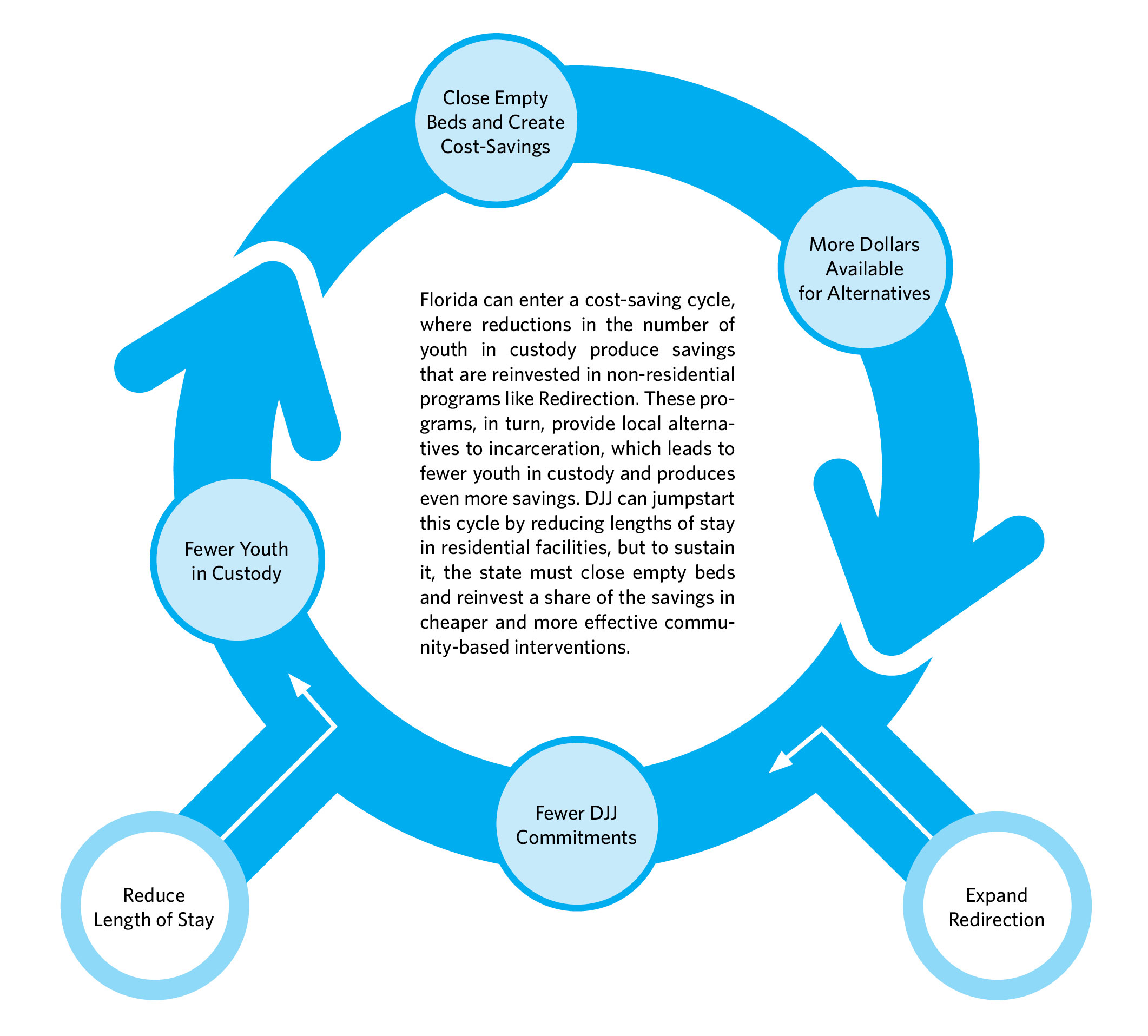 The DJJ’s over reliance on incarceration has compromised public safety and hurt Florida’s finances. Community-based approaches to juvenile delinquency are more effective, more efficient, and ready to be expanded. By shifting resources from expensive residential facilities to more efficient and effective community-based sanctions, the state can enhance public safety, save money, and achieve better results for Florida’s youth.