From his base in Brussels, a Belgian webmaster is running some of Europe's leading hate sites. He also may be breaking the law 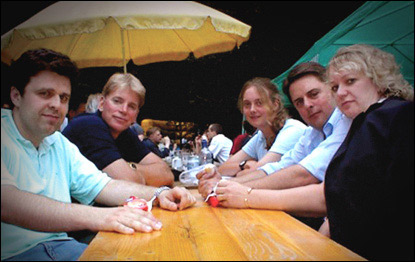 On a beautiful day in northern Germany in the summer of 2002, two notorious white supremacists sat down at a picnic table to eat vanilla ice cream.

There's no record of the conversation that accompanied the ice cream. But it's a good bet that website technology came up. D'Aubignosc at the time was a longtime computer expert and professional website designer, as well as a self-proclaimed white nationalist.

Since he met with Duke and Griffin in 2002, d'Aubignosc ("dee-ah-ben-yosc") has become a major behind-the-scenes promoter of white nationalist ideology in more than a dozen countries, an Intelligence Report investigation has revealed.

According to international website registry records and d'Aubignosc's own statements on the white supremacist online forum Stormfront, he is the chief website manager, or "webmaster," for several high-profile white nationalist organizations, including the British National Party; the French white nationalist group Le Mouvement Social et Patriotique; and the National Front, a far-right anti-immigrant political party in France. The National Front's leader, Jean-Marie Le Pen, personally tasked d'Aubignosc with creating a pan-European white nationalist web presence at a meeting last year in Paris, according to a statement d'Aubignosc posted online under his code name, Indutiomar, which is apparently a reference to the first century Celtic general Indutiomarus.

D'Aubignosc also administers a multinational "whites only" dating service called Eurodatelink and a network of white nationalist electronic newsletters for readers in 16 European countries, as well as the United States and Canada. D'Aubignosc promotes this network, dubbed Altermedia, as "World Wide News for People of European Descent."

But d'Aubignosc's most vital role in the global white nationalist movement is that of David Duke's personal webmaster. D'Aubignosc designs, manages, and regularly updates Duke's official website and that of the Duke-led hate group, EURO (European American Unity and Rights Organization).

Also, Evans is the North American contact for Upsylon, a web hosting and E-commerce consulting firm owned by d'Aubignosc. Upsylon is based in Brussels, Belgium, where d'Aubignosc also maintains a residence.

Because he lives and works in Belgium, d'Aubignosc's white nationalist website management may violate that country's strict anti-hate speech laws, which prohibit residents of Belgium from distributing propaganda that "incites discrimination, hatred, segregation or violence" against a person or group "on account of race, color, origin, or national or ethnic descent."

The fact that d'Aubignosc is distributing racist and anti-Semitic materials online rather than passing out leaflets in the street affords him scant legal protection, according to Frederick Banson, spokesperson for the European Union Agency for Fundamental Rights, a European Union agency that monitors racism and xenophobia and advises EU member nations on prosecuting hate crimes. 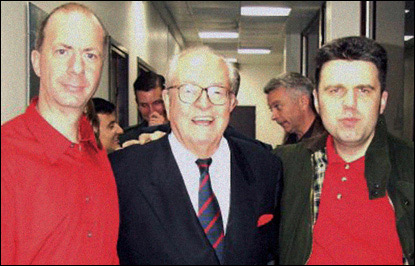 "Last June, two webmasters of the [Islamist] web site 'Assabyle.com' in Belgium were sentenced to ten months imprisonment and a fine of 15,000 Euros [about $19,000] for acts of anti-Semitism, Holocaust denial, and incitement to racial hate," said Banson. "Also in June 2006, the leaders of the French-speaking extreme right-wing party 'Mouvement de la Nation' were sentenced to six months for distributing materials online containing incitements to racial discrimination, so there already exists strong case precedent for successful prosecutions [of racist and anti-Semitic web masters]."

Banson would not reveal whether his agency is aware of d'Aubignosc's white nationalist activism, or whether an investigation of d'Aubignosc is underway. "I am not at liberty to discuss or provide any data we may or may not have concerning a third party," he said.

D'Aubignosc did not reply to five E-mails or three voicemail messages left over a two-week period in late February and early March, seeking comment for this story.

Compared to limelight-seekers like Duke, Griffin and Le Pen, d'Aubignsoc remains an obscure figure in the white nationalist movement. His online postings reveal little about his personal background. According to a letter d'Aubignosc sent to Canadian Prime Minister Paul Martin in March 2004 protesting the detention of Holocaust denier Ernst Zundel, d'Aubignosc's mother married the Canadian ambassador to Belgium when d'Aubignosc was 7 years old. "Canada soon became like a second fatherland to me," he wrote.

In October 2003, d'Aubignosc posted to Stormfront, "I have been working hard to unite all people from European descent wherever they may live." In May 2004, he published a report on Altermedia about David Duke's homecoming party after Duke was released from federal prison after serving a year for ripping off supporters. In that post, d'Aubignosc wrote that he had first met Duke in Europe in January 2000 and then visited Duke in Louisiana in May 2000. D'Aubignosc then launched into an anti-Semitic screed.

While legal in the United States, publishing such vitriol could get a man into big trouble in Belgium, or any other EU country with harsh anti-hate speech laws.

As d'Aubignosc wrote in November 2006 in an article for Altermedia celebrating British National Party leader Griffin's acquittal on hate speech charges, "In Europe, we do not have free speech, and we have to be very careful about what we say and about the words we use."

If the recent cases in his home country are any indication, the Belgian webmaster better hope he's been careful enough.

Heidi Beirich and Laurie Wood contributed to this report.