At least we can cross one item off our national list of worries: Exhaustive research by an international team of researchers has proved conclusively that our president is not the Antichrist.

Between massive unemployment, political gridlock, and intractable foreign wars, America is in a bit of a tough spot these days. But at least we can cross one item off our national list of worries: Exhaustive research by an international team of researchers has proved conclusively that our president is not the Antichrist.

Now, don’t get too relaxed. While President Obama is not consciously evil, he is an “apostle” of the New World Order and “one of the most dangerous US presidents ever to hold office” — or so says Mel Sanger, principal author of “The Antichrist Identity.”

The Intelligence Report was alerted to Sanger’s revelatory findings by the hardworking team at WorldNetDaily (WND), which recently sent an “Urgent” E-mail to subscribers interested in “Carefully Selected Offers from Third Parties.” 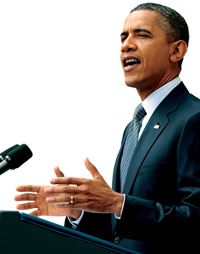 “On 3 separate occassions [sic] this dossier was banned from being available on the internet but luckily the freedom of information act has ensured its survival…. for now,” says WND’s E-mail. “Act now whilst it is still available.” (Actually, the report has been floating around the Internet since at least 2009 — par for the course when it comes to WND, whose publishing arm, WND Books, released Jerome Corsi’s long-awaited “birther” manifesto, Where’s the Birth Certificate? after the publication of that document was old news.)

Sanger’s report is a cumbersome blend of Christian eschatology and modern antigovernment conspiracy theories whose fundamental thesis is that Freemasons and “apostate” Jews (as opposed to “Bible-believing” ones) are behind an ancient plot to depopulate the planet, enslave the human race, and bring about a One World Government headed by European royalty. Aided by the pliant mainstream media, it says, our Manchurian president has already made considerable progress toward the “New World Order” goal of reshaping America into a society of gunless, government-dependent, secular humanists.

Proof of that is in the pudding that “Obamacare” will soon forbid us to eat. Though it purports to be about public welfare, the president’s health care bill is really part of a sinister agenda that will eviscerate the Constitution, erode privacy, and ultimately allow the government to control us completely. “What is to keep the administration from defining gun ownership as a contributory health factor and, while they can’t circumvent the Second Amendment, they could raise healthcare premiums to the point where gun ownership and use becomes less desirable,” the report says breathlessly.

That’s not even the worst of it. Obama probably isn’t Muslim, Sanger contends, but the president is and always has been a crypto-communist — and his church affiliation proves it. Under pastor Jeremiah Wright (whose teachings the president has publicly condemned), Chicago’s Trinity United Church of Christ, which Obama attended for years, teaches a brand of “Black liberation theology” dedicated to “a Marxist ideological, collective, class-struggle, and ultimately tyrannical construct committed to destroying individual freedom.”

The president isn’t the only New World Order apostle on the loose. He shares this distinction with Spanish diplomat Javier Solana and Prince Charles (who Sanger fingers as a crypto-Muslim with the bloodlines to father a potential Antichrist), among others. And behind the scenes, innumerable puppet masters are pulling the strings. Sanger identifies dozens, including the Rothschilds, the United Nations, the Weather Underground, the CIA, the KGB, the Mafia, the Federal Reserve, and the Gallup Poll, whose various roles are helpfully illuminated in a hand-drawn flowchart decorated with circles, arrows, and different thicknesses of pen.

Together, these agents are setting up the planet for takeover by “Jewish Masonic” elites who will reduce the world’s population by 5.5 billion and establish “dictatorial Illuministic Communism” in order “to enslave all of mankind under the thumb of a Jewish master race led by a world messiah of Jewish ancestry who is to rule from Jerusalem.”

“This is not an anti-semetic [sic] stance,” the report hastens to add, “but rather one that differentiates between Godly Jews from the line of Abraham and those Jews whose apostasy has caused them to be an integral part of a major demonic plan.”

If this sounds implausible, don’t worry. You’ve just been brainwashed like the rest of us. “The good news,” the report concludes, “is that you are well informed because of your ongoing search for truth and so will be able to better discern the events that are impacting us with greater frequency.”