In the months leading up to his trial on federal tax crimes, James Timothy Turner, the head of the largest antigovernment “sovereign citizens” group in the country, boasted that he knew “truths” about the federal government and history that would set him free.

An old hand on the sovereign circuit, he played the part of a political prisoner by claiming the federal government was trying to silence him, adding that it was only a matter of time before his organization, the Republic for the united States of America (RuSA), took control of the government, which he said was up to no good. “I discovered things that big Washington government doesn’t want you to know,” he proclaimed on the opening day of his trial in U.S. District Court in Montgomery, Ala.

But none of that was true.

The secrets Turner purported to have uncovered were little more than half-baked fantasies and an addled understanding of the law — ideas that both fueled his meteoric rise on the antigovernment right and ultimately resulted in his fall.

On March 22, it took a jury less than an hour to return a guilty verdict on the 10 tax fraud charges Turner faced, including the allegation that he had used a fictitious financial instrument with a face value of $300 million to pay his taxes. He apparently expected to receive a whopping government refund.

Much of Turner’s trial, in fact, focused on those very “bonds” he taught people how to make in seminars across the country between 2007 and 2010. In sessions for which he charged as little as $50 for a few minutes of his time to more than $300 for a two-day seminar, Turner claimed to expose the secrets of the American banking and legal systems. Using what he called “Freedom Documents,” he claimed to have devised a system that could free anyone of mortgage, tax or credit card debt. 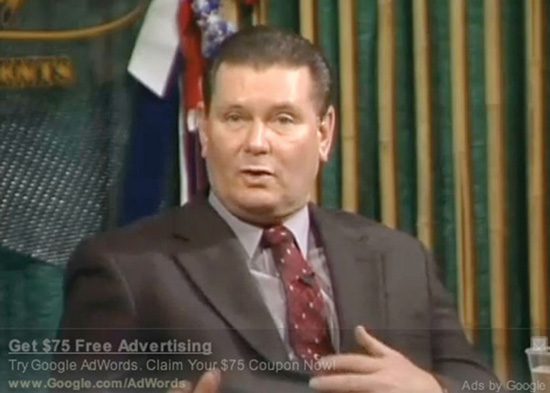 In reality, of course, Turner was teaching his clients how to dupe bankers and court officers, federal prosecutors said.

Turner and other sovereign citizens typically spent Saturday mornings around a color printer making dozens of the fraudulent bank bonds, according to testimony in the case. The bonds were to be peddled to those in desperate financial situations.

“They’re designed to look real enough to make the government accept them,” federal prosecutor Justin Gelfand said. “[But] they’re, in fact, worth nothing more than Monopoly money.”

Such financial schemes were only a beginning for Turner, who in the last three years built RuSA from a base of sovereign citizens in South Alabama into a nationwide government-in-waiting, with supporters in nearly every state. A few of those supporters were in the courtroom when Turner, 57, of Ozark, Ala., gave a half-hearted wave as U.S. marshals took him away after the guilty verdict was read. One was Vivian Gwin, a RuSA “senator” from North Dakota, who shook her head in disbelief. “This is not about his bonds being unlawful,” she said defiantly. Then, parroting what Turner had said all along, she added, “This is about him being the president of the Republic.”