It seems that as Americans become more accepting of same-sex marriage and LGBT people in general, many anti-gay groups grow more desperate in their attempts to smear gay men and lesbians with rhetoric linking them to all kinds of societal ills.

But none of that stopped the Rhode Island chapter of the National Organization for Marriage (NOM) from posting videos on its website last January that not only referred to homosexuality as being “lethal” and a “disorder” but accused LGBT people of “collapsing morality” and pushing “atheistic Communism.” Until recently, NOM typically steered clear of the kind of malicious rhetoric employed by some of the more extreme anti-gay groups. After progressive bloggers took note, the videos rapidly disappeared from the anti-gay group’s site.

Scott Lively of Abiding Truth Ministries, best known for his activism in Uganda on behalf of the “kill the gays” legislation, continued to push the theory that President Obama is gay. His proof? The president traveled in February with his former personal assistant, Reggie Love, rather than the first lady while returning from a vacation. Last year, Lively claimed that Obama had once been married to a man. 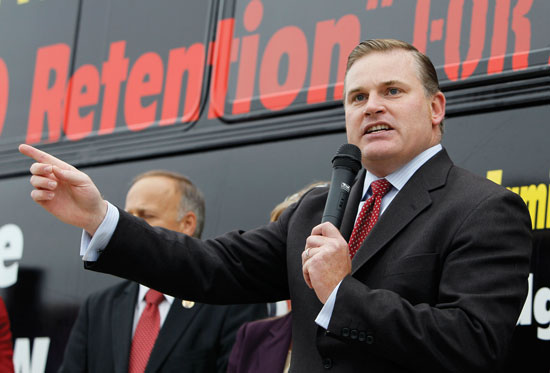 Brian Brown, president of the anti-same-sex marriage group National Organization for Marriage, has tried to give his group a moderate image. That didn’t stop a NOM chapter last January from accusing LGBT people of “collapsing morality” and “pushing atheistic communism” — at least until the slurs were noticed by pro-LGBT bloggers.
CHARLIE NEIBERGALL/AP IMAGES

In keeping with Lively’s theme, the American Family Association’s Sandy Rios tried in March to resurrect the rumor that Hillary Clinton is a lesbian after the former secretary of state announced her support for marriage equality. Not to be outdone, Americans for Truth About Homosexuality launched a “pedo-file” project devoted to smearing gay men as pedophiles. (All major medical and psychological associations have concluded that gay men are no more likely than straight men to molest children.) Keeping up the pedophilia drumbeat at the National Press Club in April, perennial junk science purveyor and thoroughly discredited psychologist Paul Cameron claimed that one in four gay men have sex with children “as part of their sexual repertoire.” If that weren’t bad enough, Cameron added some bestiality to his slander stew. He claimed that references to pets in the obituaries of gay people indicate “estrangement from humanity” — adding that 20% of gay men have sex with animals.

Is it any wonder that LGBT people are, by far, the group most victimized by violent hate crime?