If misery loves company, so does wacky, at least when it comes to America’s elected officials and some of the laws they think up and sometimes even pass. Take the City Council of little Nelson, Ga., home to 1,300 souls about 50 miles north of Atlanta.

On April 1 — that’s right, April Fools’ Day — the five-member City Council, according to The Associated Press, voted unanimously to approve a measure requiring every head of household in town to own a gun and ammunition to “provide for the emergency management of the city” and to “provide for and protect the safety, security and general welfare of the city and its inhabitants.”

The measure was called the Family Protection Ordinance and exempted convicted felons, residents suffering from physical and mental disabilities and anyone who just plain didn’t want to own a gun. There was no penalty for not complying.

Essentially, the measure was tiny Nelson’s two cents in the national debate about gun control, following the Newtown, Conn., elementary school massacre. Indeed, the AP quoted from the council’s agenda, which said another purpose of the measure is “opposition of any future attempt by the federal government to confiscate personal firearms.”

The big bad federal government was also on the minds of a group of North Carolina Republican state legislators who proposed in early April a bill allowing an official state religion and declaring North Carolina exempt from the Constitution and court rulings. 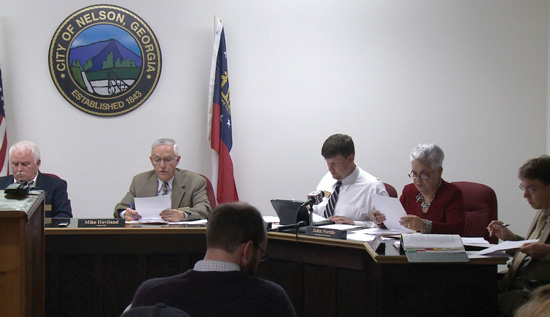 The elder statesmen and stateswoman of tiny Nelson, Ga., passed a law requiring almost every head of household to own a gun and ammunition. The measure, signaling resistance to any federal attempt to “confiscate personal firearms,” was approved on April Fools’ Day.
JOHNNY CLARK/AP IMAGES

The bill said each state “is sovereign” and courts cannot block a state from “making laws respecting an establishment of religion.” It also said the First Amendment only applies to the federal government and does not stop state governments, local governments and school districts from adopting measures that defy the Constitution.

North Carolina Speaker of the House Thom Tillis quickly stepped in and killed the measure, saving the state, as one Internet wag put it, “from further embarrassment.”

In March, Kentucky Gov. Steve Beshear tried to save his state from further embarrassment by vetoing a controversial “religious freedom” bill, which opponents said could pave the way for increased discrimination against LGBT people, wrote blogger Camille Beredjick.

The bill, sponsored by a conservative Democrat, would allow residents to sidestep anti-discrimination laws if they pointed to “sincerely” held “religious beliefs” that justify their actions, according to opponents of the measure.

Gay rights groups and other advocates were up in arms.

“House Bill 279 represents a clear and present danger to the gay and lesbian community and other minority groups around the commonwealth,” the Lexington Herald-Leader quoted a letter from the Kentucky Equality Federation sent to the senator who sponsored the bill. It “does nothing more,” the letter continued, “than give people permission to discriminate based on their religious beliefs, thereby taking it beyond ‘freedom of religion’ to ‘forced religion,’ because they have imposed their religious beliefs on others, with legal authority to do so.”

“I have significant concerns,” the Louisville Courier-Journal quoted him as saying, “that this bill will cause serious unintentional consequences that could threaten public safety, health care, and individuals’ civil rights.”

On March 26, the Kentucky House and Senate overwhelmingly voted to override Gov. Steve Beshear’s veto. The bill will become law in July.