So fearful was Phillip Monroe Ballard that U.S. District Judge John McBryde would sentence him to prison for filing false federal income tax returns that the self-described “sovereign citizen” decided the judge needed to die.

In jail, the 72-year-old antigovernment extremist came up with a plan, drew a map, and arranged for a $5,000 down payment on the $100,000 he offered to pay an assassin to shoot McBryde with a high-powered rifle as he entered the courthouse in Fort Worth, Texas. If that plan failed, Ballard wanted McBryde’s car bombed, court documents allege. 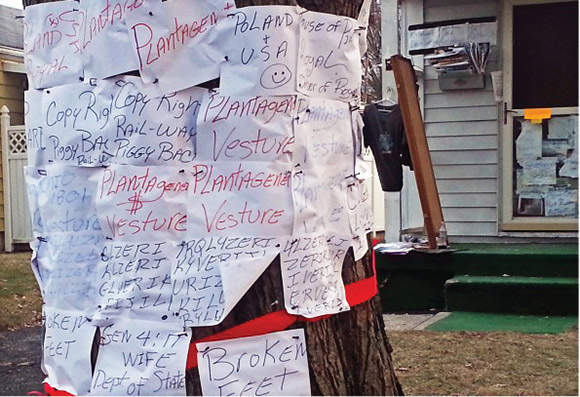 Ohio authorities serving eviction papers on Mark Kulis found his house booby-trapped with explosive devices and adorned with often senseless scriblings. The local sheriff said Kulis was an antigovernment “sovereign citizen,” but he may have been simply mentally ill. HATEWATCH PHOTO

Fortunately, one of Ballard’s fellow inmates told prison officials about the scheme, saying that Ballard, like other so-called sovereign citizens, described himself as “immune from all laws of the United States.” In December, a Fort Worth federal jury convicted Ballard of solicitation to commit murder, and on March 17, a visiting judge from Louisiana sentenced him to 20 years in prison — ironically, the same amount of time Ballard reportedly feared he’d receive on the original tax charges.

Ballard was hardly the only apparent sovereign citizen willing to resort to violence. On Jan. 15, sheriff’s deputies in Franklin County, Ohio, received a nasty surprise when they tried to deliver eviction papers to the home of Mark Kulis. Having been warned that Kulis, 55, could be dangerous, the deputies picked a time when he was known to be out of the house. On arrival, they found the oven and bedroom booby-trapped with explosive devices. Sheriff Zach Scott told the Intelligence Report that Kulis was a sovereign citizen, but the evidence on that was mixed and he may have been simply mentally ill.

A bomb squad safely disposed of the explosive devices, and Kulis, who was carrying a handgun when police arrested him near his home, was taken to jail. The Columbus Dispatch reported that he was charged with two felonies: carrying a concealed weapon and manufacturing dangerous ordnance.

Meanwhile, on Feb. 7, three men connected to the Republic for the united States of America, the largest and most organized sovereign group active today, were found guilty of mail fraud. James Chappell Dew, 59, of North Myrtle Beach, S.C., Jerry Elmo Hartsoe, 57, of West Columbia, S.C., and Mark Shannon, 49, of Franklin, Tenn., each face up to 30 years in prison and fines of $250,000 for telling victims they had access to secret government accounts and would, for a fee, pay off mortgages, credit cards and other types of debt.

Instead, they pocketed the money and sent banks fancily worded but ultimately meaningless documents “designed,” according to an FBI affidavit, “to confuse, delay or otherwise obstruct the lawful role of the IRS, the United States Bankruptcy Trustee and the banks.” Many of the men’s “clients” lost their homes to foreclosure.