After almost a quarter century of vicious anti-gay activism, Fred Phelps is dead. The irony is his life may have done more for LGBT equality than almost anyone’s.

Fred Phelps, America’s most rabid gay-basher and a man who drew almost universal contempt from the far left to the far right, died on March 19 amid a welter of reports that he earlier had been excommunicated from the church he founded.

Phelps and his extended family, who made up the bulk of the congregation of Westboro Baptist Church in Topeka, Kan., spent almost a quarter of a century issuing vulgar and incredibly spiteful rhetoric against LGBT people and their supporters. The group of fewer than 70 people was especially loathed for picketing the funerals of American soldiers who died abroad, carrying signs like “Thank God for Dead Soldiers” and saying God was punishing a “fag-enabling” nation.

Phelps and his followers attacked school children killed in bus crashes, victims of crazed killers, Nobel Peace Prize laureates, schools, synagogues, and a whole host of others accused of supporting homosexuality, typically in the most tangential of ways. When Al Qaeda attacked the United States in 2001, Phelps’ response was to savage the murdered pilot of one of the downed airliners as “the filthy face of fag evil,” among other things. In recent years, he also attacked Jews, picketing synagogues and saying Jews’ “vermin ancestors” had killed Christ. 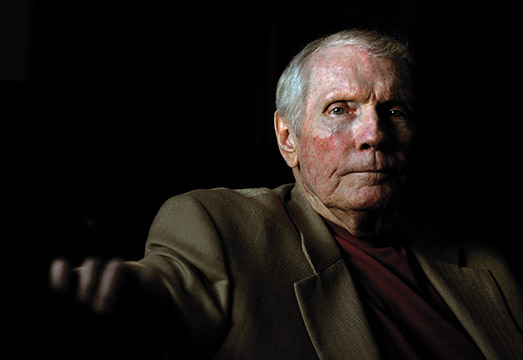 Phelps’ death at age 84 came amid reports, based on statements from one of his estranged sons, that he had been excommunicated last fall from the church he founded in 1955. The reports claimed that others in the church had formed an all-male board of elders, dethroned longtime spokeswoman and heir apparent Shirley Phelps-Roper, and tossed Phelps out of his own church because he said that he thought congregants should be kinder to one another. If true, it was an exceedingly ironic end for a vitriolic man who was not known for kindness of any sort.

Phelps’ crusade against gay people began in earnest in 1991, when he and his followers began picketing a Topeka park supposedly known as a meeting place for gay men. It rapidly picked up steam over the following years, with Phelps claiming to picket more than 40 places a week and his starting of a website called “God Hates Fags.” In 1998, Phelps came to widespread national attention when he picketed the funeral of Matthew Shepard, a gay man murdered in a notorious attack in Wyoming. Around 2005, he began picketing the funerals of soldiers killed in Afghanistan and Iraq, leading to global infamy. A British documentary even labeled Phelps and his offspring, with considerable justification, “the most hated family in America.” 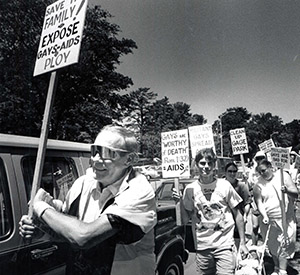 The onslaught begins: Fred Phelps’ Westboro Baptist Church began its anti-gay crusade with pickets in 1991 at Gage Park in Topeka, Kan. Soon, the church was claiming that it carried out 40 pickets every week. GETTY IMAGES/TIM BOYLE

“I’m so sick of people calling him an ‘anti-gay activist,’” one Topeka resident who had numerous conflicts with Phelps over the years told the Intelligence Report in 2001. “He’s not an anti-gay activist. He’s a human abuse machine.”

But Phelps never seemed to waver in his view of God as a cruel ruler animated by hatred. “You can’t believe the Bible without believing that God hates people,” he told the Houston Chronicle in 1998. “It’s pure nonsense to say that God loves the sinner but hates the sin. He hates the sin, and he hates the sinner.”

Phelps was a man obsessed by sex and human sexuality for at least six decades. In 1951, Time magazine profiled Phelps’ California street ministry against dirty jokes and sexual petting. Later, Phelps became the man who seemed to think more about the graphic details of gay sex than any other American, an observation that caused many to wonder just what was really going on inside his head.

Phelps’ estranged children — four of his 13 offspring broke with him and have had nothing to do with him or the church in subsequent years — described a harrowing childhood, saying that he beat some of them with a mattock handle, forced them to sell candy in the streets to raise money, and made them do extended daily runs. At least one said that Phelps, who at one point claimed to be a civil rights attorney, represented several black litigants, and even received an NAACP award, commonly used the word “nigger” and other slurs when they were young. 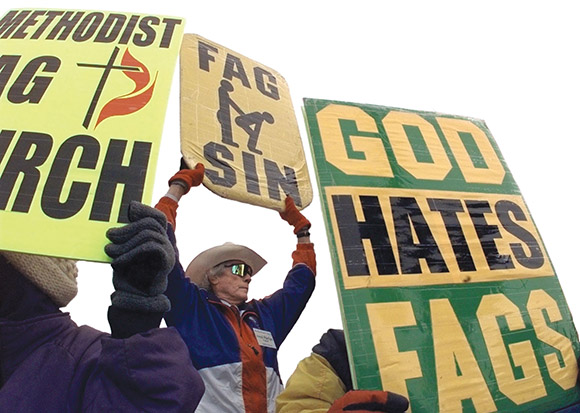 Over the years, police in Topeka took reports from people who said they were battered, harassed, stalked and spat on by Westboro congregants. One mainstream preacher said a Phelps follower accused him of “drink[ing] blood at the altar of the sphincter.” But many of Phelps’ children were also lawyers, and they managed to fight off most of these criminal complaints. They also won many First Amendment cases brought against communities that sought to prevent his harangues. Those cases and the children’s unrelated legal work brought in most of Westboro’s income.

The church won a major victory in 2011, when the Supreme Court ruled that Phelps’ funeral protests, as ugly as they were, were protected free speech under the First Amendment. The high court affirmed an appeals court decision striking down a $5 million verdict awarded to the father of soldier whose funeral was picketed by Westboro. “As a nation, we have chosen … to protect even hurtful speech on public issues to ensure we do not stifle public debate,” Chief Justice John Roberts wrote. 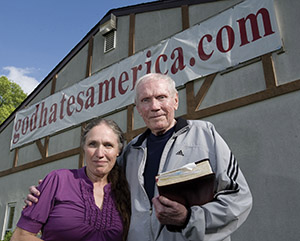 For years, Shirley Phelps-Roper was the main voice of Westboro Baptist Church and the heir apparent of her father. But shortly before Fred Phelps’ death, his daughter was reportedly dethroned in favor of a male spokesman. AP IMAGES/REX FEATURES

As Phelps neared his end, the leaders of Westboro fudged the truth, telling reporters that he “had a couple of things going on” with his health, but was not in danger of dying, despite the fact that he was already in a hospice. “The source that says he is near death is not well informed,” spokesman Steve Drain claimed.

As the news of Phelps’ death spread, a variety of LGBT groups and their supporters shunned the idea of disrupting any funeral for the man who had done them such harm over the decades, often at funerals of their friends. Despite the church’s record, they seemed to agree that it was only right to allow Phelps’ family to bury their patriarch in peace. The family, however, apparently didn’t trust that, deciding instead to allow the death of Phelps to go unmarked by any funeral.