The police department of Suffolk County, N.Y., has reached an agreement with the U.S. Department of Justice (DOJ) to enhance the training of its officers and improve the way it investigates hate crimes and bias incidents.

Suffolk officials unanimously approved a 27-page settlement between local police and federal officials in December that addresses longstanding concerns of official discrimination. The settlement resolved a federal investigation into the county’s policing practices that was prompted by revelations of rampant anti-Latino hate violence in the county.

The most infamous of those crimes came in 2008, when Ecuadorian immigrant Marcelo Lucero was fatally stabbed in Patchogue. Lucero was killed by a group of mostly white teens engaging in what they called “b------jumping.”

The following year, the Southern Poverty Law Center (SPLC) issued a report, Climate of Fear: Latino Immigrants in Suffolk County, N.Y., that documented widespread hatred and violence directed at Latino immigrants in the Long Island county. The report described how Latino immigrants in Suffolk County were regularly harassed, shot with BB guns or pepper-sprayed, run off the road while riding bicycles, and targeted for random beatings. The SPLC report called for major changes in the police department’s relationship with its rapidly growing immigrant population — in particular, pointing to the need for training law enforcement officials to adequately address hate-motivated crime. In 2011, the SPLC also lobbied the DOJ directly to investigate the county’s activities. 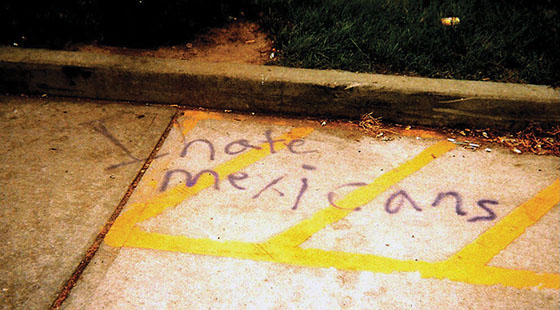 In summarizing the agreement, Police Commissioner Edward Webber highlighted changes to the department’s Community Oriented Police Enforcement unit. Officers with those duties at each precinct now split time between traditional community policing and other assignments, such as coordinating traffic during large events. “Many of the recommendations that we’ve agreed to, we’ve already voluntarily instituted, and have been doing them for some time now,” he said.

While the settlement agreement did not assess ongoing discrimination, it does appear, at least for the time being, that conditions have improved.

Latino residents interviewed by The Associated Press for a story around the fifth anniversary of Lucero’s murder in November said they had noticed significant improvement in how they are treated, both by police and their neighbors.

“Now, the people report to the police, with or without documents,” Cecilia Bonilla, an immigrant from El Salvador, said. “A lot has changed. I still hear that people are beaten, but not as much as before. Before it was worse.”