An American convert to radical Islam pleaded guilty on Feb. 19 to terrorism charges in connection with his plot to blow up various targets in New York City, including the George Washington Bridge. José Pimental, 29, will serve 16 years in prison for attempted criminal possession of a weapon as a crime of terrorism.

Pimental, who was under police surveillance for more than two years, had nearly completed three bombs when he was arrested in November 2011. During a news conference held shortly after the arrest, former New York City Police Commissioner Ray Kelly said Pimental “talked about killing U.S. military personnel returning home from Iraq and Afghanistan,” as well as bombing post offices, police cars, and larger targets to let “the public know there were mujahedeen in the city to fight jihad here.” 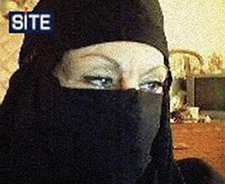 Earlier, on Jan. 6, a Pennsylvania federal judge sentenced another American convert to Islam to 10 years in prison. Colleen LaRose — or “Jihad Jane,” as she styled herself online — pleaded guilty in 2011 to plotting the murder of a cartoonist who drew the Prophet Muhammad as a dog. LaRose, who used online forums to recruit allies and solicit financial support for international jihadist activities, reportedly relished the ease with which her blonde hair and blue eyes allowed her to “blend in with many people,” as she conspired unsuccessfully to assassinate Swedish cartoonist Lars Vilks, whose 2007 drawings depicting the Prophet Muhammad as a dog inspired more than one violent attack.

When she wasn’t trolling jihadist message boards for potential recruits, LaRose found time to post Web comments describing Jews as “cancer to the world as a whole” and wishing “Hitler would have finished the job.” She was indicted in March 2010 and is said to have cooperated with the government.

One of her co-defendants, Mohammad Hassan Khalid, a Pakistani citizen and legal permanent U.S. resident, pleaded guilty in 2012 to providing material support to terrorists. Because he cooperated substantially with the government’s investigator, prosecutors intend to ask that he spend less than 10 years in prison when he is sentenced this spring. A second co-defendant, Colorado native Jamie Paulin-Ramirez, was sentenced to eight years in prison in January.