This year’s Sept. 11 commemorations were sometimes downright ugly due to escalating anti-Muslim acrimony.

The annual observances in New York City of the Sept. 11, 2001, terror attacks on the World Trade Center are normally somber and subdued. But with anti-Muslim acrimony in America escalating, apparently stoked by anger over a proposed Islamic cultural center two blocks from Ground Zero, this year’s commemorations were sometimes downright ugly.

Public figures such as Newt Gingrich and Sarah Palin helped fuel that discord with harsh denunciations of the proposed Muslim center. But no one did more to fan the flames of fear and hatred over the “Ground Zero mosque” than Pamela Geller, co-founder of Stop Islamization of America (SIOA).

Earlier this year, Geller — who also has questioned whether President Obama was born in America — bought anti-Muslim ads that were displayed on New York City buses for a month. She warned that Muslims will “turn to further intimidation, murder and terrorism” if they can’t achieve a political takeover. Her comments were so incendiary, in fact, that several neo-Nazi organizations even ignored the fact that she is Jewish and published her diatribes. She in turn commented favorably on the South African, apartheid-defending terrorist Eugene Terre’Blanche after he was murdered, blaming his death on “black supremacism.” 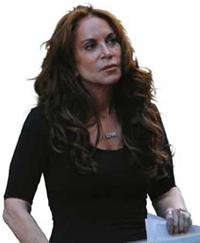 On Sept. 11, Geller led a rally near the proposed Muslim community center, where protesters carried signs (“No mosque on sacred ground”) and heard speeches by her and Geert Wilders. Wilders is a hard-line Dutch lawmaker who has compared the Koran to Hitler’sMein Kampf and made frequent speeches in the United States warning that Islam is an ideology, not a religion, intent on world domination.

At the same time Geller’s demonstration was being staged, a rival rally was held just blocks away. Those demonstrators called for tolerance and carried their own signs — “The attack on Islam is racism” was one.

Citing police estimates, The Wall Street Journal said there were about 1,500 people at Geller’s anti-mosque rally and 2,000 at the counter-demonstration. The New York Postsaid the pro-mosque crowd outnumbered the anti-mosque protesters, 3,000 to 2,500. Both these estimates infuriated Geller, who accused the “liberal establishment mass media” of a “massive distortion” meant to minimize her cause. 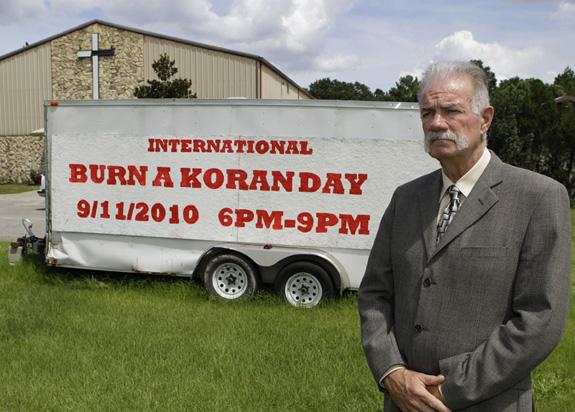 For several days this September, Gainesville, Fla., pastor Terry Jones and his plans to burn Korans were world news. Then the Muslim- and gay-bashing chief of the Dove World Outreach Center sank back into obscurity.

Meanwhile, an obscure pastor from Gainesville, Fla., drew vastly more publicity than the far better known Geller by announcing a plan to mark the 9/11 commemoration with “International Burn a Koran Day.” News of Terry Jones’ plans tore across the Muslim world, igniting fury in Afghanistan and elsewhere.

Secretary of Defense Robert Gates phoned Jones in an effort to persuade him not to burn copies of the Islamic religious text. Gen. David Petraeus, the top U.S. commander in Afghanistan, warned that Jones could endanger the troops. President Obama said if Jones followed through on his plan, it would be “a recruitment bonanza for al Qaeda.” The right-wing pastor, who has also bitterly attacked “homos,” received death threats and a visit from FBI agents. The international police agency Interpol issued a warning to governments worldwide of an increased risk of terror attacks if Jones proceeded with his plan. The U.S. State Department also warned Americans living and traveling abroad of the potential for violent protests.

In the end, Jones canceled his Koran burning event, saying he had an agreement that would move the Manhattan Islamic center to another site. That wasn’t so. Gainesville law enforcement agencies later said they would bill Jones for the costs associated with his planned Koran burning. They are expected to exceed $200,000. That would bankrupt his 50-member Dove World Outreach Center, Jones said, a prospect that clearly delighted many residents of Gainesville.