A hate group with international reach and a talent for couching its anti-LGBT agenda in respectful-sounding terms convened in Salt Lake City during the last week of October, bringing together a raft of right-wing heavy-hitters to talk about “[t]he value of life in all its stages and conditions.”

This was the first time that the World Congress of Families (WCF), a Rockford, Ill.-based organization that’s been instrumental in promoting anti-LGBT laws in Nigeria, Russia, Uganda and elsewhere, has held its annual gathering in the United States. Typically, the group meets abroad, in countries more open to its aggressive anti-LGBT agenda. (The 2014 conference, for instance, was set to take place in Russia, the site of a recent WCF victory in the form of a law banning LGBT “propaganda.” But those plans were suspended in the aftermath of Russia’s annexation of Crimea from neighboring Ukraine.) 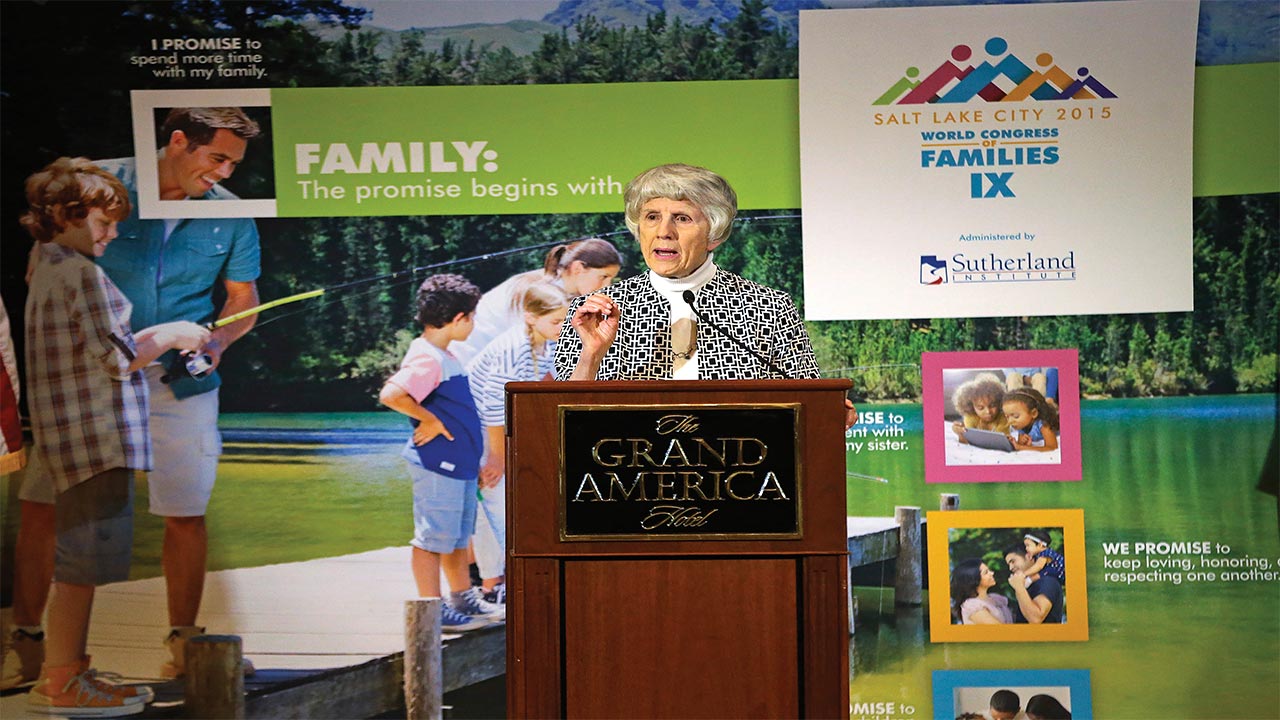 Pamela Atkinson, an adviser to Utah Gov. Gary Herbert, defends the governor’s support of the World Congress of Families, which has been deemed a hate group.

Speakers at the Salt Lake City event included Mark Regnerus, author of a discredited but widely cited study claiming that same-sex couples make bad parents; Brian Brown, head of the anti-LGBT National Organization for Marriage; Austin Ruse, president of the Center for Family and Human Rights (C-FAM), an anti-LGBT hate group, who in 2014 said that “hard left, human-hating people that run modern universities … should all be taken out and shot”; Peter Sprigg of the Family Research Council, an influential hate group that specializes in peddling lies about the supposed risks LGBT people pose to society; and Rafael Cruz, a gay-bashing public figure best known as father of ultra-right-wing Texas senator and presidential candidate Ted Cruz.

A clutch of influential right-wing organizations, including several anti-LGBT groups such as the Alliance Defending Freedom, the Family Research Council and the National Organization for Marriage, partnered with WCF to stage the meeting.

WCF bills itself as pro-family, but proffers a narrow definition of “natural family” as “the voluntary union of a man and a woman in a lifelong covenant of marriage” — excluding and marginalizing single parents, grandparents, nonbiological guardians, and, especially, same-sex couples. Its leadership is particularly exercised about the legalization of same-sex marriage, which it sees as a Trojan Horse for plans to criminalize Christianity.

While increasingly unpopular in America, that notion has gained particular traction in parts of Africa, where laws criminalizing homosexuality have recently made a comeback. Indeed, Peter Montgomery of Right Wing Watch characterized WCF as a “love-fest between African activists and their American allies.” Theresa Okafor, recipient of WCF’s 2015 “Woman of the Year” award, is a Nigerian native who, in addition to promoting harsh anti-LGBT laws in the region, has suggested that pro-equality activists are in league with the jihadist terrorists of Boko Haram.

Rhetoric at the four-day event hewed, for the most part, to WCF’s tradition of keeping its tone civil and its message extreme. A notable departure came the last day of the gathering, when Everett Piper, president of Oklahoma Wesleyan University, declared that the “wise and learned in our courts, and in our classrooms, and, unfortunately, even in our churches, actually work to remove a man’s soul and expect him to stay out of hell.”