The Washington Times, which has a long history of shoddy journalism and extremism, has recently endured a spate of staff departures, including that of Washington insider Tony Blankley. Blankley, the newspaper’s editorial page editor and former press secretary for then-House Speaker Newt Gingrich (R-Ga.), joined the PR firm Edelman on Sept. 18 as its executive vice president for global public affairs. Following him out the Times’ door in October will be Cathy Gainor, the business news editor. Earlier this year, two of the Times’ top advertising salesmen, Michael McGrath and Aaron Finely, bolted as well. 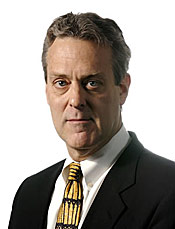 These resignations come after an onslaught of press accounts revealing white supremacist thinking by Managing Editor Francis Coombs (pictured right, see Coombs' blog here), whose wife Marian has direct ties to white supremacists (as revealed in 2005 by the Intelligence Report). One of Coombs’ favored editors, Robert Stacy McCain, is an ardent foe of interracial marriage and a former member of the white supremacist League of the South. Most damaging to Coombs have been recent revelations of the Coombses’ alleged associations with neo-Nazi leader Bill White. White, the leader of the American National Socialist Workers party, is currently being probed by the FBI after suggesting that the “Jena 6” should be lynched and listing the home addresses and phone numbers of five of the teenagers on his website.

By last year, the bad press, which included an extensive piece on racism and sexism at the paper by Max Blumenthal, seemed to be taking its toll on newspaper’s professional employees. Several prized staffers, including Rowan Scarborough, Charles Hurt and Bill Sammon, (who like Blankley, is a former Pulitzer Prize nominee, and a FOX News contributor), left for greener pastures. Meanwhile, former Times star writer George Archibald, who has blogged extensively on the racism allegations against Coombs, called for “regime change” at the paper. 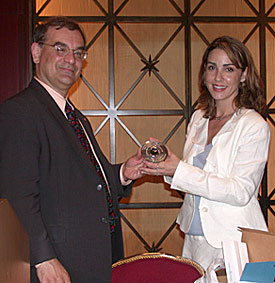 And who has Coombs hired to take their place? Meet Sara Carter, the 2006 winner of the Katz Award for Excellence in the Coverage of Immigration given to “promote informed and fair reporting” on immigration.

It’s awarded by the Center for Immigration Studies, an organization that claims to be nonpartisan but which was dreamed up by hate group leader John Tanton, the architect of much of the modern anti-immigration movement and a major producer of racist, anti-immigrant material.

Carter, meanwhile, has been severely criticized by Salon.com for her heavily biased coverage and fact-stretching reporting on Ignacio Ramos and Jose Compean, former U.S. Border Patrol agents who were convicted and are currently serving 10- and 11-year sentences for shooting an unarmed immigrant and then covering up the episode. In her Aug. 5, 2006, “Convicted Border Agent Tells His Story," Carter attempted to validate the agents’ self-defense claim, which was disproved by the prosecution. Carter’s misleading reporting led to the lionizing of Ramos and Compean by CNN’s Lou Dobbs, certain corners of Congress and nativist extremists everywhere.

Since being hired by the Times, Carter’s shoddy journalism hasn’t stopped – though it still fits well into Coombs’ editorial slant against immigrants. On Aug. 8, she wrote a piece headlined “Terrorists Teaming with Drug Cartels” in which she declared in her opening paragraph that “Islamic extremists embedded in the United States … are partnering with violent Mexican drug gangs to finance terror networks in the Middle East.” Her source was a “confidential” Drug Enforcement Administration report.

Garrison Courtney, spokesman for the DEA, told Hatewatch that Carter’s story was out of context. The report she cited was not a confidential intelligence document but a “white paper” — a document that presents a “summary of ideas” about what “hypothetically” could happen. Courtney said he contacted Carter about fudging the facts, “she didn’t give me a very positive response.”