WESTCLIFFE, Colo. — A top aide to imprisoned fundamentalist Mormon polygamist leader Warren S. Jeffs has purchased $2 million worth of property in five locations along the remote eastern flank of the rugged Sangre De Cristo Mountains about 175 miles southwest of Denver, Hatewatch has learned.

Men, women and children members of the Fundamentalist Church of Jesus Christ of Latter-Day Saints, or FLDS, are occupying at least three of the properties. Their presence is causing anxiety among neighbors and public officials unsure how to react to the presence of a racist sect known to coerce underage girls into plural marriages.

“Quite frankly, we don’t know what to do,” said Custer County Sheriff Fred Jobe. “We are definitely aware that they here … but until they break some laws, there isn’t much that we can do.”

The real estate purchases by Lee A. Steed, a senior member of the FLDS, constitute the largest known cluster of land holdings outside of the FLDS-controlled communities of Colorado City, Ariz. and adjacent Hildale, Utah. Mr. Steed paid $725,000 cash to acquire two of the properties, real estate records show.

County commissioner Dick Downey said government officials have been quietly observing the influx of FLDS into the community but have not made it publicly known. But rumors abound in this small town and adjacent Silver Cliff, Colo., with a combined population about 1,000.

"We are concerned because of the various reports that we have received and the media exposure we have seen about this group in the last few months," Downey said.

The FLDS attracted worldwide attention last month when Texas authorities raided a church ranch and removed 462 children and placed them into foster care pending the outcome of child custody hearings. Texas Child Protection Services reports that among the children are as many as 31 girls under 18 who have babies or are pregnant. Authorities allege that the FLDS is threatening the welfare of all the children because leaders indoctrinate girls to enter into polygamous marriages and bear children at a young age. Last year, after two years on the lam, FLDS leader Warren Jeffs was convicted as an accomplice to the rape of a young girl who was forced to marry her cousin.

The Southern Poverty Law Center placed the FLDS on its hate group list in 2005 for its racist beliefs, including the notion that black people have been cursed by the devil and are an inferior race. The FLDS is a breakaway sect from the 13-million member Mormon Church based in Salt Lake City, which disavowed polygamy in 1890 as a condition of Utah gaining statehood, and which began allowing blacks to become priests in 1978 ¬— a move that Jeffs called a victory for the devil.

The FLDS has openly practiced polygamy since the 1930s in Colorado City and Hildale, where church members control local governments. In recent years, the FLDS has begun to disperse to other areas, including a compound in Pringle, S.D., southwestern Colorado near Cortez, and the 1,700-acre ranch in Eldorado, Texas, that was raided in April.

Steed allegedly played a key role in helping Jeffs elude a nationwide manhunt in 2005 and 2006 when Jeffs was on the FBI’s Ten Most Wanted List. Acting on orders from Jeffs, Steed purchased secluded properties in Colorado that Jeffs used as hideouts, according to a civil suit filed in St. George, Utah by a former FLDS member.

Custer County property records show that Steed filed a quit claim deed on a Westcliffe hideout in July 2006, walking away from a $40,000 down payment made in January of that year. The property was returned to the original owner one month before Jeffs was arrested. Jeffs is serving two, consecutive five-year-to-life sentences in Utah on the rape conviction and is awaiting trial in Mohave County, Ariz., on sexual misconduct and incest charges.

Jeffs’ arrest in August 2006 and conviction on two counts of accomplice to rape charges in September 2007 has not ended Steed’s acquisitions in Custer County and adjacent Fremont County. The recent spate of purchases suggests that the FLDS plans to take up permanent residence in a very conservative, decidedly Christian, ranching community. The sect’s history of plural marriages is not something that is likely to lead to the group being widely accepted in the area.

“They are not going to be assimilated into the community,” said Custer County Undersheriff Craig Feldman, whose wife’s family has resided in the area for five generations and is a major Custer County landowner.

Three of Steeds’ properties are located within a few miles of Westcliffe. In November 2006, Steed purchased a 6,000-square foot, nine-bedroom, six-bath, log home on 35 acres (pictured below) that was in foreclosure for $350,000 cash, according to Custer County records. Neighbors say a large group of men and women soon moved into the two-story structure and began working around the clock.

Kathleen Kerr, who owns a house next door, said activity on the Steed property has ruined the community’s rural flavor with bright lights on all night, constant construction, and noise generated by ATVs patrolling the property as well as occasional gunfire. “It’s just not quiet and peaceful there anymore,” Kerr said, adding that she has put her 35-acre, three-bedroom cabin retreat up for sale.

Following a pattern seen throughout Colorado City and Hildale where many homes are encircled by fences, Steed built a six-foot-high wooden fence across the front of the property soon after moving in around Thanksgiving 2006. The fence stands in sharp contrast to most homes in the community that refrain from blocking spectacular mountain views. 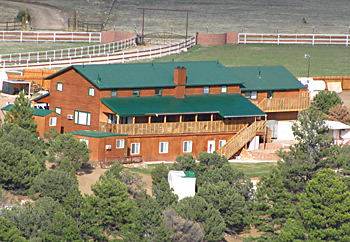 Another neighbor, who asked not to be identified, said the Steed property has generated a lot of traffic on what was before a very lightly traveled gravel road. “There were lots of expensive vehicles coming and going, mostly during the night,” the neighbor said.

The FLDS men and boys would sometimes talk to neighbors, residents say, but the women, dressed in their prairie-style dresses, hide from view. The neighbor said most of the men and boys left the property earlier this winter and that the repairs that were once quickly made have been left unattended.

The property, however, is still occupied. Hatewatch observed a large white SUV enter the property on May 11 and drive up to the house.

Steed, who did not return a message left on a phone number he listed with Custer County, added to his holdings in December when he purchased 80 acres of grazing land about three miles southwest of Westcliffe for $428,000, with a $30,000 down payment and a $398,000 mortgage.

Steed’s Custer County portfolio expanded again last month when he purchased 80 acres about six miles south of town that includes a ranch house, a large barn and other outbuildings. Undersheriff Feldman said he has seen FLDS men, women and children at the property while working on a house Feldman is remodeling across the road.

Steed’s purchase has not yet been recorded, but an official with the Custer County Assessor’s Office confirmed that Steed owns the property and is remodeling the home. The previous owner purchased the property, which includes irrigated pasture, for $650,000 in April 2007.

In addition to the three Custer County properties, Steed purchased two properties in adjacent Fremont County in 2007. In July, Steed bought a 4,600-square-foot, six-bedroom log home in an upscale development in Cotopaxi for $375,000 cash. The log home sits high on a hillside with a view of the still snow-capped Sangre de Cristo Mountains.

Last December, Steed bought 40 acres with a ranch house on the west of state highway 67 about 10 miles south of Florence. He paid $275,000 for the property, according to county records.

At the time of the purchase, the homestead included a 2,400-square foot house and an outbuilding. But considerable construction activity is visible from the highway, and a large building that appears to be an additional residence hovers above the original home. There is also evidence of excavation on a hillside next to the highway.

Kerr said she and her husband noticed similar excavation work done at the Westcliffe residence. “It looked like they were building underground storage or bunkers,” she said.