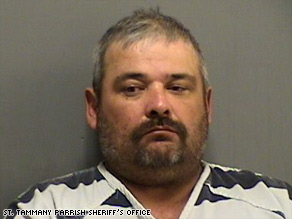 Raymond “Chuck” Foster (right), the Ku Klux Klan leader who was arrested yesterday for killing a woman following a backwoods Klan initiation ritual, has a history of Klan activity dating back at least to January 2001.

Foster, 44, was the founding Imperial Wizard, or national leader, of the Southern White Knights of the Ku Klux Klan, a Klan faction that formed on January 1, 2001, in Watson, La.

During the next three years, the group developed chapters in three other states while maintaining a low profile with the exception of a single incident in 2003 when a White Knights official in Ohio, Jeremy Parker, drew attention by posting instructions for making a pipe bomb on the Internet in response to a Martin Luther King, Jr. Day celebration. "Sure would hate to see anything happen," he wrote.

In 2004, the Southern White Knights had active chapters in Savannah, Ga., Homosassa Springs, Fla., and Marion, Ohio, as well as the founding chapter, which by that time had relocated to Denham Springs, La.

The Southern White Knights disbanded in early 2005. Most of its members–not including Foster—resurfaced later that year as the Empire Knights of the Ku Klux Klan, a relatively large Klan group that currently has nine active chapters in eight states, none of them in Louisiana.

The woman Foster allegedly murdered, identifed by police as 43-year-old Cynthia C. Lynch, was apparently recruited over the Internet to join Foster’s latest Klan group. Today’s media accounts of this rapidly developing story have variously identified that group as the Dixie Brotherhood and/or the Sons of Dixie.

Hatewatch is unaware of any Klan group by either of those names operating anywhere in the country.

However, last year a new Klan group calling itself the Dixie Rangers Knights of the Ku Klux Klan formed in Walker, La., about 80 miles from the rural scene of the alleged murder.

It’s unclear at this point if the Dixie Rangers and the Dixie Brotherhood/Sons of Dixie are one and the same.

Law enforcement officials said that Lynch took a bus from her home near Tulsa. Okla., to Slidell, La., where two members of the “Dixie” Klan group picked her up last Friday and transported her to a campground near the Pearl River. At least eight members of the Klan group were present, including Foster.

After a series of rites including the shaving of her head, the Klan members took Lynch to a camp on a sandbar that was accessible only by boat. There the initiation continued. St. Tammany Sheriff Jack Strain told the Times-Picayune the rituals on the sandbar consisted of lighting torches and “running around in the woods.”

By Sunday night, Lynch had reportedly changed her mind about joining the Klan and wanted to leave the camp. This sparked an argument with Foster, who allegedly pushed her down and killed her with a single shot from a .40 caliber handgun.

According to Strain, Foster tried to dig the bullet out of Lynch's body with a knife before ordering his followers to set fire to her belongings and get rid of her body.

The next morning, Foster’s son, Shane Foster, 20, and another member of the Klan group, Frank Stafford, 21, asked a convenience store clerk in nearby Bogalusa if he knew how to remove bloodstains from clothes. The clerk, who recognized the men, alerted to local sheriff’s office.

Following a rapid investigation, St. Tammany Parish deputies raided the campsite, arresting five Klan members who had fled into the woods. The elder Foster, who initially escaped, turned himself in later that day.

At the campsite, investigators found weapons, Confederate battle flags, KKK banners, five rank-and-file white Klan robes, and one black Imperial Wizard robe. They found Lynch's corpse in a weedy ditch about a half-mile from the sandbar.

Chuck Foster has been charged with second-degree murder. His son, along with Stafford and five other Klan members—Random Hines, 27; Danielle Jones, 23; Alicia Watkins, 23; Timothy Michael Watkins, 30; and Andrew Yates, 20—were charged with obstruction of justice.

For example, on Nov. 23, 2004, a member of America’s Invisible Knights of the Ku Klux Klan was accidentally shot in the head during an initiation ritual that involved a prospective member being strung from a tree with a noose around his neck, standing on his tiptoes, while Klansmen shot him with paintball guns. The accidental shooting occurred when one of them decided to scare the initiate (who survived) by firing a real gun in his direction, and a wayward paintball altered the shooter’s aim.