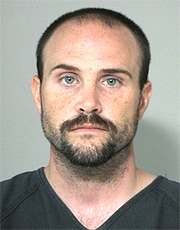 A federal fugitive with past ties to the Patriot group Oath Keepers was arrested without incident Thursday southwest of Houston, Texas, just days after fleeing a campground during a law enforcement dragnet.

Charles Alan Dyer, 31, a former Marine, was arrested after leaving a Sonic drive-in where he had purchased a Route 44 red cherry limeade, The Houston Chronicle reported. Fort Bend County sheriff's Deputy Jeremy Goodrich, who made the arrest, said Dyer was  wearing a baseball cap, blue jeans, with a T-shirt over his shoulder. After providing a fictitious name, he was arrested without resisting and seemed very tired, the deputy said. "He said he was just done," Goodrich said.

The arrest at 9 a.m. (CDT) occurred not far from a campground where Dyer was staying last weekend before he fled into a wooded area and escaped as law officers attempted to arrest him.

A nationwide manhunt for Dyer was launched after he failed to appear in court in Oklahoma on Aug. 15 on charges of raping a seven-year-old girl.  Three days earlier, Dyer’s home in Stephens County, Okla., burned to the ground.

Two of Dyer’s associates, possibly affiliated with a militia group, have been arrested in connection with the fire, according to Stephens County Sheriff Wayne McKinney. In one press interview, the sheriff described Dyer as a “Timothy McVeigh-like” individual.

In addition to the child rape charge, Dyer was accused of possessing an unregistered grenade launcher, one of three stolen from a California military base in a weapons shipment bound for Iraq.

Dyer posted YouTube videos using the name “July 4 Patriot.”  He sent a letter to his lawyer on Monday, claiming his arrest was part of a government conspiracy. “I have taken this final opportunity while I am still alive to make a statement to the public,’’ Dyer said.

“I have been pushed to the limits multiple times by law enforcement and the judicial system in an attempt to cause me to take violent action against them,’’ Dyer wrote in the letter.  “If I do, I know I will be the monster they depict me as.”

“Our judicial system is nothing more than a system of liars and crooks,’’ Dyer wrote, “working under the color of the law, where the rich go free and the poor are made to suffer injustice. Something MUST be done to expose it.”

Even before Dyer became the subject of a nationwide manhunt, Oath Keepers was attempting to distance itself from the man it once considered as the group’s liaison with the U.S. Marine Corps.

Stewart Rhodes, the founder of the two-year-old organization that encourages police officers and soldiers to disobey orders that may be unconstitutional, acknowledged the group’s contacts with Dyer.

Jay Stang, the Texas vice president of Oath Keepers, met Dyer at the group’s rally on Lexington Green in Virginia on April 19, 2009, and “they became friends,” Rhodes said in a statement posted on the group’s web site.

Before Dyer’s arrest, Texas Oath Keepers chapter president John Shirley, who is a Houston Police Department sergeant, and Stang contacted Dyer’s attorney and the FBI and offered to mediate his peaceful surrender.

“Early on, Charles Dyer supported the mission of Oath Keepers, including encouraging his YouTube audience to attend our gathering on Lexington Green, April 19, 2009,’’ Rhodes said in a prepared statement.

At the rally, Rhodes said, “I spoke to him about the possibility of serving as our national liaison to the Marine Corps once he got out of the Marines. At that time he told me of his intent to train and help establish private militias when he was discharged from the Corps.’’

“I let him know that such a course of action would be incompatible with a position within Oath Keepers, (and) he (Dyer) understood,’’ Rhodes said.

“Over the next few months, we kept in touch and I tried to change his mind, since I thought his abilities could be best used in outreach to the currently serving, but he would not relent, and we both agreed that it would be best if he did not join Oath Keepers. He went his own way.”

Rhodes said he urged Dyer to surrender and face trial.