About a dozen African American pastors joined anti-gay extremists today in condemning the Southern Poverty Law Center for using its “hate group” label to describe faith-based organizations that demonize the LGBT community, characterizing it as part of an orchestrated liberal plot. 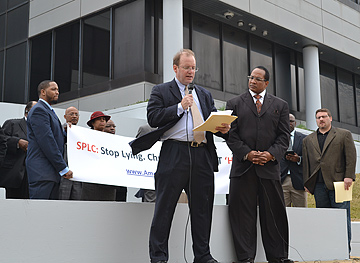 The pastors spoke at a press conference staged outside the SPLC offices in Montgomery, Ala., by Americans for the Truth About Homosexuality (AFTAH), which the SPLC lists as an anti-gay hate group.

“The SPLC has moved from monitoring actual hate groups like the KKK and neo-Nazis to slandering mainstream Christian organizations with that very same hate group label,” said Matt Barber of the Liberty Counsel, affiliated with Jerry Falwell’s Liberty University. “By extension, the SPLC is smearing billions of Christians and Jews worldwide as haters simply because they embrace the traditional Judeo-Christian ethics.”

Rachel Conner of Abiding Truth Ministries, also listed as a hate group, charged that  “the Southern Poverty Law Center has now become a tool of the God-haters, promoting hatred in the form of vicious lies against Christianity.”

In fact, it has everything to do with hate and intolerance.

Mark Potok, editor of the SPLC’s Intelligence Report and this blog, responded to the accusations: “Our listing of anti-gay hate groups is completely unrelated to religion, Christianity or the Bible. These groups are listed because they repeatedly lie in an effort to defame LGBT people, an exercise they’ve been extraordinarily successful at. The idea that we are criticizing these groups because they represent Judeo-Christian morality is simply ludicrous.”

The SPLC does not identify anti-gay hate groups based on their religious views. Instead, the SPLC lists anti-gay groups on the basis of spreading known falsehoods and demonizing propaganda against LGBT people, such as the claim that gay men largely orchestrated the Holocaust.

In 2007, LaBarbera claimed that there was “a disproportionate incidence of pedophilia” among gay men — a devastating accusation, but one that is entirely false, according to all the relevant scientific organizations. LaBarbera has also compared the alleged dangers of homosexuality to those of “smoking, alcohol and drug abuse,” and the AFTAH website describes it as a “lethal behavior addiction.”

In a written statement read at the news conference, Abiding Truth Ministries founder Scott Lively called on God to destroy the SPLC: “My prayer, as one who really does hate irrational prejudice, is that the Lord by His sovereign power will remove this dangerous, hate-spreading organization from our nation and cause its leaders and members to repent for their wickedness. … I want to make clear that I am asking God himself to destroy their organization.”

What Lively might not know is that others have tried, including Klansmen who pleaded guilty to firebombing the center’s office in 1983.