Former Arizona Senate President Russell Pearce, the author of his state’s draconian anti-immigrant S.B. 1070 law, issued a statement last night denouncing “the local media” for attempting to tie him to J.T. Ready, the neo-Nazi who is believed to have murdered four people earlier in the day before being shot to death himself.

What an utter crock.

After a brief nod to the “horrific and evil” nature of the killings — Ready’s girlfriend, her daughter, the daughter’s boyfriend and her 1½-year-old daughter were his victims — Pearce launched into a self-serving diatribe. He accused the media of a “lie” that was “told and retold,” and claimed that he had distanced himself from Ready as soon as his neo-Nazi views became public. He also claimed that he worked with other Republicans to have Ready thrown out of a GOP committeeman’s seat. 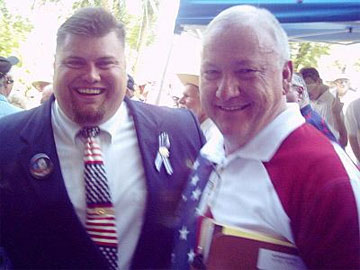 Those statements are false. The fact is that Pearce was photographed and videotaped as he palled around with Ready at a June 2007 rally. Confronted at the time by a reporter, he suggested that he hardly knew Ready or his views. In fact, as the Phoenix New Times reported, Pearce was part of a small group that celebrated Ready’s baptism into the Church of Jesus Christ of Latter-day Saints in 2003 or 2004. Not only that, but a local official of the Anti-Defamation League (ADL) had warned Pearce in detail of Ready’s white supremacism in October 2006. (“It’s hard for me to fathom,” the ADL official told New Times, “that after a one-on-one meeting with me — and all the press J.T. got — that [Pearce] was unaware of what he was and what he stood for.”) And Ready’s neo-Nazi views were again described in March 2007, three months before the June rally where he worked the crowd with Pearce, during a panel discussion at the state Capitol that made the local newspapers.

And those views were quite something. Ready wanted to mine the border, described Jews as “parasites” and said the United States was a “white, European homeland.” He patrolled the border with other heavily armed neo-Nazis in his U.S. Border Guard group and threatened to use deadly force against immigrants. He denounced “n------, homosexuals, mexicans, jews [sic]” and was a prominent member of the National Socialist Movement, the country’s largest neo-Nazi group. He was also a violent thug who was drummed out of the Marines after two courts-martial and had a criminal record for assault. And he repeatedly ran for political office.

In fact, the same year that Pearce was warned by the ADL of Ready’s views, the neo-Nazi was running for the Mesa, Ariz., City Council. In a video supporting Ready, Pearce called Ready a “true patriot,” according to New Times. The newspaper also reported that Ready described Pearce as a “father figure” who had groomed him for a possible run for the Arizona state legislature. At the time of Ready’s death, he was running for sheriff of Pinal County.

In yesterday’s statement, Pearce also claimed that after “darkness took [Ready’s] life over,” Pearce “worked with others to have him removed from his local position within our Republican Party because there has never been and will never be any room in our Party or our lives for those preaching hatred.”

There’s no evidence of that at all. In fact, it was three Arizona congressmen who joined forces to try to boot Ready out of his GOP precinct committeeman post in 2008. They were unsuccessful and Ready served out his term.

Pearce is best known for his sponsorship of Arizona’s punishing anti-immigrant law, much of which is held up in the courts, and became Senate president largely on the basis of that effort. (He is also remembered for, in 2006, E-mailing his supporters an anti-Semitic article from the National Alliance, for many years America’s leading neo-Nazi organization.) Last fall, in an unprecedented local occurrence, Pearce was recalled in a voter referendum and currently has no official post.

Although many details of yesterday’s tragic killings remain murky — including the motive — the slaughter once again highlights the ugly nature of America’s nativist movement. It was, after all, the second killing carried out by a leader of a border vigilante group. (In 2009, Shawna Forde, leader of Minuteman American Defense, joined two confederates in murdering a Latino man and his 9-year-old daughter; she was sentenced to death last year.) But the most important lesson of the killings may be to remind Americans of the ties of the anti-immigrant movement to opportunistic bigots like Russell Pearce.