Three Florida leaders of the American Front, a California-based group of racist skinheads known for its predilection for violence, have been arrested on conspiracy and hate crime charges, along with four other members of the gang. 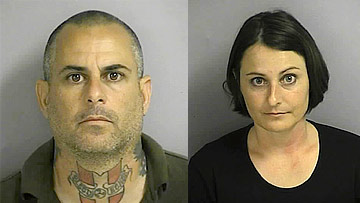 Two of the leaders — Marcus Faella and his wife Patricia Faella — were arrested on Friday, while the third, Mark McGowan, was picked up over the weekend, as were the four lower-ranking group members. The three leaders were charged with instructing another person in the use of firearms or explosives while knowing that they would be used “in, or in furtherance of, a civil disorder in the United States.”

Officials in Florida initially offered few details of the arrests or the alleged conspiracy. But a source close to the investigation said they are, in effect, the second round in a major, ongoing investigation.

In late March, the Orange County, Fla., Sheriff’s Office in Orlando announced the arrests of six people who belonged to or were associated with the Outlaws motorcycle club or the 1st SS Kavallerie Brigade Motorcycle Division, a neo-Nazi gang started by former Aryan Nations official August Kreis III. A sheriff’s official said the group wanted to “blow up buildings and houses” and to kill rivals.

The American Front was started in the late 1980s. It became a well-known group in the early 1990s, but was associated with a large amount of violence, which may have accounted for its fading later in the decade as law enforcement brought several major cases. It saw a major resurgence around 2007 under David Lynch, a charismatic leader in Sacramento, Calif., who was one of the group’s original founders But Lynch was murdered by an unknown attacker in his home on March 2, 2011, and in California, at least, the group has shrunk significantly since that time. Now, most of its activities — and, apparently, most of its members — are in Florida.

The American Front is known to have been associated with the Confederate Hammerskins, another racist skinhead group known for its violence. In 1993, Marcus Faella was the director of the Melbourne, Fla., chapter of that group.

The American Front has a long association with criminal violence. In 1990, John Daly, a member who was secretly Jewish, was nearly killed after group members learned of his background and tried to drown him in the surf in Daytona Beach, Fla. The next year, according to the National Consortium for the Study of Terrorism and Responses to Terrorism, police in Beaverton, Ore., found a hit list of Portland law enforcement officers targeted by the group. In 1993, the consortium said, American Front members were implicated in a series of bomb attacks on black, gay and Jewish people. At the time, prosecutors described the attacks as part of an attempt to ignite a race war.

The American Front is officially based in Sacramento, Calif., and last year had chapters in the Florida towns of Lynn Haven and St. Cloud, along with others in the New Jersey cities of Hackensack, Haledon and Roselle.