Derek Black, son of the former Alabama Klan leader who now runs the largest racist Web forum in the world, has renounced white nationalism, saying that he has been through “a gradual awakening process” and apologizing for his past activism.

In an E-mail (pdf) to the editor of this blog earlier this week, Black, 24, wrote that he had come to see the arguments of white nationalism as “principally flawed,” adding that he had realized that American society is marked by an “overwhelming disparity between white power and that of everyone else” and that white nationalism was really about “an entrenched desire to preserve white power at the expense of others.”

“Advocating for white nationalism means that we are opposed to minority attempts to elevate themselves to a position equal to our own,” wrote Black, who recently finished his third year at the elite New College of Florida. “It is an advocacy that I cannot support, having grown past my bubble, talked to the people I affected, read more widely, and realized the necessary impact my actions had on people I never wanted to harm.”

It was a remarkable statement for Black, whose father, Don Black, once served time in prison for plotting a racist invasion of a small Caribbean nation and founded and still runs Stormfront, a white supremacist Web forum. The younger Black was raised in the racist movement, had by age 12 created a racist children’s page on his father’s website, and until recently hosted a radio show featuring racist guests.

But it was also the latest step in a fairly clear evolution. 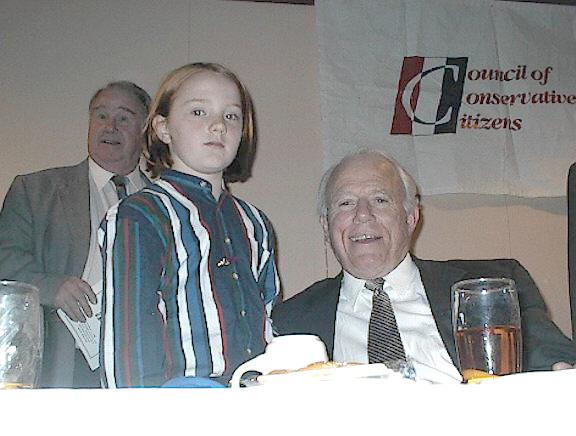 Already, at the tender age of 9, Derek Black was attending racist events like this Nov. 7, 1998, gathering in Jackson, Miss., of the white nationalist Council of Conservative Citizens (CCC), a group that has described black people as a “retrograde species of humanity.” He is pictured here with then-Mississippi Gov. Kirk Fordice, one of few politicians who was then still willing to be seen at CCC events.

Last November, Derek Black posted a statement on a students-only forum at his college in which he explicitly said he was not a white supremacist, a neo-Nazi or a Klansman, and revealing that he had some unexpected views, such as support for same-sex marriage, environmental regulation, and legal abortion. But he also said in the statement, which was made public on this blog in December, that he was not renouncing white nationalism and did not see it as incompatible with his other views.

In his E-mail this week, Black said that he was already moving away from white nationalism at the time, but that “I was not prepared to risk driving any wedge” into his relationship with his family, “whom I respect greatly, particularly my father.” But, he added, “After a great deal of thought since then, I have resolved that it is in the best interests of everyone involved, directly or indirectly, to be honest about my slow but steady disaffiliation from white nationalism.” He described himself as having spent “the past few years … disentangling myself from white nationalism,” and added that he had closed down his radio show permanently this January. He said that he had not posted at all on Stormfront this year, and only once in 2012. He said he did attend a Stormfront conference in 2012, but would not do so again this year.

“I now consider this belief system principally flawed,” he said. “Most arguments that racial equity programs disadvantage whites who would otherwise be hired or accepted to academic programs mask underlying anxieties about the growth of non-white social status. It is impossible to argue rationally that in our society, with its overwhelming disparity between white power and that of everyone else, racial equity programs intended to affect the deep-rooted situation represent oppression of whites.” Indeed, Black added, “The advancement of minorities in the US is not insignificant, but has not ended (let alone reversed) their circumstances.”

Black was explicitly apologetic. “I acknowledge that things I have said as well as my actions have been harmful to people of color, people of Jewish descent, activists striving for opportunity and fairness for all, and others affected.”

“I can’t support a movement that tells me I can’t be a friend to whomever I wish or that other people’s races requires me to think about them in a certain way or be suspicious of their advancements,” Black wrote toward the end of his four-page statement. “Minorities must have the ability to rise to positions of power, and many supposed ‘race’ issues are in fact issues of structural oppression, poor educational prospects, and limited opportunity. The differences I thought I observed didn’t go nearly as deeply as I imagined. I believe we can move beyond the sort of mind-boggling emphasis white nationalism puts on maintaining an oppressive, exclusive sense of identity — oppressive for others and stifling for our society.”