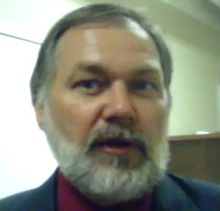 Anti-LGBT activist Scott Lively is known both for his bizarre theories – notably his long-running thesis that gays were responsible for the Holocaust – and for his ability to stir up anti-gay sentiment abroad, particularly in places like Uganda, for which he eagerly claims credit.

His latest claims and theories fit the pattern: Lively now claims that he inspired Russian President Vladimir Putin – whom he warmly describes as “the only world leader capable of standing up to the West … championing the traditional marriage and Christian values” – to sign a ban on “homosexual propaganda” into law. Oh, and by the way, President Obama seems also to probably be the Antichrist.

NBC News’ Tony Dokoupil interviewed Lively recently, and Lively repeated his previous claim that he inspired the spate of anti-LGBT legislation that has been enacted in Russia in recent years. “Yes, I think I influenced the Russian law,” Lively said.

The NBC report noted that there is some substance to the claim. Boris Dittricht, the chief LGBT advocate for Human Rights Watch, notes that there was no shortage of homophobia in Russian culture before Lively arrived, but observed that “the American pastor appears to have given shape to that free-floating hatred.” Dittrich noted that public bans on homosexual propaganda followed shortly after Lively would pass through those regions, preaching and promoting just such a solution by meeting with politicians and appearing with them in public. Before Putin made it a national standard, more than a half-dozen jurisdictions had passed such bans.

The NBC report includes video of Lively while touring Russia and using some of the eliminationist rhetoric he typically deploys. “There is a war that is going on in the world,” Lively is seen telling a Novosibirsk crowd through a translator. “There is a war that is waging across the entire face of the globe. It’s been waging in the United States for decades, and it’s been waging in Europe for decades. It’s a war between Christians and homosexuals.”

On his own website, Lively responded with dismay to the NBC report, claiming that “this isn’t journalism. It is leftist political spin.”

“My major beef with Tony and all of the ‘progressive’ journalists who dominate the mainstream media is that their ‘news’ stories always reflect the ‘gay’ perspective of what is still a two-sided argument,” Lively wrote. He concluded that “the first loyalty of progressive journalists is to their ideology, not to truth.”

Lively also soft-pedaled the surge of anti-gay violence that has accompanied Putin’s campaign, including videos that portray neo-Nazis kidnapping and torturing young gay man. Much of the violence has been committed by openly fascist skinhead factions, as Russia’s neo-Nazi movement has swelled in numbers at the same time.

Lively shrugs it off: “And the Russian incident appears to me to be another case of gay on gay crime, but even if it isn’t, it’s just random crime completely unrelated to and unjustified by the new Russian law.”

Meanwhile, Lively earlier this week appeared on the evangelical End Times radio show TruNews with host Rick Wiles and explained that the Apocalypse was at hand because of the alignment of current events. And he made clear, without naming him, that President Obama himself is the Antichrist, and that he is secretly colluding with satanic gays to bring about the end of the world:

Lively began his anti-gay career in Oregon in the 1990s, leading the charge of the right-wing Oregon Citizens Alliance as it sponsored a seemingly endless array of anti-LGBT initiatives, including a 1992 ballot measure that would have prohibited all authorities in the state from trying to “promote, encourage or facilitate homosexuality, pedophilia, sadism or masochism.” He rose to stardom among some right-wing evangelicals for his 1995 book The Pink Swastika: Homosexuality in the Nazi Party, which contended that it was actually a secret faction of gay Nazis who engineered the Holocaust.

His virulently anti-LGBT organization, Watchmen on the Walls, has been noted for forming alliances with far-right evangelicals in Eastern Europe and Africa.