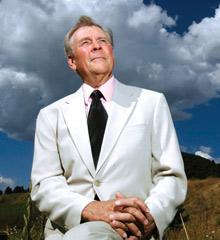 It was just a matter of time before Paul Cameron surfaced in Russia once again (he has made trips there in the past) to spread his toxic anti-LGBT propaganda. Buzzfeed reported yesterday that Cameron – who has been censured by several academic professional organizations for his shoddy research methods and extreme anti-LGBT animus – was apparently invited to address a Duma roundtable on “family values.” There, according to Buzzfeed, he falsely claimed, among other things, that a third of LGBT people support pedophilia.

We shouldn’t be surprised at statements like that from Cameron, who has been falsely linking LGBT people to pedophilia for decades and making other, even more bizarre claims. When addressing an audience in 2010 in Krakow, Poland, for example, Cameron claimed that LGBT people have sex with animals. He has also relied on urban mythology to claim that gay men insert gerbils into their rectums.

Buzzfeed posted, with translations, some of the tweets that Russian lawmaker Alexander Sidyakin made during Cameron’s talk. From the tweets, Sidyakin, who works closely with Russian President Vladimir Putin, appears to support Russia’s current anti-gay laws and the passage of even more. In one tweet, Sidyakin claimed Cameron’s statistics were “interesting” and, in another, bragged to a reporter that there was no need to include experts who disagree with Cameron, stating that “[w]e didn’t even invite a second point of view,” suggesting that the roundtable is attempting to increase support for more anti-gay laws in Russia.

Cameron’s speech took place on October 13, just before the October 15-16 planning committee meetings of the World Congress of Families, which will be holding its international right-wing (and anti-LGBT) conference in Moscow next September. Several American anti-gay activists, including Brian Brown of the National Organization for Marriage (at least his second trip to Moscow this year) and the Holocaust revisionist Scott Lively, were in attendance. It’s unclear whether Cameron attended the planning committee meetings.

Russia has been in the global spotlight since this past summer, when Putin signed a draconian anti-gay law that bans so-called “homosexual propaganda” directed at minors, followed by another law that prohibits same-sex foreign couples from adopting Russian children. In the wake of these laws, hate and violence against LGBT people in Russia appears to have increased. Another Russian lawmaker proposed a bill in September that would deny LGBT parents custody over their children, using the discredited Regnerus study to support it. The lawmaker withdrew the bill this month but is revising it for re-submission. Earlier this month, Russia halted adoptions of Russian children by Swedish parents because same-sex marriage is legal in Sweden. Russia is currently seeking to sign legal agreements with individual countries to ensure that Russian children are not adopted by LGBT parents.

As Russia works to pass even more such legislation and crack down even more on its LGBT population, expect more American anti-gay activists to involve themselves in that country’s politics in the coming months. They’re clearly receiving a warm welcome.