The newest addition to the Involuntary People of Color Club, revealed courtesy of NBC’s “The Trisha Goddard Show,” is Craig Paul Cobb — the epithet-spewing, violence-glorifying, black-hating neo-Nazi who’s been trying to take over a tiny town in North Dakota and transform it into an all-white homeland for “Aryans.” 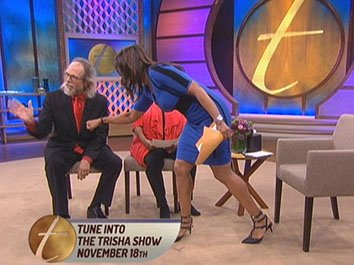 The newest addition to the Involuntary People of Color Club, revealed courtesy of NBC’s “The Trisha Goddard Show,” is Craig Paul Cobb — the epithet-spewing, violence-glorifying, black-hating neo-Nazi who’s been trying to take over a tiny town in North Dakota and transform it into an all-white homeland for “Aryans.”

It turns out that Cobb, 62, couldn’t live there himself if he succeeded.

For reasons that no one with a brain can understand, Cobb recently agreed to submit to a DNA test and then learn the results on a pre-taped episode of Goddard’s “Race in America” series that is set for broadcast on Nov. 18. The confrontation, made public in a video of the exchange obtained and published by the British paper MailOnline, is one that will live on in the annals of bizarre television history.

As she opens the envelope, Cobb leans in toward Goddard, who is black, with an interested grin. “Eighty-six percent European...” she begins, and the audience and another (black) guest begin to applaud and howl with laughter.

“And 14% sub-Saharan African!” she finishes.

Cobb moves away from his host, but the now-wooden smile stays pasted in place. “Wait a minute, wait a minute, hold on!” he says. “This is called statistical noise.”

Goddard can scarcely contain herself. “You have a little black in you, bro!” she cries, as the audience erupts and Cobb’s face darkens. “I’ll tell you what,” he spits out. “Oil and water don’t mix!” Goddard tries twice to give a fist bump to Cobb, who avoids her touch and eye as he grins sheepishly at the audience.

“I agreed to the test because I assumed it was science,” Cobb told the British paper, adding that he only later realized that it was the product of “craven and debased executives” whose “goal is to shock.” Pressed by the paper, he said, “Well, if I did have any n-----, we don’t want any more of it.” In that event, he added, he would work as a “border guard for the purebreds.”

Perhaps that’s less of a surprise than it might seem. As the Southern Poverty Law Center revealed after talking to Schoep’s ex-wife, the neo-Nazi leader knew that she was partly Arab and that she had had a child with a black man — definite no-nos in the harsh racial universe of neo-Nazis like Cobb and Schoep. That revelation resulted in widespread movement attacks on Schoep as a “race-mixer.”

Craig Cobb is certainly ridiculous. But he is not entirely alone. The reality is that those obsessed with race and anti-Semitism quite frequently turn out to have very serious secrets.

William Potter Gale, a leading American anti-Semite until his death in 1988, came from a family of devout Jews. Leo Felton, a neo-Nazi who went to prison a dozen years ago in a plot to attack Jewish and black landmarks, had a father who was black. Dan Burros, a neo-Nazi whose Jewish heritage was revealed on the front page of The New York Timesin 1965, killed himself the same day.

In recent years, one Klan leader was caught with a black transvestite prostitute. Another Klansman was found to be soliciting Latino men. Richard Barrett, the leader of the Nationalist Movement, was killed in 2010, allegedly by a young black man who told police the white supremacist had propositioned him.

Now that Cobb, like uncounted numbers of other “white” Americans, has discovered the extent of his racial “purity,” he may want to reconsider his career path. His fellow neo-Nazis are not known for their generosity when it comes to matters of race. Some of them may even be considering violence against their former comrade.

On the other hand, Cobb does have a toehold in Leith. And although 15 of the town’s 16 residents are white, there is one black man there who is married to a white woman. Perhaps Craig Cobb can find a new friend in North Dakota.