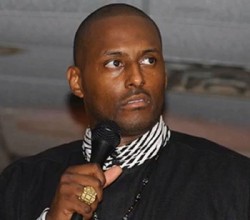 The spokesperson said the last day at the agency for the man who called himself the "Irritated Genie" was Dec. 6. He had been on leave since shortly after Hatewatch's first story on Aug. 21.

It’s unclear whether Kimathi was fired or quit. The spokesperson, Gillian M. Christensen, said privacy policies benefited her from providing any details about his departure.

It’s also unclear why it took DHS so long to sever ties with the gay-bashing, revenge-seeking, ultra-black nationalist, who advocated on his website – War on the Horizon – the mass murder of whites and the “ethnic cleansing” of “black-skinned Uncle Tom race traitors.”

“War is eminent [sic],” the website declares, “and in order for Black people to survive the 21st century, we are going to have to kill a lot of whites – more than our Christian hearts can possibility count.”

Kimathi, who worked for the DHS since 2009, was put on paid administrative leave a few days after the Hatewatch story first appeared. His salary was $110,00 a year.

Less than 48 hours after being put on leave, the Facebook page for his website declared that “the Irritated Genie is under attack from Zionist smallhats [Jews] and the Uncle Tom koons, the white-sex offenders, the haters, the conspiracy theorists, etc.”