Democratic primary voters in some Montana legislative districts will see new and unfamiliar names on the ballot this year. That’s because at least eight Democratic candidates are actually far-right “constitutionalists” and Tea Party activists. One of them is the current Republican vice-chairman for Sanders County. Two of the others have turned out to be homeless.

Most of the activity has occurred in Gallatin County, where Bozeman is the main population center and county seat. The county is home not only to Montana State University but also a variety of extremist elements. Key members of the radical Montana Freemen group were active there in the 1990s.

Chief among the new crop of candidates is Michael Comstock, a well-known local Tea Party activist and antigovernment “Patriot” movement organizer who has run previously as a Republican. This year, he filed to run in the Democratic primary for the state Senate seat in District 24, a seat currently held by Republican incumbent Roger Webb, who is running for re-election. 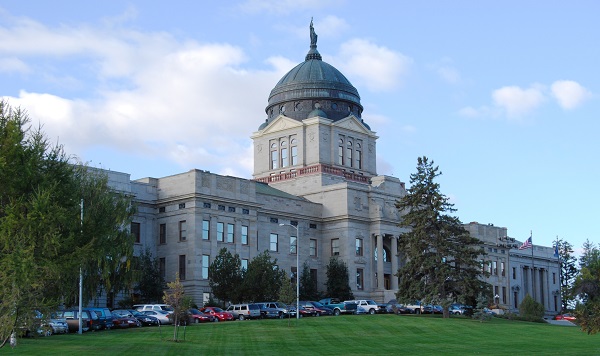 Comstock claimed during an interview with KCFW-TV in Bozeman that he’s a mainstream Democrat in the tradition of John F. Kennedy and Montana icon Mike Mansfield, and more mainstream than his primary opponent, Democratic activist and educator April Buonamici. But as the blogger Montana Cowgirl observed in her posts calling out Comstock and the other candidates, no one in Bozeman who knows Comstock is fooled by this, since he has been a colorful figure on the local political scene for many years:

Comstock’s main focus is his concern about a possible takeover by ‘a one-world UN controlled government,’ the Bozeman Chronicle has reported.  In his campaign literature and on Facebook, he says he is worried about the impending collapse of civilization.  He proudly calls himself ‘a Tea Party extremist’ and believes the Muppets have ‘sold out to socialism and bad behavior.’

A Montana Human Rights Network profile of Comstock published in a 2012 newsletter noted that he is a prolific author of letters to the local newspaper editors, where his views have been well noted:

In 2003, he complained that ‘women and minorities get a free leg up on this white male [Comstock]’ when it came to employment. He’s also advocated getting rid of the minimum wage, which he called a ‘relic of our socialist past.’ He claimed the devastation in New Orleans following Hurricane Katrina was ‘directly attributed to 100 years of corrupt liberal politics.’ In another letter about Katrina, he complained that the media gave too much credence to the ‘rantings of opportunistic race-baiting leftists.’ He said statistics proved more focus should have been on white victims. While ‘blacks did constitute the majority of deaths,’ Comstock wrote, ‘proportional to their represented numbers, whites suffered the most deaths.’

Montana Cowgirl has also identified several other bogus “Democrats” on various Montana ballots, most of them in Gallatin County. A man named Harry Pennington, for example, has filed to run as a Democrat for the state Senate seat in District 32, currently held by incumbent Democrat Franke Wilmer. Pennington’s Facebook page is rife with Tea Party material and conspiracist material about President Obama.

Pennington and another candidate – a woman named Laura Springer, who is unknown in local politics, was last registered to vote in a distant county and filed papers to run as a Democrat in House District 63 – listed the same street address in Bozeman as a third candidate, a “Patriot” and local militia organizer named Dane Peeples, who filed as a Democrat to compete against the incumbent Democrat, Rep. Tom Woods, in House District 62.

When a reporter from the Associated Press investigated why all three listed the same street address, it turned out that the home belonged to Peeples, who had no idea why the other two candidates listed his address as theirs. When the reporter asked the other two, they explained that it was because they actually were homeless at the time and needed to use an address. Springer told the reporter she was living out of motels. And Pennington turned up in a December 2013 news feature about the virtues of new government-funded services for the homeless as one of its clients.

All three, it appeared, had met up through a online “constitutionalist,” Tea Party forum called the Constitution Club, where both Peeples and Springer have active accounts, as Montana Cowgirl documented.  Among the other users on the site is a far-right extremist from Bozeman named William Wolf, who last month threatened to arrest a local judge under the auspices of “the Montana Unorganized Militia”. Peeples claims to be active in a different militia group calling itself the ‘Irregulars’ .

Meanwhile, in Sanders County – on the western side of the state, far removed from Bozeman – another dubious Democrat has filed to run for a legislative seat. Gerald Cullivier, who was elected GOP vice chair for the county in 2011, filed to run as a Democrat in House District 13. The field already features two registered Republicans and a registered Democrat.

As Montana Cowgirl explained, Cullivier is not a mainstream Republican but hails from its far-right wing, having campaigned on behalf of far-right candidate Matt French in 2012.

The Great Falls Tribune surveyed the state’s legislative races and found that, in all, eight elections featured Tea Party candidates running as Democrats. Interviewed for the story, Cullivier claimed he was running as a conservative Democrat, having broken with the Republican Party because it “wasn’t conservative enough.”

A fellow Tea-Party conservative from Sanders County, Terry Caldwell, has similarly filed to run as a Democrat in House District 14, also claiming to have a desire to make the Democratic Party more conservative.

There were others: In the Choteau area, arch-conservative David Brownell filed for the state Senate District 9 seat against registered Democrat Joan Graham. Brownell, too, claimed to be merely a conservative Democrat, though he knew nothing of the party’s platform.

The Tribune found another dubious Bozeman-area candidate: Kathy Hollenback, running against registered Democrat Denise Hayman for the nomination in House District 66. Hollenback also lists a dubious address – one belonging to Gallatin County Republican precinct chair David Ponte – and appears mostly to have been active in Tea Party politics prior to this year.

The Montana Human Rights Network has seen similar behavior in the past. “I would generally say that we hit, like most people in the country, a peak of extremist filings in 2010,” MHRN co-director Rachel Carroll Rivas told Hatewatch. “We saw a lot of those people elected to office here in Montana. And I think we actually saw a lot of pushback from the public and from within the mainstream Republican Party on some of those ideas.

“Some of those more wild-card extremists have actually made their way out of elected office because, you know, making Anderson Cooper isn't necessarily good for the party when it's a joke,” Rivas noted, referring to the national attention that a Montana Tea Party legislator received for proposing a “birther” bill requiring all presidential candidates to provide their birth certificates.

“That being said, we still have a very conservative arm of the Republican Party, and the dial, because of what happened in 2010, has been moved right. So it's harder to pinpoint in some ways who are the extremists because the dial has moved so far that there's a large number of people that are included in the ‘responsible’ camp.”

Montana Democratic Legislative Campaign Committee Director Lauren Caldwell told the Tribune that the primary challenges came as a surprise. “It appears there’s an organized effort to file tea party Republicans as Democrats,” Caldwell said Wednesday. “It is sort of dirty politics at its worst. The goal appears to be to deceive voters.”