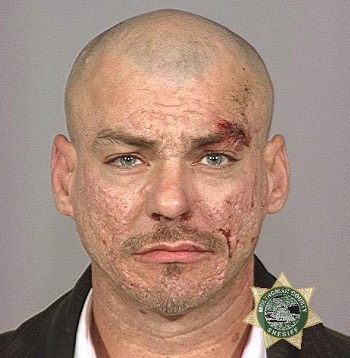 A Washington state man with a long criminal history of legal entanglements – and who has claimed in the past to be affiliated with the white supremacist Aryan Brotherhood prison gang – allegedly shot and critically wounded a local police officer Monday in Vancouver, Wash., during a routine traffic stop.

James Todd Sapp, 47, of Vancouver was arraigned this week on charges of attempted murder, robbery, and unlawful possession of a firearm after he reportedly opened fire on Vancouver police officer Dustin Goudschal, a six-year veteran who had pulled Sapp and a companion over in the black pickup Sapp was driving.

Sapp reportedly drove away after the shooting and wrecked the pickup a short distance away. His companion, another Vancouver resident named Timothy Plantenburg, told police he caused the wreck by grabbing the steering wheel, and that Sapp fired his gun at him as he fled the scene.

According to the police, Sapp then attempted to carjack a vehicle belonging to an elderly man, who resisted the robbery attempt and was aided by passersby. Sapp nonetheless was able to drive away in the man’s vehicle, and police caught up to him and arrested him a short time later.

Sapp has a long criminal record, including six prior felony convictions. He has claimed to be a member of the Aryan Brotherhood prison gang.

One of his previous run-ins with the law included a 2012 case in Clark County where Sapp allegedly assaulted a 12-year-old boy. The boy told a relative, who confronted Sapp, who allegedly punched the man in the face, breaking his nose, and called him a “stupid (expletive) Mexican.”

When police investigated, they allegedly found an illegal weapons cache at Sapp’s home, amid a room in which Sapp kept a doll collection. Sapp pleaded guilty to assaulting the boy and was given a prison term, but the weapons charges were eventually dropped.

Prosecutors noted at the time that Sapp claimed to be a member of the Aryan Brotherhood. However, even though Sapp indeed has tattoos of swastikas and one reading “White Power,” he does not have an Aryan Brotherhood tattoo, usually one of the signs of actual membership.

Sapp reportedly also told Gresham police, after a 2005 arrest, that he belonged to the Aryan Brotherood.

Officer Goudschal was originally listed in critical condition after the shooting, but was upgraded to stable condition on Wednesday.