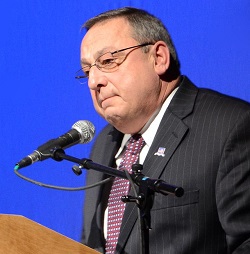 Maine Gov. Paul LePage, a Republican elected in 2010 as a “Tea Party” candidate, admits that he held a number of meetings last year with leaders of an antigovernment sovereign citizen group, as revealed in a new book excerpt published this week.

But he now claims that the meetings were not an endorsement of the conspiracy theories and extremist politics that were discussed – rather, he was simply listening to his constituents.

The political storm over LePage’s dalliances with far-right radicals broke on Monday when Talking Points Memo published a key excerpt from As Maine Went: Governor Paul LePage and the Tea Party Takeover of Maine, a new book from political blogger Mike Tipping of Portland. The post described a series of eight meetings over nine months in 2013 that LePage initiated with members of the Constitutional Coalition, a sovereign citizens group based mostly in the state’s northern reaches.

Among the things reportedly discussed at these meetings was whether or not to seek violent retribution against key political opponents. A Coalition member named Jack McCarthy described the meeting on a radio program hosted by a small group of sovereign citizens calling themselves the Aroostook Watchmen:

We also discussed this there, that as far as I know, the penalty for high treason has not changed in 100 years. And, I did not say it, but the governor said it. I never – I never opened my mouth and said the word. The governor looked at us and looked at his buddy and said they are talking about hanging them.

LePage has vehemently denied that he ever discussed executing anyone, let alone his Democratic opponents, with the group, and a spokesperson characterized the meetings as a benign effort by the governor to listen to people across the political spectrum, saying that LePage has met with “hundreds of Mainers hearing thousands of ideas, concerns and suggestions,” adding that “hearing those ideas during constituent meetings does not translate to the governor endorsing the ideas of others.”

Yet as Tipping’s reportage reveals, LePage was more than a mere willing listener in these meetings. He initiated them after members of the Constitutional Coalition submitted a letter, in the wake of the December 2012 mass shootings at Sandy Hook Elementary in Connecticut, complaining that the governor was violating the Constitution. LePage apparently took umbrage to these accusations and invited the group to a series of meetings.

The topics of these meetings evidently revolved around classic antigovernment “Patriot” movement conspiracy theories, including the belief that American dollars are phony “fiat” money and that the Federal Reserve is a hoax. One of the meetings was dominated by discussion, led by noted conspiracy theorist Michael Coffman, revolving around the notion that the United Nations is out to seize Americans’ private property rights and impose a New World Order environmentalist regime.

It’s unclear why the meetings ended, but as Tipping observes, these sessions constituted more of the governor’s time than he has yet accumulated in office speaking with members of the press.

Moreover, it’s unusual for any person holding public office to hold private meetings with members of radical groups of any stripe, since such sessions are seen as legitimizing these organizations and their politics. Had Gov. LePage held a similar private meeting with leaders of the state’s Ku Klux Klan, for instance – an organization that in reality is not significantly more radical than the Sovereign Citizens  movement – the inappropriateness of the governor’s sponsorship of these sessions would have been only slightly clearer.