A chance encounter earlier this summer with a Border Patrol officer along the Rio Grande has become a disastrous event for the vigilantes prowling the Texas border at the militia encampment dubbed Camp LoneStar. 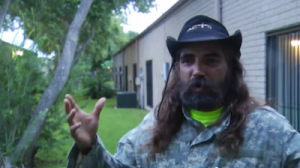 Two of the militiamen, including camp leader Kevin “K.C.” Massey III, now face federal felony weapons charges as a result of the encounter. Massey was arrested on Monday, while a second militiaman, John Frederick Foerster, was arrested on Tuesday. Both are charged with being felons in possession of a weapon.

A group of Border Patrol officers were in pursuit of several illegal border crossers in the early morning hours of Aug. 29 when one of the officers, having lost sight of the fugitives, came upon Foerster, who was standing in the brush holding a weapon. According to the criminal complaint, the agent fired four shots at Foerster and missed; Foerster threw down his gun and surrendered.

While the officers were processing information with Foerster, Massey and another Camp LoneStar participant arrived to vouch for Foerster, carrying weapons. Massey had an AK-47 rifle and a .45 caliber handgun.

According to Massey’s account of the incident on Facebook, Border Patrol officers asked the men to store their guns (as well as a GoPro video camera) in a Patrol vehicle. But when the officers wrapped up their work, they insisted on keeping the guns and the camera as part of their investigation.

The encounter occurred on the private property owned by Cuban “Rusty” Monsees where the Camp LoneStar encampment is set up, and so no arrests were made at the time. However, it shortly emerged that Foerster was in fact a felon; Massey, as federal agents would later report, also had been convicted of a felony in 1988.

On Monday, ATF agents swooped in and arrested Massey at a hotel in Brownsville, and then arrested Foerster on Tuesday.

The arrests set off a round of paranoia among their fellow militiamen. Massey’s “superior” at Camp LoneStar, Archie Seals, ranted on Facebook about how the arrests represent government oppression of their citizen-vigilante efforts:

Ok, I had been thinking for a while, "Are we doing any good here"? Now I know we are, and we are stepping on someone toes. Listen up all Feds that are monitoring, you have put my #2 in a cell illegally thinking it would shut us up and down. Guess what??? It didn't work. We are still open for business, because, "This is what we do". If anything, you made us stronger and more determined. When you take me in on some bs, another has been chosen to take over, then another, and another. We are Camp LoneStar and we are going no where. Now, I need every possible BOG immediately. Let's show these feds that we only will grow stronger. Who will now join me and who will send support for the camp and for KC??? We need supplies here and KC needs funds for bond and lawyer.

These occurrences … should provide adequate warning to patriots, especially those who have a felony record, that there is a concerted effort on the part of government to find cause to bring charges against you and take your guns away. They also provide insight into the tactics that the government is using to cull the patriot community of as many as they can, reducing the remaining numbers, and intimidating those who remain.

Massey’s friends at the Secure Our Border organization changed the cover photo of their Facebook page to one featuring Massey’s portrait, accompanied by the legend: “Taken by the ATF for the crime of proving that the border can be secured by a few American Patriots.”