GLOUCESTER, Va. – Neo-Nazi Erich Gliebe, a former boxer who billed himself in the ring as “The Aryan Barbarian,” took a dive today, publicly forfeiting his title as chairman of the National Alliance (NA), once America’s leading hate group.

After being pummeled for nearly a year by a band of disgruntled former NA members seeking to knock him out of power with a $2 million civil lawsuit, accusing him of “a myriad of instances of malfeasance, misfeasance, illegalities and irregularities,” Gliebe essentially told the Gloucester County Circuit Court judge presiding at a status hearing for the case “no mas” and announced he had quit the neo-Nazi group he has led for 12 years. 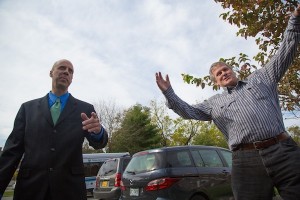 Erich Gliebe (left) and Will Williams outside the courthouse where Gliebe announced his resignation.

“I have resigned all my positions with the National Alliance,” Gliebe told the court, standing at the defense table in a black suit and blue shirt. “I am no longer director or chairman.”

It was, however, a split decision for Gliebe’s bitter courtroom opponents, a gang of six who call themselves the National Alliance Reform & Restoration Group, or NARRG.

While Gliebe stepped down as NARRG had desperately wanted, he handed over control of the West Virginia-based NA not to them but to William (Will) W. Williams, a gray-haired, retired Army Special Forces operator and a former NA official. Williams and Kevin Strom, a broadcast engineer and convicted child porn enthusiast with a long history on the racist right, had been competing with the NARRG Nazis for the keys to what’s left of the evil empire founded by William Pierce, a one-time physics professor and author of The Turner Diaries, the novel that inspired the Oklahoma City bombing. Gliebe took over as the anointed successor to Pierce when he died unexpectedly in 2002.

Gliebe’s announcement and the 66-year-old Williams’ ascension to the tarnished throne seemed to catch NARRG by surprise.

“This is the first time I’ve heard Mr. Gliebe is no longer the chairman,” NARRG’s lawyer, Daniel A. Harvill, told the court.

At one point during the 30-minute hearing, the judge asked Harvill, “What is the nature of this business” the two sides were fighting over?

After the hearing in which Gliebe was ordered to produce membership information and other documents to NARRG, Harvill declined to comment about the lawsuit or Gliebe’s announcement. NARRG’s most prominent members — Jim Ring, a longtime NA unit leader from California who resigned from the group in 2012, and Sanders Pierce, the brother of the founder — were not in the courtroom. The only member of NARRG to appear today was Brian Wilson. He left without comment or any indication whether or not NARGG intended to continue its lawsuit.

But as the two sides filed out of the courtroom, Williams introduced himself to Harvill and Wilson as “Will Williams, the new chairman.”

Gliebe’s announcement ended a tumultuous dozen years since he took the reins of the organization that then had some 1,400 members, 17 full-time salaried national staff members and an income of close to $1 million a year in dues and earnings from its neo-Nazi music label, Resistance Records. Gliebe’s lack of charisma, his authoritarian and ham-handed management style, his fondness for strippers (including his wife, who has since left him), and his financial bungling led to a series of splits, resignations and public attacks on Gliebe by his ostensible followers. The group went from being highly respected by the radical right in the United States and Europe to being something of a joke, with Resistance Records virtually out of business and NA membership down to fewer than 100 people.

The latest blow to Gliebe’s NA came this June, when a Canadian judge struck down a bequest worth an estimated $220,000 that was left to it by a Canadian NA member. That money might have helped put the NA under Gliebe back on track, but the judge ruled that allowing it to go to a neo-Nazi group was a violation of Canadian law and public policy. Gliebe’s lawyer in that case filed an appeal of the verdict that is still pending.

Gliebe resisted calls for his resignation for years, and engaged in a series of maneuvers to keep his enemies from power. But the number of people loyal to him or even willing to abide him as leader kept shrinking. Ring and the others who comprised NARRG, on the other hand, were respected by a great many former NA members, with many seeing Ring as the best candidate for leader. But Williams, known as a hard-liner even on the neo-Nazi scene, was also highly respected among many NA members and others on the radical right.

Outside of the red brick courthouse today, Gliebe told Hatewatch that he resigned to spend more time with his young son. “The best way to care for him is to be out of the Alliance,” he said, adding that he had been thinking about resigning for some time.

Gliebe said he turned over the chairmanship of the Alliance to Williams at the group’s last board meeting but declined to provide any details of the meeting. “I handed the Alliance over to Mr. Williams because I thought he was the best man for the job,” Gliebe said. “I think he’s the most knowledgeable. He’s not a cultist.”

Williams, who was dressed in jeans and a gray shirt, stood next to Gliebe in the Virginia sunshine and told Hatewatch that there was no need for the lawsuit to continue. “Their demand was for Erich Gliebe to step down and put the Alliance under new leadership,” Williams said. “That’s what we’ve done. We’ve met their demands.”