A West Virginia man who authorities say "regularly espouses venomous anti-government, anti-law enforcement rhetoric” was arrested on Valentine’s Day on charges of possessing stolen explosives that he allegedly intended to use in attacks on a federal courthouse, a local festival, and a bank. 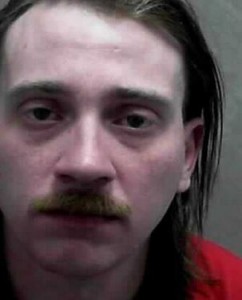 Jonathan Leo Schrader, 30, of Elkins, was arrested by FBI agents on Feb. 14 after a search warrant for his home revealed a bomb cache that included C-4 explosive compound and a half-stick of dynamite.

According to the West Virginia MetroNews, the investigation began when a cooperating witness began alerting sheriff’s deputies to Schrader’s activities, which included obtaining C-4 from a juvenile whose father had used the compound on a job. The witness also told deputies that Schrader had blown up a stump with some of the C-4, had altered an AK-47 to fire automatically, and had left a fake pipe bomb near police barracks in order to gauge their response.

Schrader intended to use the C-4 to blow up the Jennings Randolph Federal Center in Elkins, the witness said, as well as to attack the crowd at the local Mountain State Forest Festival, which is held every fall in the town. On another occasion, Schrader told the man he wanted to blow a hole in the wall of a local bank to get at its money, according to the FBI affidavit.

The man also intended to use a sniper rifle to shoot first responders at the scenes of the explosions, according to the witness, who also regularly relayed information about the man’s hatred of the government and law enforcement.

A detention hearing on Friday in Clarksburg was scheduled by U.S. Magistrate Judge John S. Kaull, who ordered Schrader held in the U.S. Marshals' custody until the hearing. It was not clear if Schrader had an attorney.