Members of the League of the South (LOS), the Republic of Florida Militia (ROF) and student protestors from Florida State University faced off last weekend in front of the Old Capitol Building in Tallahassee, Fla. 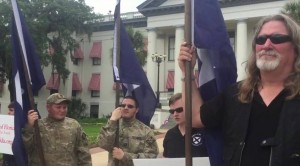 Members of the Republic of Florida, including Jordan Jereb, second from left, join the League of the South's Michael Tubbs, far right, to protest the burning of a Confederate flag by students Florida State University. (Source: Facebook)

Prominent LOS leaders, including Brad Griffin, a key organizer, and Michael Tubbs, LOS chief of staff and an ex-Green Beret who stole weapons and explosives from the U.S. Army for the Ku Klux Klan (KKK) in 1987, stood alongside members of the ROF to protest the school's Students for Democratic Society (SDS) recently burning a Confederate flag to protest increased KKK recruiting in the Tallahassee area. Within days, the League and ROF, led by Jordan Jereb, organized a protest that culminated with a tit-for-tat response –– burning a Soviet flag.

"After talking it over, we decided that we would show up in Tallahassee, confront SDS, tell the communists to get out of Florida, and then spit on, stomp on, and burn the Soviet flag in front of them,” Brad Griffin, who sometimes goes by Hunter Wallace and runs the racist blog Occidental Dissent, wrote.

“A crowd of about 30 spoiled brats, communists, and t------- chanted for a while, shouted some unimaginative slogans, and gave a few speeches about the tyranny of ‘cisgender heteronormative privilege’ while 13 or us starred them down in bemusement while holding Reds Out of Florida Signs” and two flags, the Florida State Flag and the Bonnie Blue Flag," Griffin wrote. "We unfurled the Soviet flag, laid it out before them, and took turns spitting on it, stomping on it, and standing on it underneath our boots."

What seems especially notable about the event is the alliance between ROF and the League, which in recent years has grown more radical despite serious efforts to perfect its public image. While League members are encouraged to wear black polo shirts and khaki pants to public events in order to improve the public perception of the group, clothes can only do so much to make the man.

In fact, the League’s public makeover has proved to be nothing more than a mirage. Despite his desperate wishing for the LOS to become a respected voice in an imaginary struggle for the future of the South, Griffin, one of the standard-bearers for the League’s new image, has brought to the table an angry coalition of misfits and ex-cons – like Jereb and Tubbs.

“I’m angry. I’m full of HATE,” Jereb wrote on Facebook last week. “I’m not gonna lie about it. If there were a few hundred clones of me this system would have quite a situation on its hands. That is really how I feel. Is feeling that way a crime? Maybe. But blacks feel the same way and nobody seems to get mad at them for it.”

Days before that, barely a month after being released from jail on burglary charges, Jereb also professed his love for Molotov cocktails and shared a video that details an argument for when it’s okay to shoot a police officer.

As a convicted felon who can no longer own firearms, Jereb need not worry about shooting anyone, let alone a police officer – a fact he may be coming to terms with if his recent stream of Facebook photos is any indication. Photos of Jereb toting firearms have been replaced by workout selfies with captions such as, “Turning my body into a weapon.”

But perhaps LOSers hanging with criminals isn’t that surprising given recent developments in the organization.

Despite its best attempts to sterilize its vitriolic message, the façade put forth by the LOS continues to crumble.

Members like Jereb demonstrate the realities of its increasingly extreme membership -- a membership that, at the end of the day, spends its free time harassing student organizations under the guise of moral outrage.