"The National Alliance Implodes" was the title of a thread started on the racist Web forum, Stormfront, last Friday directing readers to the SPLC's recent report on the financial problems facing the long-decaying neo-Nazi group. The provocative title and the fact that it was posted by former National Alliance (NA) member James Baker, AKA "Jackboot," the chief of staff of the racist forum, probably guaranteed viewer interest over the Memorial Day weekend.

It's been among the hottest, most-viewed threads on the hate forum for days. With more than 4,000 views within the first 24 hours and more than 10,000 by Sunday night, the majority of Stormfront users are probably now familiar with the allegations of embezzlement and tax fraud made by the NA’S accountant. 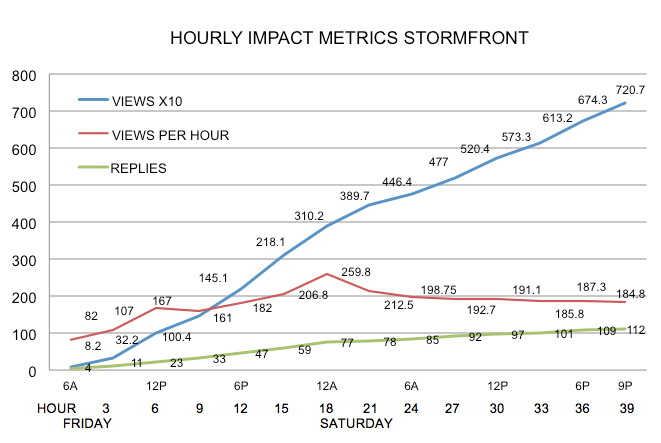 Racists are drawn like flies to movement drama. The above chart illustrates the first 40 hours of traffic on a Stormfront thread discussing last week's SPLC report. Views Per Hour (red line) spiked when Don Black replied, six hours into the discussion and again, when Will Williams responded, 18 hours in, at around midnight Friday night. The contentious thread now has more than 12,500 views.

"I'm surprised Will would have trusted him," Black wrote. "Will had once tried to register Dilloway for our Stormfront Smoky Mountain Summit, but he was understanding when I told him why Dilloway wasn't welcome."

"But it looks like Will did trust him with the keys."

The neo-Nazi Vanguard News Network (VNN) founder, Alex Linder, was even less sympathetic. His scathing remarks about Williams' judgment and excuse making in the aftermath of the SPLC report were posted Saturday. He basically called Williams a liar.

"SPLC says he had unrestricted access to files. Perhaps SPLC is lying. But SPLC has also published an executive flow chart naming most of the top NA people. I don't find Williams' claim plausible," Linder wrote. "The guy lives on site for months, is the only one Williams can find, but he doesn't know anything about current or even recent NA members. How likely is it that what Williams says is true? In my estimation it's unlikely."

"The Employer [me] agrees to employ the Employee [Randolph Lynn Dilloway] as a maintenance/repair. The Employee will be expected to perform the following duties: Building repair, maintenance and cleaning, landscaping as required. Some bookkeeping."

The reference to "some bookkeeping," though minimized in Williams' post, clarifies that Dilloway did indeed have legal access to the organization's books. Williams' denials on Stormfront and in his VNN reply that Dilloway never did any work as a "forensic accountant" for the Alliance also includes his legally foolish admission that there are, in fact, serious financial irregularities with the corporation Williams now heads.

"All of the ‘financial improprieties’ Dilloway ran to SPLC with were from Gliebe’s and Walker’s era, not mine," wrote Williams. "I was charged as Alliance Chairman with sorting the mess out which is exactly what I was doing. Dilloway was not hired as a ‘Forensic Accountant’ to investigate anything, as SPLC claims."

Regardless of Williams' weak denials, the term "forensic accountant" was first used by Williams himself more than three months ago when he described Dilloway's efforts on the compound as a "yeomanly job of forensic accounting."

In a Feb. 11, 2015, email to Dilloway and to his attorney, Timothy Kalamaros, regarding making a criminal complaint against former Alliance business manager, Patrick Martin, Williams also made clear his willingness to inform on Martin to the Internal Revenue Service for "obvious embezzlement."

"Tim, Randolph is doing a yeomanly job of tedious forensic accounting, digging through all that we were left (returns, statements, invoices, etc.). We can't get the Pocahontas DA to go after Martin criminally, but we can make life uncomfortable for him, having to explain his obvious embezzlement of funds to the IRS."

The notion that a self-proclaimed neo-Nazi "leader" would turn in a fellow racist to the IRS further supports the long-held maxim in federal law enforcement that most of the criminal cases made against white supremacists are based on information provided by the racists themselves.

In the same February email Williams clarified he was still using convicted swindler, Thomas Padgett, to do the NA's taxes and would seek to put the blame for the alleged financial fraud on former NA Chairman Shaun Walker and Martin. Williams wrote: "I'll talk again to Tom Padgett again [sic] who I feel will support our efforts to dig out of this IRS crater. He could only file returns from what Martin provided to him.

"We'll try to shield Erich [Gliebe] as best we can and put the theft onto Walker and Martin. Though Erich was irresponsible in not supervising Martin for years." 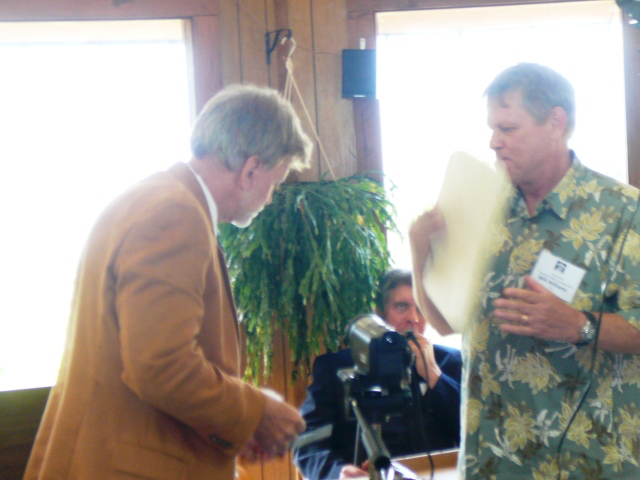 "No Country for Racist Old White Men:" Looking portly and disheveled in an oversized Hawaiian shirt, Will Williams, right, is seen at a secret Stormfront summit meeting with David Duke (left) and Don Black (seated). Williams, who is almost 70-years-old, admits in emails he is "looking for my suitable replacement" and claims he attends these Stormfront meetings to "cherry pick" among the attendees.

Williams is now begging for money, announcing he needs funds to launch a legal case against Dilloway and the SPLC. In a post on Stormfront yesterday, Williams claimed he intended to prosecute his former accountant, claiming, "Not only do I hold an ironclad 8-page Employment Agreement, signed by the thief, containing a page and a half of Non Disclosure Agreement (NDA) clauses which he violated."

Williams seems to be confused about the purpose of an NDA. These common employee contracts are not, and have never been, enough to prevent an employee from reporting criminal wrongdoing.

As noted attorney Jonathan Willens points out on his site, breifworks.com, in a section titled Nondisclosure agreements and retaliation:

"One novel method that attempts to reduce whistleblowing asks employees to sign nondisclosure agreements regarding reporting to outside investigators and regulators. These potentially illegal agreements may require employees to report wrongdoing to supervisors before going outside the organization. Some agreements may theoretically bar employees from benefitting from a whistleblower reward.

Despite his recent attempts to raise money to supposedly take the SPLC to court, "Chairman Williams" has actually had a fairly friendly relationship with the SPLC for more than a year, posing for photographs and cooperating with interviews, both on and off the record and frequently posting articles we've written about him on various hate sites.

Earlier this month, for example, in a May 7 email to an SPLC staff member, Williams stated he had been in contact the night before with Frazier Glenn Miller, who murdered three people at Jewish facilities in Overland Park, Kan., last year. He had arranged for Miller to be interviewed by an SPLC writer and an academic.

Williams wrote, "Glenn call [sic] me last night, oddly enough, and I informed him of your request. He said he'd talk to you and XXXX and will call you, but I have to wait until he calls me again to give him your numbers...We'll see how straight you boys can shoot with a man like FGM who is so universally hated."

"Media Man" for a Mass Murderer

Though Williams' judgment has been repeatedly called in to question for his outspoken support of Miller, he serves as Miller's media contact on the outside. In a post on the Phora last year, Williams admitted he convinced Miller to do an interview with Kansas City Star reporter, Judy Thomas, against Miller's better judgment. Williams wrote:

"He turned down many requests for interviews, but I told him he could trust Judy. He told me he thought she had me ‘snowed,’ but that's not the case at all. So, on my recommendation he talked to her for an hour and 1/2 off the record, then granted the interview on the record, recorded by her."

In the published interview with Thomas, and arranged by Williams, Glenn Miller admitted to the murders at the Kansas Jewish facilities. Although Miller's attorney had adamantly advised against the interview, his life-long "friend" Will Williams made it happen, thus putting a capital murder defendant on trial for his life while having already admitted his crimes to a reporter.

As puzzling as it is to his fellow neo-Nazis, Williams' exploitation of Glenn Miller as some sort of propaganda tool for the racist movement is explicit. In fact, Williams has repeatedly and publicly praised Miller for the killings. He wrote last year,

"He regrets they were not Jews. He assumed they were. He asked one female if she was a Jew; she said no and he gave her a pass -- a sort of ‘passover,’ like when Yah didn't kill Jew babies if their front doors had blood smeared on them.

"It's all relative. When it comes to wasting random Jews one man's hero is another man's ‘piece of shit.’

"Didn't Mr. Miller do his deed on Passover eve? Passover, that celebratory story from the Jew book Exodus where that tribe's god Yahweh killed all the first-born male goyim, sparing Jew kids who were warned by Moses to smear blood on their front doors. That way Yah knew to "pass over" the Jews' houses and kill only the goy first-born males. It's kind of like Santa passing over the houses of bad children on Christmas eve, favoring and leaving gifts only for the children he knows to be good -- kind of like, only different."

"He Just Likes to Fight"

Eventually banned from virtually every racist forum he has ever signed up for, Will Williams' mental health issues and physically abusive reputation as a bully, particularly towards women, goes back decades. He fights females over the slightest provocation and Williams has sued fellow racists and haunted them for years.

Fighting people in the movement defines the NA Chairman's trajectory. Although nowadays, Williams claims he resigned from the National Alliance in 2002 because he did not approve of the group's support of skinhead music, his VNN posts tell a different story. In 2004, Williams admitted on VNN he quit the NA over a conflict with April Gaede, a fellow NA member the group’s founder William Pierce refused to eject from the NA after Williams had a brief and tumultuous affair with her. Williams wrote:

"I'm not inclined to get into the details here of why I resigned from the National Alliance, except to confirm for you that, yes, it concerned the outrageous behavior of Ms. Gaede, a question of her ‘moral character’ or lack thereof."

Williams has been in an ongoing Internet war of words with Gaede ever since—and with many others.

Punctuated by the fights he picks online, everyone who has dealings with Williams knows his often cruel and abusive attitude towards his perceived foes are almost always going to get ugly.

Indeed, in his 374 word post on Stormfront yesterday soliciting funds for a legal case against the SPLC, Williams used the word "fight" five times.

On his Memorial Day Stormfront Radio program Monday, Don Black discussed Williams' caustic behavior and said he would not take sides in the legal dispute between NA and NARRG over the group’s future. And he lamented that racist leaders spend most of their time fighting each other.