Part Internet meme, part scathing social commentary from the right on its leading politicians, there’s a freshly minted term that has spread fast across the radical right. And much to the delight of those who use it, it’s found its way into the political mainstream. 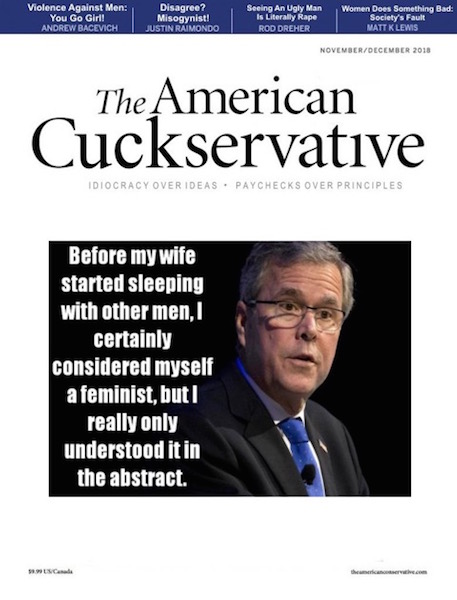 A mock cover of The American Conservative making the rounds on the racist right. Source: The Occidental Observer.

But for the white nationalist movement, the term has come to represent much more – the ultimate insult to a politicians whose interests, they feel, should be closer in line with the mores and values of the ultra-conservative white nationalist right.

“Conservatives should be steamrolling a lame-duck president. Instead, the GOP might as well not exist. Republicans who thought they had retaken the government are confused, angry, and powerless. They worked for Republicans in good faith, but get only scorn and contempt. They’ve been deceived, cheated, and exploited,” writes Gregory Hood at the white nationalist site American Renaissance. “In short, they’ve been ‘c-----,’ or cuckolded.”

It was New York billionaire Donald Trump’s first public appearance among the Republican frontrunners, many of whom have been prominently labeled “c---servatives.” Many white nationalists have thrown their support behind Trump, whose hard-right positions, particularly his extreme stance on immigration and refusal to apologize for anything, no matter how egregious, have created a sharp contrast with his fellow 2016 hopefuls.

Almost immediately Trump became the antithesis of a “c---servative.”

“Donald Trump will probably not save America. He might, in fact, not even believe much of what he is himself saying,” writes Andrew Anglin on his neo-Nazi website The Daily Stormer. “But after his candidacy, voting for the Republican Party will no longer be viewed as a valid way to work for change.”

The origins of the term are unclear. Its first known usage was in a tweet from @Drunknsage, a veteran of last year’s GamerGate controversy. On January 14, 2015, he tweeted at two users, “I've been over using that insult lately c---lord, c---servative, democ--- c--- sucker, list goes on.” The term even has its own hashtag, #c---servative, often used for ultra right conservatives to attack the Republican candidates as being weak or ineffective.

What is certain is that it fermented in the racist depths of the Internet, a rung below even Reddit’s recently deceased /r/CoonTown, on sites like My Posting Career, The Right Stuff, and 4chan’s /pol/, before seeping into civilized discourse.

White supremacists have been more than happy to co-opt the terminology, even tailor its definition to further describe politicians who don’t fall in line with the white nationalist cause.

“C---servatives are one of the reasons why decades of political victories by the Republican Party have never amounted to squat,” Brad Griffin of the white nationalist site Occidental Dissent notes. “Ordinary people vote against abortion, political correctness, or gay marriage and get open borders with Mexico, tax cuts for millionaires, bailouts for Wall Street hedge funds, and job destroying free trade agreements.”

Griffin goes on to describe two more tenets of  “c---servatism”: the embrace of “alien ideals, values or policies” that he claims as his own (Griffin compares this to a cuckolded male raising another man’s children) and a self-loathing love of defeat coupled with a sense of superiority over those who “work in their own interest” (i.e. outspoken white supremacists).

There is another piece to “c---servatism” that, much to the chagrin of some of its most eager peddlers, has been scoured from its definition as it has entered the mainstream political conversation: its anti-Semitic origins. Anglin, for one, is determined to protect this part of the definition. This sentiment has been echoed at the Traditionalist Youth Network website, a white supremacist organization aimed at high school and college age students.

“Every last GOP candidate has its own Cable Rosenberg telling him how to vote, what to say, and how to betray their country,” writes Eric Striker. “Some mild-mannered conservatives have pointed out that mysterious ‘donors’ are indeed the reason why the republicans are constantly selling out their constituents.”

Even longtime anti-Semite and disgraced former college professor Kevin MacDonald of The Occidental Observer has waded into the conversation, siding with Anglin’s efforts to make the term anti-Semitic.

“In general, Jews are not c---servatives because I have yet to see any substantial body of Jews do anything apart from pursuing Jewish ethnic interests as they see them,” MacDonald wrote. “Nobody is cuckolding them, but, given their role as a central component of our hostile elite, they have cuckolded a huge proportion of Whites.”

Not everyone on the racist right has fallen behind the term, however.

Former college professor Andy Nowicki, writing for the white nationalist site Alt-Right, contend that the term “c---servative” is little more than a fad that signifies a “lack of imagination” and “compulsion towards conformity.”

MacDonald disagrees, referencing the widespread popularity of “The Mantra,” a screed written by the white nationalist American Freedom Party’s 2016 presidential candidate, Bob Whitaker, who author of “the mantra.”

“This strategy has been bubbling up from the bottom due ultimately to the internet,” writes MacDonald. “It combines intellectual power with simplicity. Bob Whitaker, who is the presidential candidate for the American Freedom Party, pioneered this strategy with his mantras – simple statements that, unlike the mantras of the establishment, make devastatingly accurate, intellectually unanswerable points: “Asia for the Asians, Africa for the Africans, White countries for everybody!” “Anti-racist is code word for anti-White.”

Whether, as Hood writes, “Beltway operatives” will be forced to make a choice between “reclaim[ing] their dignity and confront[ing] like men the forces that are destroying them” and “sit[ing] in the corner and telling themselves they’re in control,” remains to be seen.