The scene last weekend on the steps of the Idaho state Capitol in Boise was a portrait of America in the wake of the Paris terrorism attacks: On one side, a gathering of interfaith allies voicing their support for refugees from Syria and the plans to help thousands of them resettle in the United States; on the other, a gathering of opponents, many of them clad in black clothing emblazoned with the logo of the antigovernment “III Percent” movement, shouting and chanting their opposition to the program.

The pro-refugee crowd heavily outnumbered the opponents of Syrian resettlement across the street from the steps of the state Capitol in Boise.

The pro-refugee crowd, about 1,000 strong, significantly outdrew those opposed, who numbered just over a hundred – roughly the same turnout the group had achieved three weeks before in Boise in an anti-refugee rally of their own.

"Turning women and children away, cast out of their homes with nothing but the clothes on their back is just not an acceptable thing for us as Americans, you know, champions of liberty, to do," Tara Foster, one of the organizers of the “Rally for Solidarity With Refugees in Idaho,” told the assembled crowd.

A number of speakers stood up during the rally to defend the refugee program. A young Muslim woman named Noora Muhamad, a leader of Boise State University’s Muslim Student Association, explained that she was born in a refugee camp in Turkey to Kurdish parents who had fled Iraq, and that she arrived in the United States as an infant.

"I grew up learning to be open minded and strong and independent," she said.

Across the street, the opponents shouted: “Idaho first! Idaho first!” A couple of the demonstrators yelled: “Go home!”

On the pro-refugee side, demonstrators carried signs reading “Idaho Is Too Great For Hate,” “Refugees Welcome!”, and “Hope, Not Hate.”

Freddy Nyankulinda, a Congolese refugee and BSU student, speaks to the crowd.

“I know how painful, how struggling, how challenging the life of a refugee is,” said Freddy Nyankulinda, a Congolese refugee who is now a student at BSU. “That’s why today I am standing here to (raise) my voice to others who are crying out on the borders.”

He explained to the crowd that, despite the opponents’ concerns about the infiltration of the ranks of refugees by the terrorist factions responsible for the Paris attacks, in reality people from Syria are trying to reach the U.S. not to cause harm, but just to find a safe haven.

“It’s because this nation is the greatest nation among all the nations,” Nyankulinda said. “It’s not just because they’re coming here to take over America, no.”

III Percent of Idaho spokesman Chris McIntire, speaking over a bullhorn as the gathering started, claimed that the opponents weren’t trying to halt all refugees coming to the state, but said that their only real concern was over a supposed lack of security vetting for those refugees.

““Those on the other side need to understand this is not about hate. This is not about being against the humanitarian effort. We need refugees in this country, but we need them to be verified and we need it to be legal,” McIntire said.

One of the signs opposing the refugee resettlement program in Idaho.

However, there were voices that belied the III Percent leaders' protestations. One man –– apparently accompanied by two young flag-waving boys –– shouted: "Hey, while you're teaching your kids to play with everybody else, they're teaching their kids to kill yours! Remember that!"

There were also a number of demonstrators on the opposing side carrying hateful signs. “Ban Islam! Deport All Muslims,” said one of the signs. 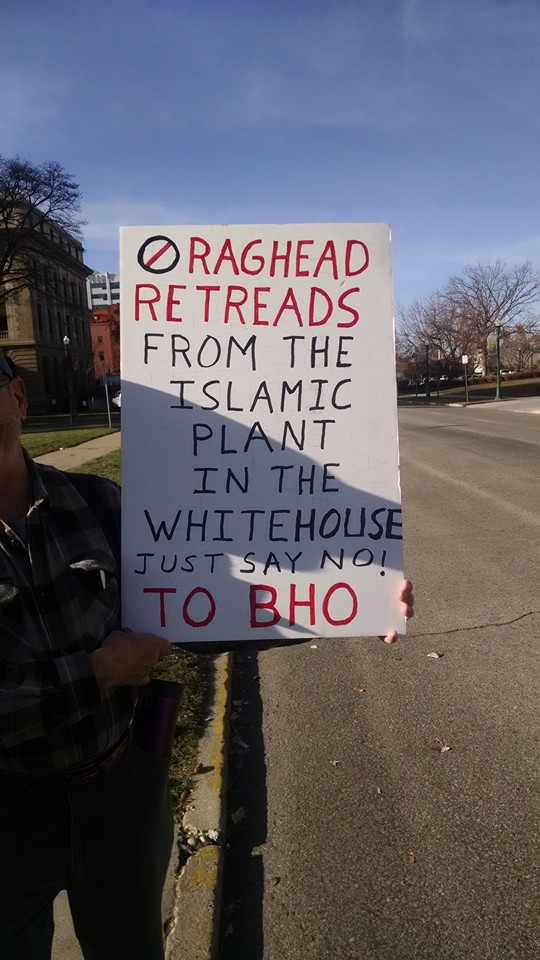 “R------ Retreads From The Islamic Plant In The White House – Just Say No! To BHO,” read another.

A number of the signs carried by the opponents carried the logo of ACT! For America, the extremist anti-Muslim group headed up by Brigitte Gabriel. Among the claims promoted by that group is the notion that the Obama administration has been infiltrated at the highest level by radical Islamists.

Towards the end of the rally, there were some brief moments where the two sides came together, as members of the pro-refugee side crossed the street and exchanged hugs with some of their opponents. Both McIntire and III Percent of Idaho president Brandon Curtiss exchanged greetings and even a hug with refugee supporters.

However, the moment quickly turned sour as some of the anti-refugee protesters began shouting at the people who came to talk to them.

One man wearing a U.S. Army jacket, who had been flipping off the pro-refugee side throughout the rally, began screaming at the people who approached him to talk, and at one point reached over to grab the head of a woman speaking to him, at which point police intervened and separated them.

The man continued shouting at the refugees’ defenders. “Hey, go back to your candy-cane, candy clowns, unicorn, kumbayah world, where you’ve got not life experience!”

“We don’t want to shake hands with people who are selling America out,” declared a woman with a bullhorn standing nearby. “Don’t you get it? We love our country!”

“So do we!” replied one of the refugee supporters who had approached them. “You only shake hands with people you agree with?”

Despite the continued attempts at rapprochement, the conversation at the park across from the Capitol continued along this ugly route. Eventually, the crowd broke up after Boise police ran a phalanx down the boulevard in front of the Capitol to clear the streets, and there were no further incidents.

Supporters of the refugees carried a wide variety of signs.

The controversy over refugee resettlement in Idaho has been focused in recent months over the plans by the refugee resettlement program to bring a number of Syrian refugees to the rural farming town of Twin Falls. The militiamen of the “III Percent” movement became involved in the issue in October, and their anger was on display earlier this month in a rally the group held on the Capitol steps, which was similarly met by pro-refugee counter-protesters.

Much of the dispute is based on misinformation, including the extremists’ claims that the refugees are poorly vetted. In reality, refugees are subjected to the heaviest scrutiny of any persons seeking to enter the United States, including multiple rounds of high-level security checks.

The controversy reflects a tide of anti-Muslim hatred that has been rising in the United States in recent weeks, fueled in part by Islamophobic rhetoric used by several GOP presidential candidates. That culminated in candidate Donald Trump announcing that if he were elected, he would tell the Syrian refugees: “They’re going back!”

Those sentiments, however, gained real traction in the media and in the political world when it emerged that one of the killers involved in Friday’s Paris massacres was believed to have carried a Syrian refugee passport, suggesting that he had wormed his way into France among the tide of refugees hitting much of Europe in the wake of attacks by Islamic State (ISIS) forces in Syria. (It later emerged that the passport was only found near the attacker, and European authorities so far insist that all the attackers were European nationals.)

Nonetheless, the initial reports set off alarm bells in states where the anti-refugee campaign was already gaining momentum –– notably such states as Alabama, Michigan, Florida and Idaho –– and eventually induced 26 Republican governors (as well as the Democratic governor of  New Hampshire) to announce on Monday that they were halting the further influx of refugees within their respective states. They too claimed they feared the refugees might allow terrorists to come to the United States.

Federal authorities indeed have identified gaps in the ability to complete background checks on Syrian refugees, but despite coverage from right-wing media suggesting that they pose a security risk, the reality is that these refugees will receive an extraordinary amount of screening before entering the U.S. relocation program. One study found that while the concerns about terrorism might be legitimate, the reasons for fear are wildly exaggerated, and in fact only fuel the potential for real terrorism further down the road.