Zeze Rwasama, the director of College of Southern (CSI) Idaho’s refugee relocation center, has to shake his head at the firestorm that has erupted over his program in the farming town of Twin Falls, Idaho.

“These people, they are working from false information,” he says ruefully. “All we can do is tell people the facts and hope they listen.”

For more than 30 years, CSI has hosted a refugee relocation center tucked away on its Twin Falls campus, lending a hand to people from around the world uprooted by political violence and other upheavals. And for most of those years, it has gone about its work quietly, placing the refugees in jobs and living arrangements and helping them get educations and, often, become American citizens, with little controversy.

So it came as something of a shock to the people running the center this summer when a group of far-right local citizens – fueled by paranoid fears of the looming imposition of “Sharia law” and the spread of ISIS-affiliated terrorism – began organizing against its operations, demanding that the college divest itself of the program and petitioning the governor of Idaho to cease all refugee-relocation programs in the state.

The group, organized as the Committee to End the CSI Refugee Center, began showing up at CSI board meetings in June to demand the center be closed, spurred by the announcement in April that refugees from Syria would soon be among those being processed by the center. 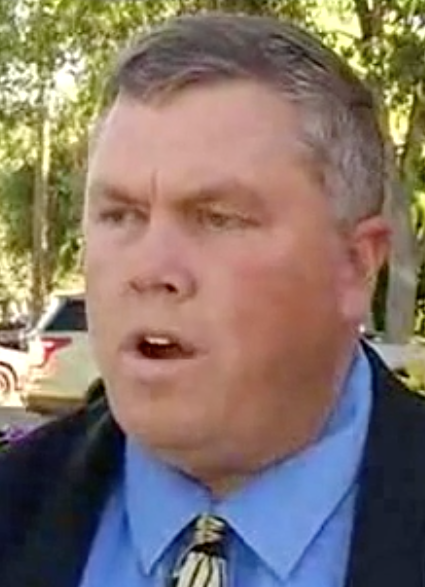 "Bringing in Syrians, who are predominantly of Muslim background, may be opening the door to terrorists pretending to be refugees," said Rick Martin, a conservative political activist from the nearby town of Buhl, who heads up the committee.

"We're not against legitimate refugees. They need to be treated with dignity and respect. But it would be easy for someone to lie about their background," he added.

The group tried in August to put a measure on the Twin Falls County spring ballot to have the center banned from the CSI campus, but the county attorney declined to allow it, saying it was blatantly unconstitutional. The group last week filed a second petition, claiming its new language resolved the problems, but the county attorney again indicated that it would have problems clearing the legal hurdles.

The committee has remained undaunted, opening an online petition pleading with the CSI board to shut down the program. The petition claims that elsewhere, “refugee resettlement has resulted in a pattern of horrific sex crimes,” and that in Boise, it “has resulted in an increase in terrorist activity,” while “every dollar spent assimilating a single extended family of refugees is a dollar that could be spent making their home country more livable for all their countrymen.”

Another petition, directed at Gov. Butch Otter, garnered over 200 signatures at Change.org, urging that all refugee programs in the state be shut down: “If this reverse colonization of our country continues, there won't be a future for American Families,” it stated.

Petition signers made clear their thinking: “To hell with the humanitarian effort. We are at war with these people,” said one. “These refugees are a threat to my family, my way of life, and my country,” wrote another.

The issue has received considerable play on local right-wing radio talk shows, where the notion of Sharia law being imposed in America was described as a concrete reality, rather than the misinformation-driven fantasy that it is.

Martin and his committee also put together a website, Magic Valley Refugee Watch, that provides links to a number of articles and videos denouncing refugee resettlement, particularly for people fleeing the war in Syria.

The top link on the page directs readers to a video featuring anti-Muslim zealot Ann Corcoran, who explains that these refugees include would-be terrorists and “Islamic supremacists.” Corcoran, a Maryland activist has solidified her relationships with some of the major anti-Muslim groups in the country over the past year as they have increased their anti-refugee activism. She has been courted by Frank Gaffney’s Center for Security Policy  “think tank” and Brigitte Gabriel’s ACT! for America, the largest grassroots anti-Muslim group in the country. Corcoran’s Refugee Resettlement Watch blog has highlighted Rick Martin’s anti-refugee efforts in Idaho as part of her push to mobilize what she calls “pockets of resistance” against refugee resettlement nationwide.

Another link directs readers to an extended screed against the CSI program, claiming that “ISIS terrorists have indicated they will use the refugee program to bring in their Jihadists” and that their medical screening is inadequate: “Many diseases including drug resistant tuberculosis, leprosy and other diseases have been brought in with legal immigration & illegal aliens,” it says.

At CSI trustee meetings, the activists have been similarly outspoken. One claimed that Muslims have stated a goal of ruling the world and killing those who don’t subscribe to Islam.

“Like oil and water, U.S. culture and the Mohammedan mindset do not mix. The machetes, pressure-cooker bombs, ‘honor’ killings and 747s that have killed so many Americans should remind us of this unfortunate fact,” opined a letter writer to the local Times-News. “Let’s not fund our own demise by importing even one person who means to destroy us.”

Right-wing commentary in Idaho has been even more openly extreme. At The Voice of Idaho, one writer opined: “By this point, anybody who doesn’t recognize that our country is being invaded in a mass migration facilitated by Communist United Nations operatives – and that includes the Obamanation is either willfully ignorant or invincibly stupid.  Either way, it’s time to get serious and recognize it for what it is because they are endangering our families, our way of life, and our country.”

A white nationalist organization, the American Freedom Party – which recently began increasing its visibility and presence in the Pacific Northwest – inserted itself into the discussion by phoning out a prerecorded message to Idahoans urging them to voice their outrage over the “thousands of Muslim refugees headed to Idaho.” The message went on to inform that the “non-white invasion of their state and all white areas constitutes white genocide.”

AFP chairman William Johnson was unrepentant about the blanket nature of the robocall, which left many of its recipients irate. “Some people don’t like it, well that’s too bad,” Johnson told the Idaho Statesman. "We don’t like the direction this country’s taken. They can sit through a 45-second harangue by our party telling them why the white race is dying out.”

Along with the ugly rhetoric, there has been some ugly behavior directed at Muslims in the program since the group began organizing. Leo Morales, director of the Idaho chapter of the ACLU, told Hatewatch that in at least one case, a woman wearing a headscarf was harassed at the store where she worked as a clerk by people demanding to know if she was Muslim.

“They started in with the ugly stuff: ‘You don’t belong in my country, you need to leave my country.’ And then also finished with, ‘I am gonna come back next week, and if you’re still here, things are gonna be … different,’” Morales said. “So the young girl was scared, really scared. And she eventually shared this with her teacher.”

Other young people have been harassed as well. A teacher at a local school where some of the refugees attend class told activist Deborah Silver that one day, a pickup truck with a large Confederate flag hanging off the back showed up one day as school was letting out, “and there was some concern there. So they did remove the kids from the road and notify the police that someone was hanging around there. I’ve also heard reports from a couple of teachers at CSI that a couple of the Muslim girls, wearing headscarves, were approached on their way to school.”

Even more unsettling, a group of Boise-area militiamen who call themselves the “Idaho III Percent” have begun showing up at some of the CSI board meetings to register their displeasure with the program. The group, headed by Boise resident Brandon Curtiss, has posted attacks on the refugee program on its Facebook page, while Curtiss is also listed as a member of Martin’s committee.

As Morales noted, “that sort of environment is one that’s very traumatizing for the refugee community.”

Contributing to the turmoil has been the arrival of a noted anti-Muslim activist, Shahram Hadian, currently the pastor of a Christian church in northern Idaho, and known for labeling all of Islam “demonic.” Hadian made headlines last year by playing a key role in a fight in the Idaho Legislature over funding for child-support enforcement services.  In the Magic Valley, he jumped into the debate over the refugee center by demanding that it be closed.

"The refugee program needs to be halted. So what I said was immigration, lawful immigration needs to be limited, particularly from Muslim countries," Hadian said.

Rwasama observed that nearly all of the fearmongering has been based on false information and distorted perceptions. It’s very difficult to even achieve refugee status, and the people who arrive in Twin Falls have all been carefully screened, he said.

There has been pushback against the fearmongering. Silver, a longtime Twin Falls resident and local accountant, formed her own organization, Magic Valley Refugee Advocates, in response to the agitation. “I just knew from experience what the center did and how they went about it, and I knew that what these people were saying was wrong,” she said.

“The thing is, most of the people who know about the refugee center support what it does,” Silver said. “The businesses do; our unemployment rate is under 4 percent, so our philosophy is, you put them right to work right away with a job here. And so the businesses are very supportive.”

One of the more interesting expressions of support has come from a local evangelical Christian named Jennifer Thornquest, who has taken to standing out on the Perrine Bridge – the huge span across the Snake River Canyon that welcomes visitors to Twin Falls – with a sign showing her support for the refugees.

“I wanted something tangible to do to help the people in Syria,” Thornquest said, adding that it gets “very lonely” out there. On her blog, she has described some of the ugliness that is directed her way from passing drivers, while at other times the shows of support she receives can be uplifting.

“The vast majority of people in the Magic Valley area are very supportive of what we are doing,” Rwasama said. “What’s happening is that with technology now, one person can multiply one voice into hundreds. They are very committed to spending more time to broadcast their opinions, but they are just a minority.

“We’ve actually seen an increase in the number of people who are coming to volunteer here, and people making donations as well. This has raised awareness in the community, and now people are coming out and supporting us.”

Still, as Silver noted, the volume of noise from the Islamophobic contingent has been overwhelming: “They’re calling all these elected officials – the mayor, the trustees, the city council – and they’re getting a ton of these calls,” she said.

“They’re getting traction, and that’s what’s scaring me,” Silver said, on the eve of a community forum on the subject sponsored by the Times-News. “I’m working on community involvement, and we are reaching out to faith leaders in the area. And we’re getting a very good response with that. But there’s so much chatter going on, it’s making the atmosphere very crazy.”

Silver observed that the noise being made by the extremists is distorting the shape of the discourse. “These kinds of characters are going to scare away normal people, and so only their crowd is going to show up, and pretty soon that’s who we’re electing, because nobody else wants to talk to them,” she said.