Neo-Nazis advertised a white-power rock show to be followed by a march into gay neighborhood, but they never showed up to face the hundreds who turned out to protest their plans.

Maybe it was the rain, which came down in buckets all day Sunday in Seattle.

Or maybe it was the massive crowd of over 500 people, a large number of them black-clad and masked anarchists, waiting to greet them up in the city’s Capitol Hill neighborhood.

Or maybe, as the white supremacists who took part in this year’s “Martyrs [sic] Day” commemoration in western Washington tried to claim afterward, it was all just a hoax, a massive prank meant to tweak Seattle liberals.

Whatever the cause, the contingent of neo-Nazi skinheads who boasted beforehand that “we will be marching through Capitol Hill in Seattle to show these liberals, anarchists antifa and f--- that we are here and here to stay” after a day of listening to white-power bands, in reality turned out to be complete no-shows Sunday as far as any kind of public appearance.

The same could not be said of their opponents, who significantly outnumbered them in any event. The anti-Nazi protesters blocked traffic and created a scene in the neighborhood; there were reports of minor vandalism attributed to the presence of anarchists. The black-clad and masked young men remained in clusters around the neighborhood well after the march, waiting for someone to show.

Organizers from the Northwest Hammerskins, a well-known racist skinhead outfit, had posted on the white-supremacist website Stormfront their plans for this year’s version of “Martyrs Day,” held annually on Dec. 6, usually on Whidbey Island, to commemorate the death of Robert Mathews, leader of the neo-Nazi criminal gang The Order, at the hands of the FBI in 1984. This year, they vowed in the posts, they planned to hold it in the form of a white-power rock concert in the Seattle neighborhood of Ballard, followed by a cross burning, and then a march up to Capitol Hill.

A woman (using the nom de plume “Hardcore Honey”) associated with Northwest skinheads posted that this year’s event would be “something you will NOT want to miss!” She also included a poster of the planned concert. 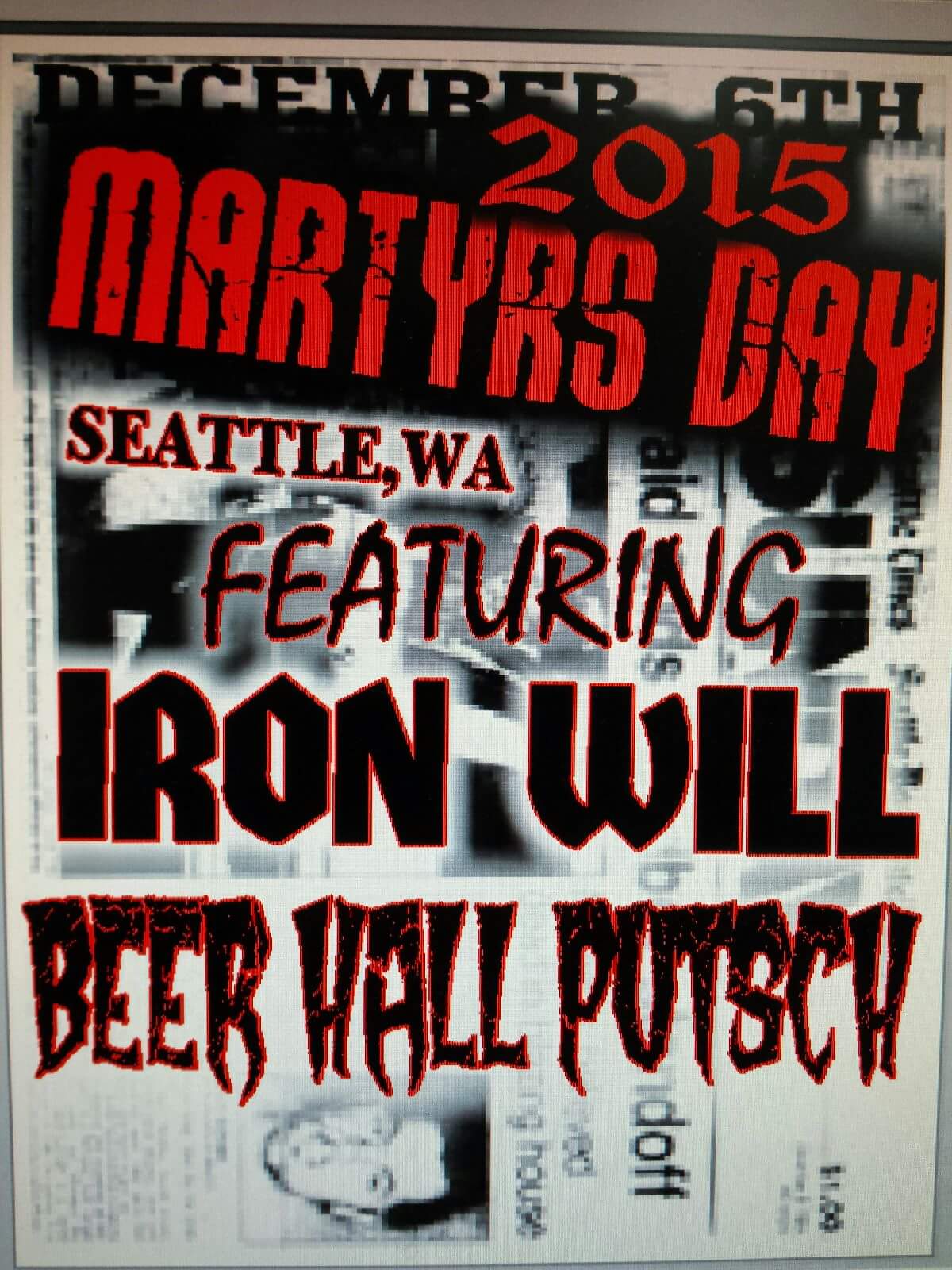 The flyer advertising the white-power concert in Seattle.

"Join us Sunday, Dec. 6th in Ballard,WA. We will be meeting up at an undisclosed location in Ballard …

"The event will present five white power bands including Ironwill and Beer Hall Putsch and a couple others making their NW debuts. Comrades and crews from across the country will be in attendance and about 300 people are to be expected for a day of comraderie, music, hailing our heroes and good ol' goosestepping. Food and drinks will also be provided.

"After the bands and a traditional cross burning we will be marching through Capitol Hill in Seattle to show these liberals, anarchists antifa and f--- that we are here and here to stay.

"This will be the biggest event in NW history as of yet so let's put the beautiful Pacific Northwest back on the map and make Robert Mathews proud!"

That set off a flurry of activity by anti-fascists and socialists in the region, who organized a large rally Sunday in Capitol Hill intended to make the neo-Nazis feel unwelcome. By the time darkness had fallen on Seattle – along with the heavy rains – a crowd estimated at over 500 had collected at Cal Anderson Park, in the heart of the district.

Capitol Hill, as the city’s most prominent gay neighborhood, also has a long and unfortunate history of attracting anti-LGBT hate-crimes from outside the area. The problem dates back to at least 1990, when a group of neo-Nazis from northern Idaho came to Seattle intent on setting off a series of pipe bombs inside Neighbours, a popular gay nightclub in the area (those men were arrested before enacting their plot and wound up serving federal prison time).

Organizers of the rally included Rose City Antifa, a Portland, Ore.-based antifascist group, who spread the word about the skinheads’ intentions through social media, using the hashtag #DefendSeattle. Soon a number of socialist and feminist organizations, as well as some anarchist groups, had joined in, and on Sunday, they made their numbers known. As the evening darkened and the rain grew heavier, the crowd headed out from the park and marched down Broadway, the main avenue on Capitol Hill.

Many carried handmade signs: “Nazis Go Home” and “Skinhead Fascists Not Welcome Here,” were fairly typical. A big banner read: “Smash White Supremacy.” Some signs even had a sense of humor: “Thor Hates You,” read one.

Chanting various anti-Nazi slogans – “Nazis are not welcome here,” and “Nazis out, refugees in” were favorites – the crowd traveled down about five city blocks, then circled back around to the park where the march started, at which time police ordered them to disperse, and they did.

A news van for KIRO-TV was vandalized by some of the masked young men – several windows were broken in the van, and it had been tagged with graffiti. Other graffiti had been left behind: “F--- Against Nazis” read one tag that had been hastily painted across a stark white building wall. And some business owners reported having their windows broken as well.

On Monday morning, one of the skinheads boasted on the #DefendSeattle Facebook page that it had all been a prank:

Lol. Well I hope you nerds enjoyed the hoax played on you by us idiot boneheads. Our memorial went off with no problems yesterday. All you revolutionaries managed to do was to vandalize the city you say you where defending. You've also managed to expose yourselves and now we have lots of info on people who try desperately too hide their identities. Places of work, your residents, and places of leisure may no longer be a safe space. So much for outsmarting us idiotic boneheads. Playing Che can be a lot of fun, but it's time to realize that you really are a bunch of white nerds who live in all white neighborhoods from middle class white families. None of you are oppressed, unless you count your drug addiction and low iqs oppression. Funny how you guys where at the SPD earlier before your rally. Making sure they where there to keep you safe lol. Fight the system man. Well thanks for the laugh, in solidarity, antifa hahaha.

In reality, the skinheads had indeed held their usual commemoration on Whidbey Island earlier in the day Sunday, but had in fact subsequently also gathered at a Seattle-area private residence at which a few dozen neo-Nazis were treated to a white-power rock show by a couple of white-power bands, according to information received by the SPLC. The show ended in the early evening and the participants did not, apparently, make the trek to Capitol Hill.

No doubt it was the rain.