In keeping with a long history of cozying up to the extremist radical right, the Conservative Political Action Conference opened Thursday with a host of panels bashing Islam.

The panels –– with titles such as "The Global Jihad Movement in America and the Counterjihad Campaign” and “Fighting for Victory Against Radical Islamism” –– featured prominent anti-Muslim hate groups and a number of anti-Muslim activists from around the globe.

Iowa Rep. Steve King, a close friend of the anti-Muslim and anti-immigrant movements, told the CPAC crowd at the “Fighting for Victory Against Radical Islamism” panel that a secure border would “secure the demographics of America so we can decide and let the American people determine what America is like in a generation or two or three.”

Speaking on the same panel, Jim Hanson, vice president of the anti-Muslim hate group Center for Security Policy (CSP) claimed that school children learning an Islamic prayer in American schools is part of the Muslim Brotherhood’s plans to take over America from within. Later in his speech, Hanson attacked President Obama, stating, “He’s not a Muslim, I don’t believe, but he aligns with that worldview far too much.”

Also on the panel was Ayaan Hirsi Ali, a very vocal anti-Muslim activist, and former member of the Dutch parliament, who lamented restrictions in condemning Islam, stating, “We need to have to force them to call a spade a spade, Islam is a not a religion of peace.” 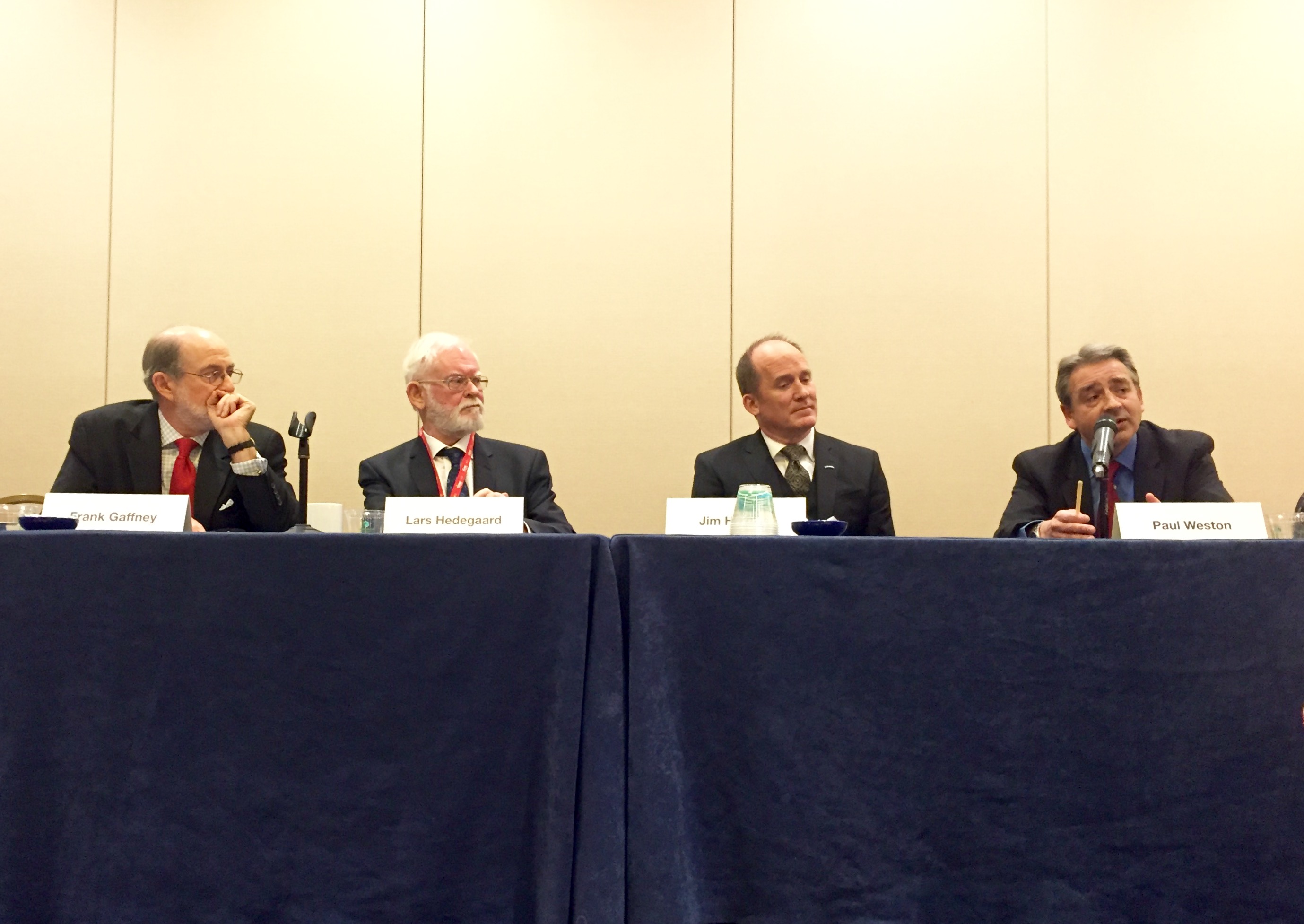 "The Global Jihad Movement in America and the Counterjihad Campaign,” a panel sponsored by CSP and moderated by CSP founder Frank Gaffney, featured Lars Hedegaard, a Danish anti-Muslim activist. Hedegaard is the founder of the International Free Press Society (IFPS), an anti-Muslim coalition that has worked closely with anti-Muslim Dutch politician Geert Wilders and CSP.

In his comments, Hedegaard reinforced the idea of so called “no-go zones” in Europe, claiming there are cities in Denmark “where police dare not operate unless they come in force, where the fire brigade cannot come unless it’s under police protection, and where law and order does not exist.” He added that changing demographics in Europe “will end in breakdown, this will end in warfare, this will end in bloodshed,” he said.

Weston began by blaming the “preaching” of feminist groups for a decline in birthrates from English couples. He went on to lament that the average English woman, “if she can be bothered to have a child at all, is in her mid 30s or early 40s.” Weston went on to talk about the increase in the Muslim population in the UK, claiming that most of Britain’s Muslims are under the age of 15, “which is the future breeding age, to put it bluntly, and the future fighting age.”

Weston echoed Hedegaard’s comments. “Britain can still maybe do something about this, but I don’t think it will be resolved peacefully. I think we probably we are going to be looking at civil war scenario in the same way that Yugoslavia broke up in the 1990s and the civil war in Lebanon in the 1970s,” he said. “It’s going to be cataclysmic, something that people cannot imagine really living in modern democratic times. But it’s coming.”

During a question-and-answer session, Weston called for the government to close mosques in Britain that “are practicing sedition and subversion” and even called for increased surveillance and law enforcement raids of mosques to “check them out for weapons that they are smuggling in.”

Also during that Q&A session, Frank Gaffney discussed the Syrian refugee crisis and questioned whether the Obama administration has an “affinity” for the Muslim brotherhood. Gaffney also continued to promote the idea that U.S. officials are submitting to the will of the Muslim Brotherhood.

Check back later for more Hatewatch coverage of CPAC 2016.