An anti-trans "bathroom bill" passed in North Carolina is churning up something of a national outcry. And now it seems the anti-LGBT Liberty Counsel, which defended Kentucky clerk Kim Davis, is ready to step into the mix and defend the state.

Since March 23, when North Carolina governor Pat McCrory signed a controversial bill blocking cities from allowing transgender individuals from using public bathrooms for their identified gender, the outcry over the bill has garnered national attention.

Ninety prominent business leaders signed a letter calling for a full repeal of HB-2, the Public Facilities Privacy and Security Act. Among the companies they represent are Apple, IBM, Starwood Hotels, Intel, Miramax, Google Ventures, American Airlines, Citibank, AirBnB, Levi Strauss, and Bank of America. Other companies, like Dow and Biogen, have made their opposition to the bill public on social media.

Meanwhile, the mayors of Seattle, San Francisco, and New York City — along with the governor of New York — have banned publicly funded employee travel to North Carolina.

Amidst the very public outcry, the American Civil Liberties Union of North Carolina, Lambda Legal, and Equality North Carolina filed a federal lawsuit against North Carolina because of the bill’s targeting of transgender individuals, especially with regard to bathrooms.

Given the very public nature of this battle, it was probably only a matter of time before the anti-LGBT hate group Liberty Counsel got involved

On March 30, the Liberty Counsel posted a letter announcing it had written to North Carolina Speaker of the House Tim Moore and President Pro Tempore Phil Berger in which it stated that it “hereby offers its services as a pro bono public interest law firm in defense of the Act.” The letter went on to comment on the “disturbing commentary on modern legal ethics” demonstrated by attorney general Roy Cooper, who has refused to defend the state in the lawsuit, calling the law “a national embarrassment” that “will set North Carolina’s economy back if we don’t repeal it.”

The Liberty Counsel, which famously called for disobeying the Supreme Court’s decisions and defended Kentucky clerk Kim Davis, who refused to issue same-sex marriage licenses, brings with it a ugly history of misstatements and ugly anti-LGBT rhetoric. 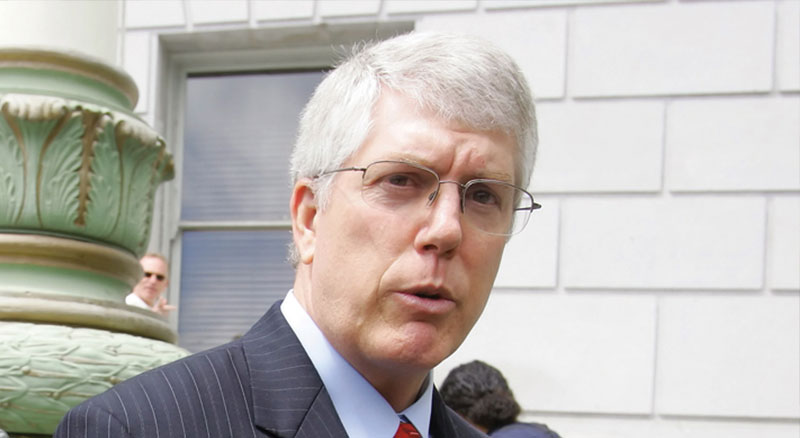 During the Davis battle, for example, the Liberty Counsel made several claims that were disproven, including that Davis had a private meeting with the Pope and that a massive prayer rally for her was held in Peru . Mathew “Mat” Staver, the director of the Liberty Counsel, also falsely claimed that hosts of the TV show “The View” had called for killing Kim Davis. The Liberty Counsel issued a correction with regard to “The View,” and admitted that the photo they used in the Peru claim was not what they had thought, but they blamed a Peruvian congressman for the photo.

Staver, who has often linked homosexuality to pedophilia, once said that the trans-friendly policy of Macy’s department stores could lead to an increase in rape and sexual assaults of women in fitting rooms. A 2015 Liberty Counsel press release stated that:

The push for transgender rights is all a part of the homosexual agenda to create sexual anarchy in order to destroy marriage, morality, and objective truth.

The Liberty Counsel has also been involved in a push to keep LGBT materials out of schools. Last year, it threatened a lawsuit against a Wisconsin school district for assigning a book called I Am Jazz, about a real-life transgender child’s experience.

Despite children being allowed to skip the reading and discussion of the book if their parents wished, the Liberty Counsel threatened a lawsuit to prevent all of Wisconsin’s schools from assigning the book.

In December 2015, the Liberty Counsel filed a lawsuit against the inclusion of sexual orientation and gender identity in the Fairfax County, Va., School District’s anti-discrimination policy. The suit was dismissed the following year, but the group has appealed.

Three months later, in February, Brevard County, Fla., killed a proposed non-discrimination and equal employment policy for LGBT people in the public schools. Liberty Counsel was involved in that battle, too. The group emailed a letter to the school board chairman prior to the vote that included warnings about “boys and men claiming a female ‘gender identity’ to enter and use the restrooms, locker rooms, and other areas previously affording privacy to girls and women.”

With such a history of legal entanglements, North Carolina’s new law seems tailor-made to draw the Liberty Counsel’s interest.

The bill—introduced and passed in less than ten hours during a hastily convened special session of the state legislature—revokes and bans any LGBT protection measures in the state. It specifically targeted the city of Charlotte’s ordinance, just passed in February, which allowed transgender individuals to use public bathrooms in accordance with their gender identities.

The new measure was slated to go into effect April 1, but the state legislature convened the special session to prevent that. Senate Democrats walked out in protest, claiming they had not been allowed to participate in the bill’s process. “We witnessed an affront to democracy,” Sen. Dan Blue, D-Raleigh, the minority leader, said.

The new law overturns Charlotte’s ordinance and prevents any local governments from passing their own non-discrimination ordinances. It also mandates that students in the state’s schools use bathrooms corresponding to the gender listed on their birth certificates, playing on fears that male predators will pretend to be women or trans women and sneak into women’s restrooms or locker rooms to accost or molest women and girls.

The bill includes a few other provisions, including preventing any city in the state from enacting minimum wage bills higher, and it guts workplace discrimination protections overall, removing the right of employees to sue on the basis of discrimination in state courts. Employees now have to file federal lawsuits, which involve a different process often with shorter statutes of limitations and higher fees.

But the overwhelming issue remains the denial of access to public bathroom facilities for trans people and the removal of sexual orientation and gender identity from non-discrimination policies.

The rhetoric behind these so-called “bathroom bills” relies on generating fear and drumming up support behind the fictitious worry of men sneaking into women’s restrooms  –– a myth perpetuated in anti-LGBT circles. The rhetoric was effective last fall, when Houston voters repealed a non-discrimination ordinance that included sexual orientation and gender identity. Such rhetoric continues to fuel anti-trans “bathroom bills” in schools and legislatures.

Media Matters noted that the text of the North Carolina bill may have come from some of the anti-trans school policies that anti-LGBT group Alliance Defending Freedom (ADF) has been pushing for over a year.

ADF, which praised the passage of the North Carolina law, is an organization devoted to initiating right-wing legal challenges to things considered “against religious liberty.” In the past, it has emailed public school districts across the country to “advise” them of its recommended “Student Physical Privacy” policy. Last year, ADF released a model state-level bill that would prohibit all public school transgender students from using any facility in accordance with their gender identity. Media Matters noted that Nevada, Minnesota, Kentucky, Wisconsin and Texas have all proposed versions of ADF’s bill.

ADF has been involved at least peripherally in anti-LGBT battles in North Carolina for over a year. Tami Fitzgerald, executive director of the North Carolina Values Coalition, was the lead anti-LGBT activist who opposed the Charlotte ordinance and was one of the major forces behind North Carolina’s 2012 amendment to ban marriage equality. Her bio at the Conservative Pundit notes that she is an ADF allied attorney.