While some organizers behind pro-confederate rallies describe their demonstrations as peaceful gatherings to celebrate “heritage not hate,” that's not the case with the Rock Stone Mountain Rally planned later this month. This rally, described as a “pro-white march,” is being organized by an avowed neo-Nazi and convicted felon. 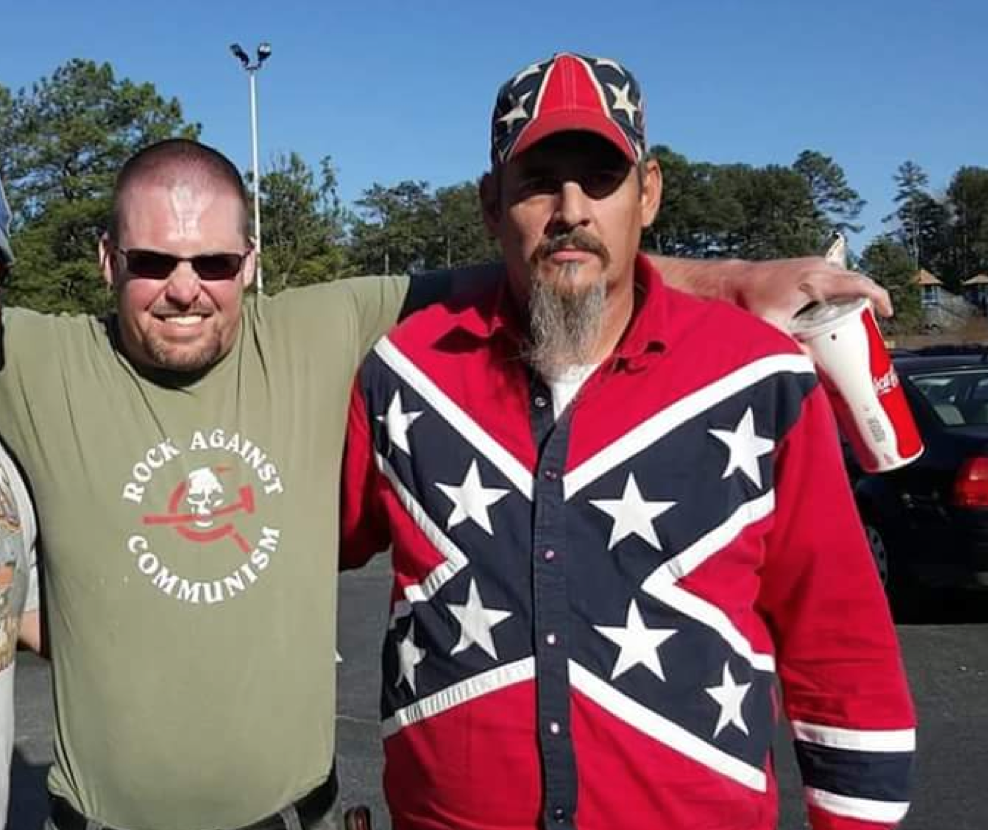 John Michael Estes, left, with Greg Calhoun, a supporter of the International Keystone Knights of the Ku Klux Klan. (Facebook.)

One of the organizers, John Michael Estes of metro-Atlanta, has been in and out of prison for nearly 10 years. As early as 1996, Estes’ convictions range from obstructing a law enforcement officer, aggravated stalking, shoplifting, reckless driving and fleeing/eluding police.

Estes is also a devout racist, posting white supremacist rants on his Facebook profiles over the last two years.

“Race transcends borders and languages. We must unite and conquer Our [sic] common foes,” Estes wrote on his Facebook wall in 2013.

“Once the K----Jew has been b-----slapped back into his place and Our lands are clean of those that are not Us-then we can settle these other issues amongst Ourselves,” he said in another post. He has also referred to Judaism as a disease, claiming the religion “can infest the soul of any, and therefore can not be combatted solely as a race.”

Billy Roper of Arkansas, the other leader behind Rock Stone Mountain, is the neo-Nazi leader who created the now defunct group White Revolution in 2002--a coalition, of sorts, filled with neo-Nazis and Christian Identity adherents. Roper has a reputation of bouncing between white supremacist groups, and writing racist novels in his spare time, including his trilogy Hasten the Day, a nonfiction series about “Race riots and secessions [that] lead to ethnic cleansing and Balkanization” of the United States, according to a description of the series on amazon.com.

Roper first joined the racist skinhead movement in the 1980s, but not long after, he became the deputy membership coordinator for the National Alliance, once the most prominent neo-Nazi organization in the United States. In the late 1990s, Roper also joined the white supremacist Council of Conservative Citizens.

More recently, in 2011, Roper joined the Arkansas-based Klan group the Knights of the Ku Klux Klan. After a few years, he left that group and helped to create the anti-Semitic group Divine Truth Ministries (DTM), where he currently serves as DTM Minister Publication and Propaganda.

The rally at Stone Mountain was organized to coincide with Confederate Memorial Weekend. The organizers are calling on “every able bodied soul of [the white] race” to attend Rock Stone Mountain, a “pro-white” demonstration to march against the removal of confederate symbols.

To remove anything that represents the confederacy, according to the Rock Stone Mountain blog used to advertise the event, is “to remove the founding race of America through ethnic cleansing,” causing “the genocide and murder of the White race.”