The case of a Montana man just convicted of felonies as part of his battle with two federal agencies is drawing attention from antigovernment extremist groups who supported the take-over of a wildlife refuge in Oregon. 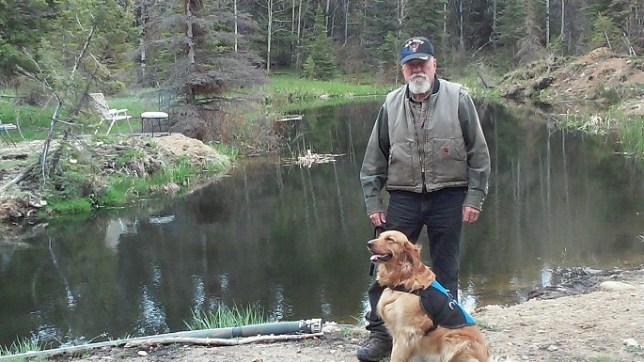 Joseph David Robertson, a 77-year-old retired construction company owner who has battled the federal government for more than a decade, was convicted in April on two counts of unauthorized discharge of pollutants into U.S. waters and a third count of injury or depredation of federal property.

U.S. Forest Service and the Environmental Protection Agency agents investigated a series of illegal ponds Robertson constructed between October 2013 and October 2014 on two properties near Basin, Mont., south of Helena. His actions “resulted in the discharge of dredged and fill material into a tributary and adjacent wetlands located on those two properties, causing widespread damage to both properties,” federal prosecutors said in court filings.

Robertson is scheduled to be sentenced on July 20 in Missoula by Senior U.S. District Judge Donald W. Molloy. He faces fines up to $50,000 per day for illegal discharges into U.S. waters, up to 10 years in prison and a $250,000 fine for damaging federal property.

Already, a variety of far-right antigovernment groups and militias are rallying to Robertson’s defense, with one extremist radio host publicly suggesting there may be the need to take up arms and oppose the “federal supremacists.” The case is garnering attention from Oath Keepers, the John Birch Society, the Coalition of Western States and “Redoubt News” sites supporting an enclave of Patriots in the Northwest.

Robertson was a featured speaker last weekend at a meeting of 100 antigovernment activists – some of them reportedly from as far away as Illinois and Arizona -- who gathered in Plains, Mont.

Rally organizers said it was to support “political prisoners,” including Jake Ryan, of Plains, who is one of the 26 defendants under indictment for their roles in the Oregon refuge takeover.  Like Robertson, Ryan was accused of using heavy equipment to damage federal property.  Organizers claimed the rally was supported by Montana gubernatorial candidate Ted Dunlap, who’s a Libertarian.

Robertson shared the stage with Jeanette Finicum, the widow of LaVoy Finicum, who was fatally shot in January at a police road block established to arrest those extremists including Cliven Bundy’s sons, Ammon and Ryan, who had occupied Malheur National Wildlife with assorted militia groups, including members of the III Percent movement.

Unlike what occurred in Harney County, Ore., where Ammon Bundy and others attempted to influence the local sheriff to intervene on behalf of ranchers Dwight and Steven Hammond, there’s no evidence yet that Robertson’s supporters are pressuring Jefferson County Sheriff Craig Doolittle. He did not return telephone messages left by Hatewatch asking for comment.

Robertson has been described as a “loner” known to carry a sidearm. “I think he’s kind of alienated himself from everybody. That’s my opinion of him,” one fire department official, who knew Robertson, said.

In 2007, Robertson was cited by the Forest Service for destroying government property, livestock grazing without a permit and four other charges related to illegal activities on federally owned land. He refused to show up for his trial, but was found guilty in absentia of two counts of damaging federal property and allowing livestock on Forest Service land. He was fined $2,625, the Billings Gazette reported in 2007.

In 2012, Robertson was again charged and convicted of misdemeanors related to violating Forest Service regulations. He avoided jail, was placed on probation and ordered to remove various structures, including a barn, fence and culvert that he had illegally constructed on federally owned land. When a Forest Service special agent went to the property to see if Robertson was complying with the court’s order, the officer discovered he had illegally constructed ponds on the land.

His first trial on those felony charges last fall resulted in a hung jury, but federal prosecutors sought a retrial which proceeded despite Robertson’s attempts to get the case dismissed.  After his jury conviction in April, the judge denied his request for a new trial.

“Our government has beat us into the ground for no reason,” Robertson told Radio Free Redoubt host John Jacob Schmidt during a podcast last month. Robertson called the federal judge “biased” and said his public defender failed to introduce critical evidence at trial.

“The federal government has their boot on his throat and we can’t stand for this!” Schmidt told his listeners. “It’s intolerable.”

Robertson described himself in the podcast as a disabled Navy veteran who has been treated for Post Traumatic Stress Disorder. “Several years ago before I went into treatment, I would have handled this different,” he said. “But then I would have been in the news.  My wife would probably be dead and so would I and some of those other people.”

Schmidt said the case is similar to what happened to the Hammonds, leading to the Malheur takeover.

“This type of tyranny,” the radio host told Robertson and his listeners, “is what forced people to feel that there’s no other option than to do something drastic like take over a wildlife refuge or to gather militias to hold the federal supremacists back.”

Later, Schmidt advised Robertson to consider another option. “I’m not convinced that we are completely out of options here. We have to resort to, you know, like the 2nd Amendment-type of option.  I know some people are on this.”

Robertson said he understands that the Forest Service intends to drain the ponds he constructed.  “I’ll have some friends up here. I don’t think I’ll allow them to do that.”