A vigilante anti-immigrant group called the Borderkeepers of Alabama is sending teams of men clad in camouflage and equipped with thousands of dollars in military weaponry to patrol for undocumented immigrants in Arizona and New Mexico.

The group, which has been operating since at least 2014, claims as many as eight volunteer “teams” of "redblooded Americans" who, it says, "travel to border towns to work closely with local residents and governmental agencies to limit illegal transient activity." It is one of the latest groups in the nativist extremist movement, which peaked in 2010 and has diminished dramatically since then, to engage in armed citizen border patrols.

Although the Borderkeepers says its mission is to “secure our nation’s border” against undocumented immigrants and drug smugglers, some of its members would like to go far beyond that. In a comment left on a fellow group member’s post some two years ago, an Irvington, Ala. man who goes by the name “Jon Anderson,” proposed massive violence. “Need 240 bravo’s mounted every 100 yards and shoot everybody who tries to force their way in,” he wrote. The M240 Bravo is a machine gun that can fire nearly 16 bullets per second and rip through targets 1,200 yards away.

Another member, identifying himself as Wesley Vance of Montgomery, Ala., said earlier this year that he had travelled some 2,500 miles to join the antigovernment occupiers of the Malheur National Wildlife Refuge in Oregon. Twenty-seven of those occupiers were arrested after a 41-day standoff and now face federal felony conspiracy charges. Vance was apparently not one of them.

“Crying f----- shame the feds are going to investigate the feds,” Vance wrote on March 8, referring to a probe of the apparently justified police killing of Lavoy Finicum, an occupation spokesman who tried to draw a gun on arresting officers. “They murdered lavoy is the bottom line. Shot the man three times in the back. I wish the f----- f------ would come to my house!” A few days earlier, he wrote that “patriots are so oppressed and scared of the government, they are scared they will die.” In his own case, Vance boasted that he would “DIE BEFORE I GET ON MY KNEES AND BOW DOWN TO THEM AND LIVE IN FEAR.” 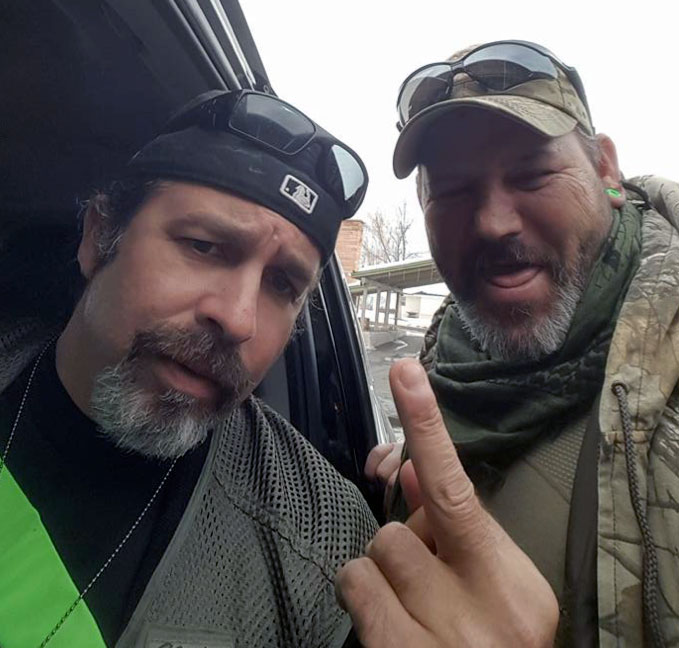 Vance (right) poses with Pete Santilli, a well-known antigovernment mouthpiece who was among those charged with conspiracy and other crimes following the armed occupation of the Malheur National Wildlife Refuge near Burns, Ore. The photograph was posted to Vance’s Facebook page on January 24, 2016.

A poster who apparently is not a Borderkeepers member responded to Vance’s comments: “All this country needs are about 100,000 patriots to arm up and start killing off some of these f------- liberals!”

The group has managed to stop at least some border crossers at gunpoint. In an August 2016 Facebook post, Jimmy “Bull” Bonham, an administrator of the group’s Facebook page, said that members had managed to detain two out of a group of four drug smugglers. He wrote that the “bp” — the Border Patrol — had then taken “140 pounds of dope” that the Borderkeepers had apparently seized from the men. It is unclear how closely the Border Patrol may have worked with the Borderkeepers. 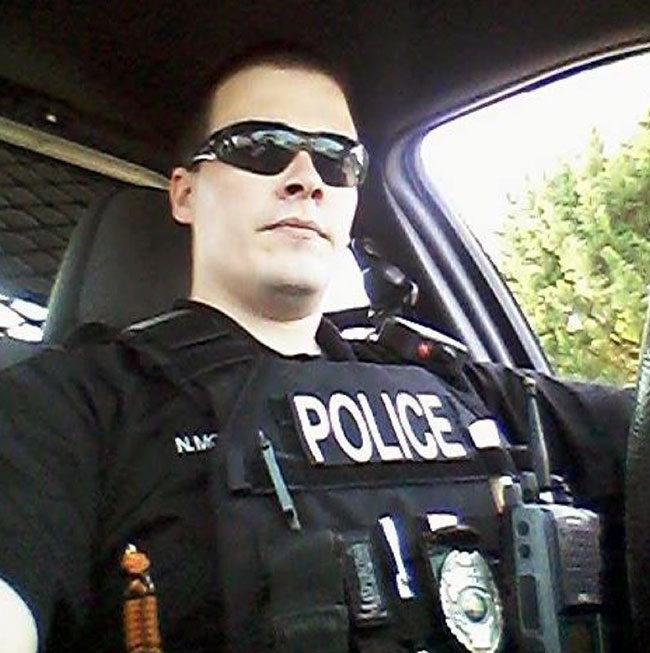 "Jon Anderson" posted a photo of himself in a police uniform while appearing to be sitting in a squad car in late July. The photo was since removed from his Facebook page.

But the group, many of whose members appear to engage in serious military training, may have connections to others in law enforcement. In April, Anderson posted a photo of an application to a police department in southern Alabama. He has since posted photos of himself in uniform and in a squad car, suggesting that he was indeed hired. A few other members of the group’s Facebook page list connections to law enforcement agencies, but these alleged ties have not been verified.

Early on in the group’s operations, in 2014, it was working out of a patrol base in Brownsville, Texas, known as “Camp Lone Star.” But in August of that year, camp boss Kevin “KC” Massey was arrested for being a convicted felon in possession of firearms. The camp closed, and Borderkeepers operations moved to the west. 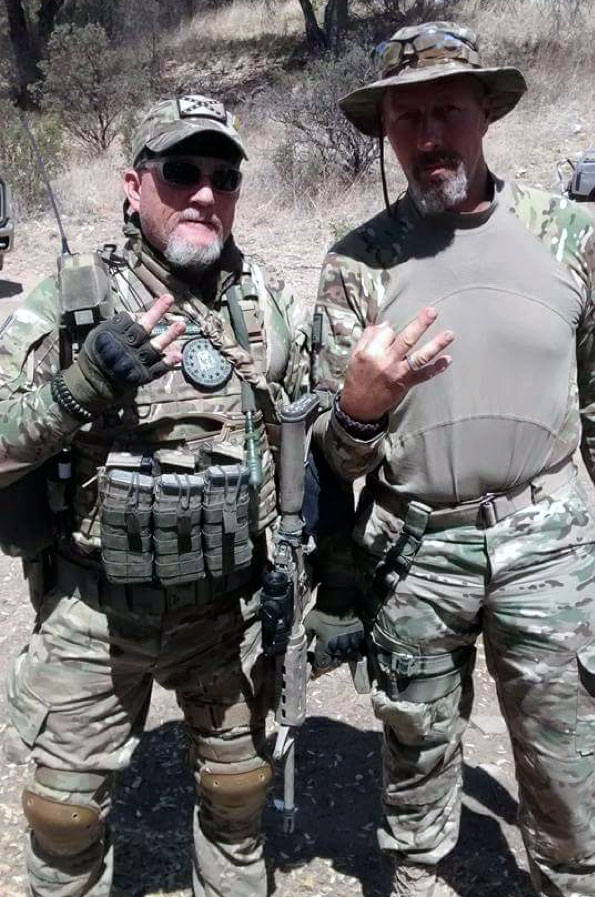 Brian "Geezer" Henderson (left) with Jerry "Ghost" Karl on a border operation. Henderson was tagged in this photo by a fellow Borderkeeper on April 18, 2016.

Locals do not remember Camp Lone Star fondly. The owner of the property told reporters that he regretted loaning it, and said participants “jeopardized my safety.” Another local resident told the Texas Observer earlier that the group “makes us feel less safe, not more safe,” and added, “I just hope they leave soon.”

Despite all the military equipment and tough talk, Borderkeepers operations do not always go very professionally. According to posts on the group’s Facebook page, a member named Brian Keith Henderson — a Tuscaloosa, Ala., man who “liked” Anderson’s post about turning the border into a kill zone — mistook a cactus plant for some kind of threat. “What the hell is that?” he reportedly yelled before training his assault rifle of the wholly innocent cactus and very nearly blasting it to smithereens.

Henderson was kicked out of the group as a result. Henderson, whose writings make clear that he subscribes to the radical antigovernment “sovereign citizens” movement, now leads the Three Percent United Patriots of Alabama. Many members of that group are also members of the Borderkeepers Facebook group. 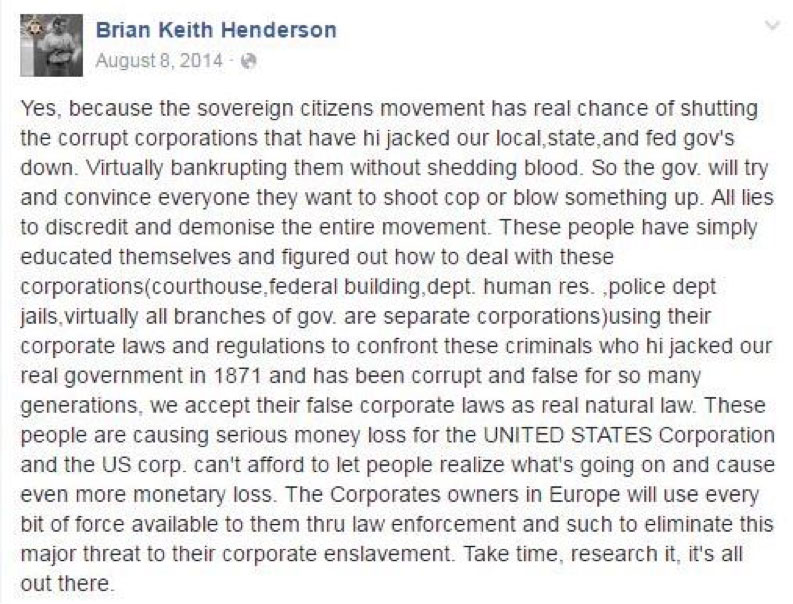 Henderson exposes his sovereign citizen leanings in one of several 2014 posts to his Facebook page.

The apparent leader of the Borderkeepers of Alabama is Ron “Cornbread” Stone, one of its Facebook page administrators and the primary organizer of its border teams. Other principals are also Facebook moderators, including a woman who identifies herself as Lisa Marie and Bonham. The group’s Facebook page asks that donations be sent to “A.D. Vance” of Clanton, Ala. 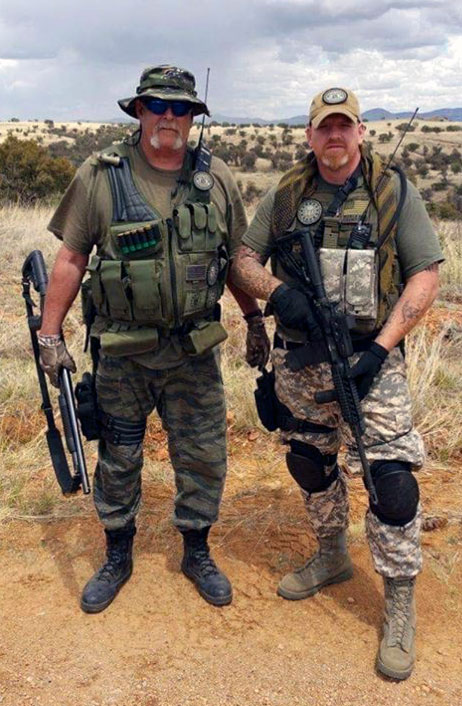 Ron “Cornbread” Stone (left) and Jimmy “Bull” Bonham posing for a photograph during a border operation. The photo was posted to Ron Stone's Facebook page on July 24, 2016.

The nativist extremist movement of which the Borderkeepers is a part began around 2005 and swelled to some 319 groups, many of which used “Minutemen” as part of their names, by 2010. Since then, it has declined to some 20 groups. That is largely because much of the movement’s fire was stolen by state legislatures that passed harsh anti-immigrant laws like those of Arizona and Alabama. Donald Trump’s more recent attacks on immigrants have had a similar effect.

Jerry “Ghost” Karl, an Arizona militia leader who leads Borderkeepers operations in Arizona, put it like this to a reporter with WIAT-TV of Birmingham: “Trump talks about building a wall. Well, we’re that wall right now.”