Longtime white supremacist Ronald “Dozer” Pulcher II, of Galeton, Penn., was arrested October 29 and charged with multiple felonies after a search of a home he resides in revealed marijuana plants and firearms.

Pulcher is a convicted felon who calls himself the “Aryan Strikeforce/Combat 18 Vinland Division President.” Aryan Strikeforce is a racist skinhead group in New Jersey headed by Josh Steever. Pulcher goes by the name “Dozer Big” on the Russian social media site VK, popular among white supremacists, and he sports a number of racist tattoos including the number 88 and a swastika. 88 means "Heil Hitler" -- H is the eighth letter of the alphabet. 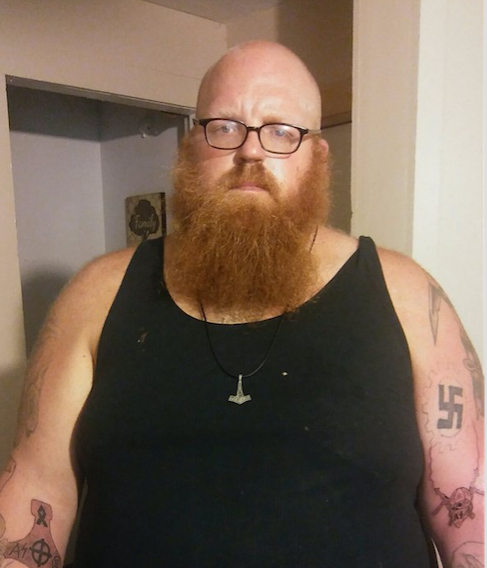 Pulcher's arrest record is lengthy, and includes a 10-year stint in prison for aggravated assault on a black man, according to a report in the Olean Times-Herald. Pulcher's activism in the racist skinhead world is as lengthy as his rap sheet. A photo posted at his VK account shows him at a 2003 gathering of the group American Thule Society, a now-defunct skinhead group. In a comment on the picture he posted, he wrote, “If you Google pa skinheads this is the first picture that shows up.... I guess I been around for a long time lol.”

He recently participated in a number of racist gatherings, including one held by the neo-Nazi National Socialist Movement (NSM) on August 13 and another billed as a “white solidarity meeting” co-organized by Aryan Strikeforce and NSM on September 3. Both events were held at the same location in Ulysses, Penn. Pulcher posted pictures on his VK account of the August 13 event where he can be seen holding an NSM flag with Steve Bowers, an NSM regional leader, while doing a Nazi salute. 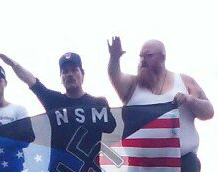 Earlier this year, Aryan Strikeforce was part of a larger and ultimately unsuccessful coalition called the Aryan National Alliance. That failed project has been rebranded with a new name: Nationalist Front, led by NSM and the Traditionalist Workers Party (TWP), an organization headed by white nationalist Matthew Heimbach. Aryan Strikeforce remains a part of the rebranded coalition.

Pulcher’s arrest is the latest example of criminality and/or violence associated with the Nationalist Front. This, despite claims from TWP and Heimbach that their mission is dedicated to “faith, family and folk.”

His arrest also comes on the eve of another NSM gathering, its biannual rally, set for this Saturday, November 5 in Harrisburg, Penn, where Heimbach is scheduled to speak.