In the month following the election, extremists on Twitter exalted in the election of President-elect Donald Trump by circulating a number of memes and images, many of which targeted Muslims, in an attack on political correctness that mirrored a terrifying emergence of hate incidents.

A Hatewatch analysis compiled from social media data related to more than 1,800 extremist Twitter accounts found that more than 1,750 unique photos and memes were distributed over a month-long period between Nov. 8 and Dec. 8. (Twitter has since suspended some of these accounts as it continues to face high public scrutiny for what role in played amplifying hate during the campaign.)

But the pattern suggests a wide distribution of hate imagery. While images and memes that expressed anti-Muslim rhetoric and imagery, 75 in total, accounted for only about 4 percent of the total distributed images, these images were shared on a much larger scale. A single image or meme, in fact, was often shared well over 100 times. In total the images were redistributed more than 2,750 times.

One image depicted London Mayor Sadiq Khanas as a Pokémon character named “Hamaskhan,” with the accompanying description: “Probably the most dangerous Pokémon, Hamaskhan believes that Londoners should learn to accept Islamic terrorism whilst he is mayor.” Another photo, shared by over 40 people shows a father and son holding swords. A caption imposed over the image read, “1/4 of US Muslims polled agree VIOLENCE is ok against those that offend Islam!” Another meme called President Obama “Islam’s Trojan racist jihadi.” One disturbing image was a map showing the locations of three Islamic Centers in Oakland, Calif. The image was shared more 92 times.

A number of images and memes were either produced by or made reference to anti-Muslim hate groups. Most prevalent among such groups was the Center for Security Policy (CSP), a one-time hawkish think tank that has become a conspiracy-oriented mouthpiece for the growing anti-Muslim movement in the United States. Among CSP’s claims are that the Muslim Brotherhood has infiltrated all levels of government, and the American Freedom Defense Initiative (AFDI), a group run by Pamela Geller, who has claimed that President Obama is the “love child” of Malcolm X and once said, “I believe in the idea of a moderate Muslim. I do not believe in the idea of a moderate Islam.”

Many of the AFDI images originate from an advertising campaign AFDI ran on public transportation in major cities in the U.S., including slogans such as “Islamic Jew Hatred, It’s in the Quran.” Another AFDI meme shared after the election depicted two men with nooses around their necks with the words and the caption, “This is Islamic Apartheid. Gay Under Islamic Law (Sharia).”

Some of the CSP images shared originated from a 2012 video series that claimed to expose the Muslim Brotherhood’s successful efforts to infiltrate American society and government. Screen captures from videos produced by anti-Muslim speaker Bill Warner, a former physics professor who sometimes uses the name “Bill French.” Warner once said, "The two driving forces of our civilization are the Golden Rule and critical thought. … There is no Golden Rule in Islam. ... There is not really even a Ten Commandments."

Other memes and images were clearly an attempt to demonize Islam and Muslims. Some photographs depicted women being whipped and stoned in foreign countries –– images commonly used by racists and anti-Muslim activists to claim that this behavior stands for all of Islam. Others centered on a conspiracy theory popularized worldwide that Islam is taking over Europe as a result of this year's Syria refugee influx. 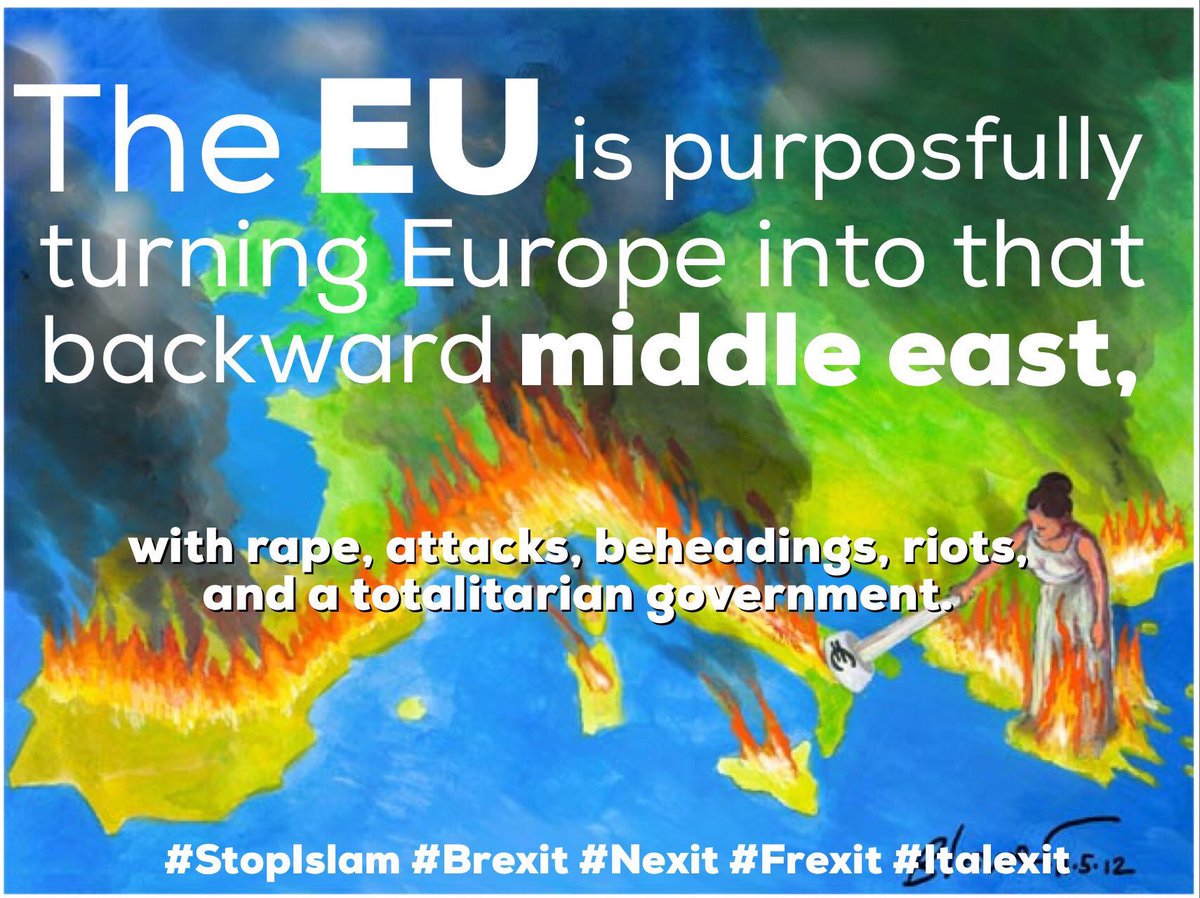 A politicized map of the European Union distributed on Twitter.

One meme on this subject depicted a map of Europe on fire with the words, “The EU is purposefully turning Europe into that backward Middle East, with rape, attacks, beheadings, riots and a totalitarian government.” An image shared multiple times depicted German Chancellor Angela Merkel with her hands covered in blood, clearly a reference to Germany’s welcoming policy towards refugees. Another Muslim meme places a photograph of President Obama making the “peace” sign surrounded by photographs of Muslims surrounded by a number of people who have been convicted of terror offenses. 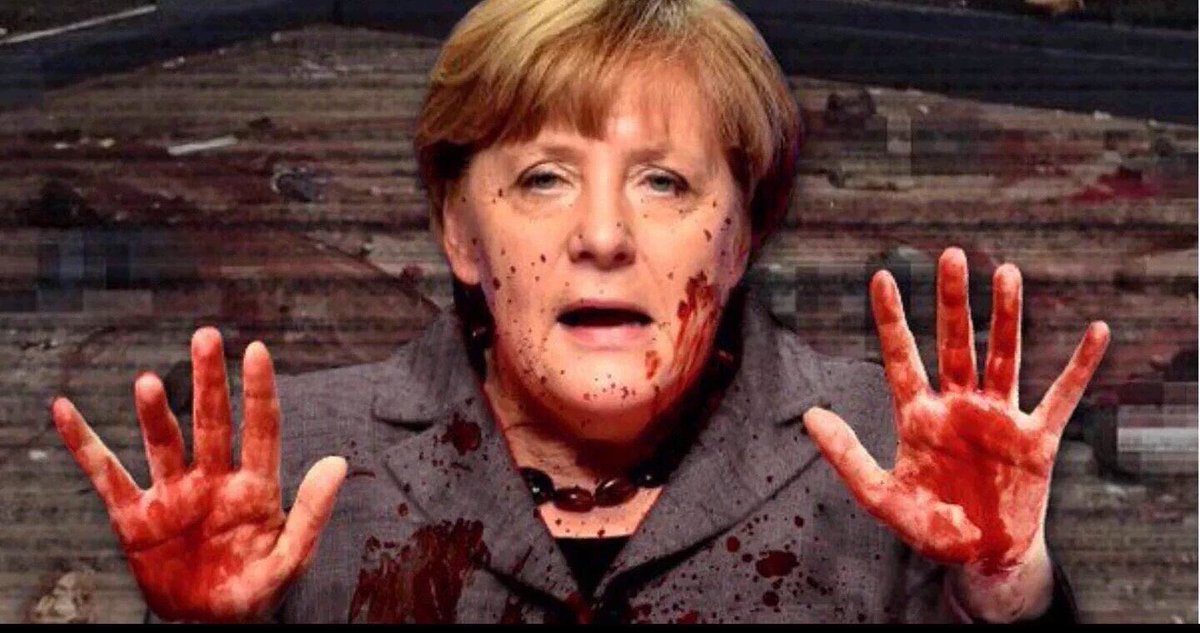 An edited picture of German Chancellor Angela Merkel distributed by extremists on Twitter in the month after the election.

In total, more than 80 tweets depicted ISIS terrorists or terrorist attacks committed by Muslims. These images were shared almost 4,000 times. Many of these focused on Abdul Razak Ali Artan, an Ohio State University student who plowed a car into a campus crowd and stabbed people with a butcher knife in an ambush that ended when a police officer shot him dead.

When you add the total number of images/memes that focused on Islam, Muslims, or those perceived to be, more than 250 images were shard. But, again, the number of times those images were shared is on a much larger scale, just under 6,800 times.

The analysis also reflects a troubling anti-Muslim climate in the real world. The FBI’s recently released hate crime statistics for 2015 showing that anti-Muslim hate crimes increased by two-thirds from the previous year. A separate SPLC analysis of hate incidents following Trump’s election found that 49 of the 867 incident reported in a period of ten days following the election were directed towards Muslims or those perceived to be Muslim. Trump has also hired anti-Muslim figures as his advisors and tapped figures closely tied to anti-Muslim organizations as part of his cabinet.