Following a “Southern Alt-Right” gathering last weekend in Georgia, Brad Griffin, who runs the white nationalist website Occidental Dissent and headlined the event, updated his blog with a flashy new banner and a new brand to sell –– the Alt-South. 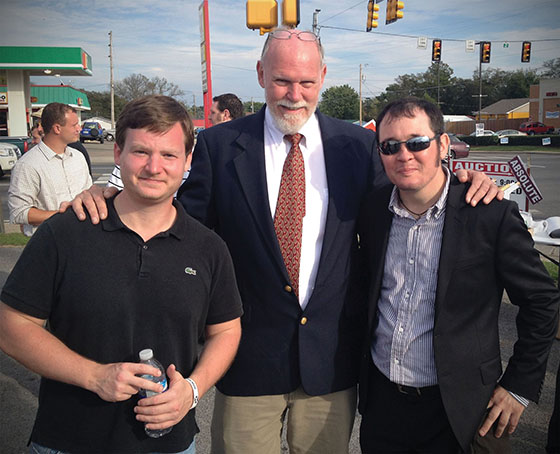 The idea, dovetailing the resurgence of white nationalism rebranded as the “Alt-Right,” is a clear attempt to parlay that movement’s success in the last two years into a web-savvy revival of an increasingly aging neo-Confederate movement.

“Southern Nationalism has become a bit unglued,” Griffin, who writes under the pseudonym “Hunter Wallace,” wrote on his website. “Basically, the Alt-South would be a space for everyone in Dixie who isn’t some kind of leftist or mainstream conservative (i.e. nationalist, populists, reactionaries) to come together.”

Of course, Griffin’s efforts to rebrand the neo-Confederate movement are more complex than that. As Hatewatch has previously documented, a rift between Michael Hill, who leads the League of the South (LOS), and his younger, more tech-savvy base has grown in recent years.

In a blog published yesterday titled “The Alternative South,” Griffin discusses a number of concerns stemming from his involvement with the League: the group’s push towards public demonstrations in the latter years of the Obama administration, Hill’s increasingly divisive militancy, and his own vision for a new reactionary movement geared towards advancing the neo-Confederate cause under President Trump.

While writing fondly in the piece of his time in the League, Griffin also rebuked Hill for not having “adapted to the Trump era.”

“The crisis began around late 2014 when a year and a half of public rallies by the League of the South had begun to take its toll,” Griffin wrote. “During the first half of 2015, the pace of our public rallies began to slow down. … That was the case until the Dylann Roof mass shooting in Charleston. … The Southern Heritage movement and the League were briefly reenergized. We held more rallies than ever before, but eventually the news cycle rolled on.”

What role Griffin will play in this “Alt-South” isn’t discussed, and it seems unlikely Griffin will be developing his Southern Alt-Right in the real world. He lacks real-world organizing skills and admittedly disdains outdoor activity. While footage of his address at this weekend’s forum is not available, his “Blood and Soil” speech at a 2015 Florida LOS conference shows he struggles with public speaking. Griffin, too, acknowledges that the work needed to build the Alt-South will happen online.

“Perhaps the most important thing we need to be doing is mastering and building up our presence on social media platforms: Twitter, Facebook, YouTube and Periscope,” Griffin wrote. “The Rebel Yell podcast is a great example of the content we ought to be producing. Ideally, we would have the means to distribute our content (blogs, podcasts, e-books) to large receptive audiences.”

Using social media effectively remains one of the League’s key failings. While Hill has made abortive attempts to promote memes and use social media strategies to spread the League’s message, Alt-Right extremists have excelled, gaming Twitter’s weak hate speech policing standards and mastering the language that makes a meme go viral.

Griffin has recognized that success and seeks to siphon unruly, younger LOS members from the League and into his big-tent alternative with Michael Cushman, who fled the League in the 2015, and other TRS Confederates.

After all, Griffin’s choice for the new Occidental Dissent banner features a split rendition of the Confederate Battle Flag and Cushman’s blacked-out adaptation, which the LOS has also championed.

Griffin’s choice to make that switch two days after the Atlanta forum is remarkable in that his banner closely resembles the Atlanta Forum logo, which consists of an escutcheon featuring the CBF and “Cushman Flag” as its quartered coat of arms. Rising above is the occultist Sonnenrad, a prominent symbol in neo-Nazi imagery. The logo was first unveiled in November 2016, when the TRS Confederates, riding high on Donald Trump’s electoral victory, announced the forum.

While the neo-Confederate and neo-Nazi movements have documented crossover (Cushman was also a member of the National Alliance), the inclusion of the black sun with the vaunted icon of the Confederacy and its bastard spawn is a clear appeal to young neo-Pagans and Internet Nazis, a group consistently demonized by the predominantly Christian LOS members and leadership.

Griffin’s participation in the Atlanta Forum, his blossoming relationships with Alt-Right figures like the TRS Confederates and Richard Spencer, and his remarks in “The Alternative South” indicate the emergence of a new neo-Confederate faction well outside Michael’s Hill’s aged concept of Southern Nationalism.

“This was really the first event of its kind in Dixie,” Cushman wrote in a lauding post on Griffin’s blog. “It showed the experience of Altright [sic] and Southern nationalist leaders in the region as well as the great potential support which mostly lies untapped.”