Shooting victims included his godfather, a paramedic and an innocent bystander.

On Monday, Derick Lamont Brown shot and killed his godfather and roommate Arthur Riggins, 67 while his girlfriend fled from the home in fear.  Then Brown stepped outside and opened fire on his 24-year-old neighbor, two paramedics who had arrived and attempted to assist the neighbor, and the Dallas Police Officers who pulled up on the scene. Paramedic William An, an 11-year veteran of Dallas Fire-Rescue was hit. Police returned fire, pulling the neighbor and An to safety and rushing them to the ICU. One officer was injured and Brown was thought to be shot by a non-fatal bullet.

During the melee, Brown disappeared and police began a door-to-door search of the area. Approximately two hours later, SWAT teams arrived on the scene and sent a robot into Brown’s home where they found two bodies, Brown’s godfather’s and his own. Brown died from a self-inflicted gunshot wound. His neighbor remains in intensive care and An, who underwent lifesaving surgery, survived but will “have to undergo extensive medical treatment” according to Dallas’ Mayor Mike Rawlings. An officer was also hit with a suspected bullet fragment and was treated at the scene.

Brown was the former Chairman for the Dallas chapter of the New Black Panther Party, a black separatist group. The party leadership changed in 2013 after an internal dispute and Brown allied himself with the departing leaders Malik Shabazz and Hashim Nzinga who formed the New Black Panther Party for Self Defense. During Brown’s time as Chairman, he helped hold a protest at a Dallas police station where he told media “As the vanguard in the community, we are here to stand to say it's our power to the people that we're willing to defend by any cause and every cause.” And as a last resort “If that takes fighting back, Lord have mercy for me on what should happen on the streets, but I'm willing."

Up until his death, Brown was still a member of the militant black power family that resides in Texas and beyond. In March, he shared the comment “Every New Panther strives to unite our people, into one common struggle” to his Facebook page. He took part in a CERT exercise where he videotaped himself and his group “Holding it down for the green, red and black”, which are the colors of the New Black Panthers for Self Defense flag. He also publicly supported the efforts of Hashim Nzinga.

Brown is linked on Facebook to the Black Riders Liberation Party and received a tribute from Babu Omowale, Minister of the People’s New Black Panther Party. 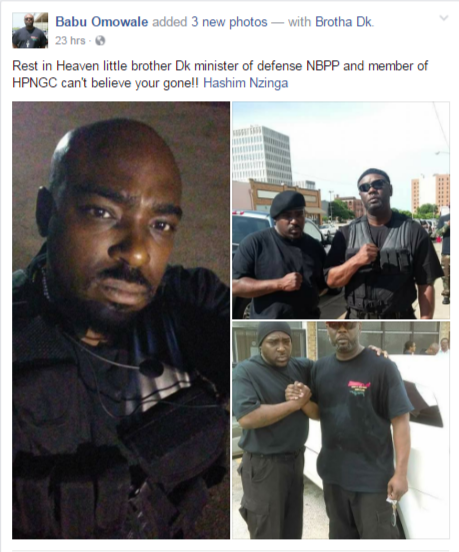 These groups tend to be anti-white, anti-Semitic, interested in creating a black independent state in America, and are well trained in firearms.

Dallas shooter Micah Xavier Johnson was once a member of the Houston New Black Panther Party before being blacklisted by them.