The longtime political strategist, whose illustrious career spans more than four decades may have chosen his newest cause —defending the Bundy family, — to return him to the public eye. Curiously, after all his years in government, this meant aligning himself with men charged with conspiracy to commit an offense against the United States.

Stone’s newest cause  célèbre involves Cliven,  Ammon and Ryan Bundy who in 2014 famously initiated an armed standoff against the Bureau of Land Management at their Nevada ranch when the agency came to collect overdue grazing fees incurred by the family’s patriarch Cliven Bundy. In 2016, Ammon Bundy perpetrated another standoff when he and his supporters occupied the Malheur Federal Wildlife Refuge in Oregon. Ammon was acquitted for his part in Malheur, but he, Ryan and Cliven are currently facing trial for their roles in the Nevada.

Stone made his support for the Bundys and their followers public when he spoke at a Las Vegas fundraiser on July 15. After stepping up to the stage, his first words, partially drowned out by attendee applause, were, “I am here for one reason: I stand in solidarity with every member of the Bundy Family …  ”

He went on to call the FBI agents involved in ending the Malheur occupation “Federal mercenaries,” claiming Lavoy Finicum otherwise known as “Tarpman” — was murdered in cold blood, which brought “death and dishonor to our country.”

According to Stone, the government’s prosecution of the Bundys is the “oppressive hand of a military jack-booted government that has lost all sense of reality, of law, morality or the U.S. constitution.” Further, he denounces Gloria Navarro, the Nevada judge presiding over the “Battle of Bunkerville” trial as “outrageous,” “unconstitutional” and a “disgrace” to the judiciary.

These sentiments are in line with many of the Bundys’ supporters who have disparaged the judge’s reputation and made a number of veiled threats against her, which Stone’s words are more likely to validate than prevent.

Stone has a plan for getting the Bundys released, which involves his friend and former client, Donald J. Trump. The president, says Stone, needs to “pardon every member of the Bundy family.” Stone is pushing a presidential pardon through a petition created on the Infowars website, which is run by another friend of his, rabid conspiracy theorist Alex Jones.

Stone has also been a frequent guest on a radio network owned by Sam Bushman who has openly supported the Bundys, as has James Edwards, the white nationalist who hosts the show Political Cesspool, which plays on Bushman’s network. They are part of a group called the Freedom Coalition, which includes Judge Andrew Napolitano, who Stone has credited with sending him information on the Bundy’s case.

Up until now, Stone has been known for lobbying and cutthroat political tactics he’s been employing since the days when he worked in the Nixon White House. Richard Nixon, according to Stone’s mother, was like a god to her son, and Stone has a tattoo of Nixon’s face on his back.

Stone bragged in Get Me Roger Stone, a documentary, about his controversial career, that he lives “a pretty Machiavellian life.” He is known within political circles as a brazen rabble rouser who has been “everywhere dark and ugly in our politics” and “peddles garbage conspiracy theories” according to Harry Siegel of the New York Daily News. 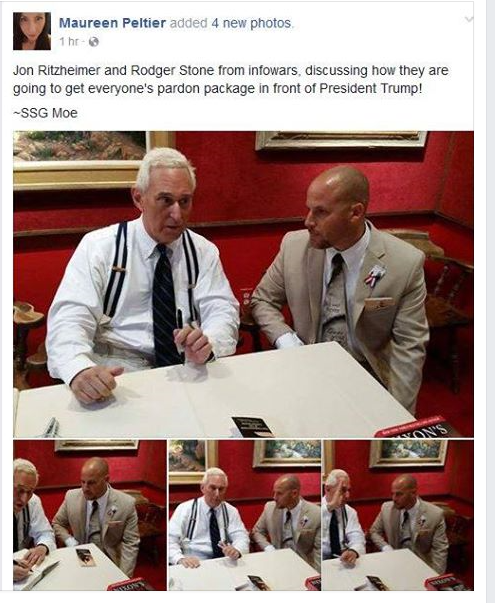 Stone, who crafted a political rule for himself and others that “Hate is a stronger motivator than love,” has interviewed with the anti-Semitic weekly American Free Press, dedicated one of his books to holocaust denier Victor Thorn and used a number of race-based attacks, calling people “stupid Negro,” “House Negro,” N----,” “Uncle Tom,” “Arrogant Know-It-All Negro” and more.”

With his show of support for the Bundys, he is attacking the government on behalf of people accused of conspiring against it, while once again making a name for himself on the national stage. As Stone himself put it, “the only thing I can think of that’s worse than being talked about, is not being talked about.”